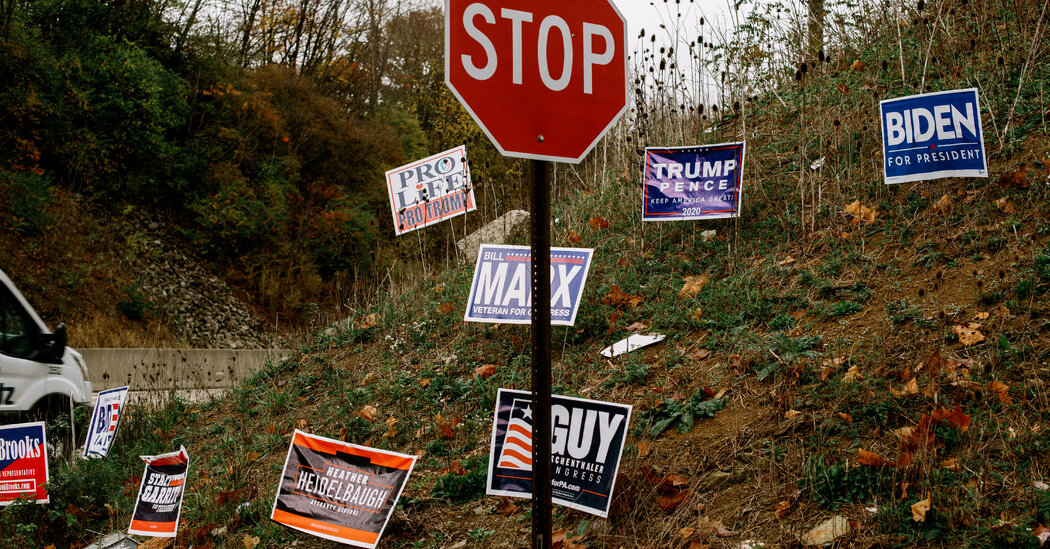 Fights over political signs happen every year, but this year seems more intense. “It feels like a war,” one resident said.

Campaign signs dot the slope of a hill in Murrysville, Pa.Credit…Kristian Thacker for The New York Times

CHICAGO — In Illinois, Florida and Arizona, police officers have been summoned to investigate Biden signs set ablaze and Trump flags swiped in the night. Homeowners, angry over their campaign signs disappearing, have set up elaborate motion-activated cameras to catch the culprits. A sneaky few have booby-trapped signs with sharp razor blades glinting underneath.

With the presidential election only days away, Americans are lining up against one another, sometimes right in their own front yards.

“There’s just a lot of bad feelings now, and this is what it comes to,” said Annie Phillips, 82, a retired educator in suburban Seattle who had two Biden signs stolen from her front yard. “I’m holding my breath until the election is settled.”

Fed up after her second sign was taken, Ms. Phillips bought a third one and nailed it to her garage door.

Americans are bubbling over with tension and dread. They have endured a long, combative campaign in the midst of a pandemic and a complicated voting process with an uncertain outcome.

Both sides are reporting acts of political vandalism.

Paul Barden, of Normandy Park, Wash., was puttering around his house on a quiet street last month when an unfamiliar white car, slowing to a stop outside, briefly caught his eye through the window.

He thought little of it until later, when he stepped outside and made an infuriating discovery: His brand-new Trump flag, carefully hung earlier that day from tiny hooks under the eaves, had vanished. Whoever had filched it was long gone.

“A lowlife sneak thief,” he railed on the app Nextdoor, informing his neighbors of the incident.

To Mr. Barden, a former Republican state representative who had served in the Marines, the incident distilled everything that seemed to be happening around him in the country lately. A lack of civility and decorum. A growing sense of chaos.

“And yet I hadn’t noticed it manifesting itself in my little corner of the world,” Mr. Barden said last week. “Until my flag was taken.”

Skirmishes over yard signs, flags and other expressions of candidate loyalty emerge with regularity every election season, but this year seems more intense.

In Volusia County, Fla., a neighbor punched another in the face because he believed that his own Trump sign was blocked by his neighbor’s Biden sign, the authorities said.

Trump-Pence signs have been defaced with stickers. Biden-Harris signs have been kicked down in the grass. In central Iowa, a Trump sign along a highway was partially covered with a sheet of black metal spray-painted with Bible verse: “Love One Another. John 15.” On a country road in northeastern Wisconsin this fall, a large Biden sign stood pockmarked with fist-sized holes, flaps of shorn sign fluttering in the wind.

A Trump sign, booby-trapped with hidden razor blades, injured a worker in Michigan who was moving it because it had been placed too close to a roadway, sending him to the hospital to get his bloodied hand stitched up.

The tumult comes as the demand for campaign signs has exploded in some regions. Steven Slugocki, chairman of the Democratic Party in Maricopa County, Ariz., said he was seeing ten times as many requests for signs as in 2016.

“It’s this interesting dynamic because everybody wants a sign, but people get a sign and it gets stolen,” he said. “It does make people a little more hesitant to put it up, especially in the front yard, but demand has been through the roof.”

Scott Dressel, public information officer for the Highlands County, Fla., sheriff’s department, became so fed up with sign wars in his county that he took to Facebook with a post begging residents to knock it off.

“Guess this is a message we are going to have to put out every election season from now on because people don’t know how to behave like rational adults: DON’T STEAL OR DEFACE CAMPAIGN SIGNS,” he wrote. (He suggested that they vote, write a letter to the editor or cover their cars in political bumper stickers instead.)

Mr. Dressel said he had been set off by the events of the weekend prior.

One particular neighborhood, which happened to be his own, was hit hard by people stealing Biden signs. Not long afterward, somebody — or somebodies — defaced a line of Trump signs on a main highway that runs through the county.

“They sprayed a big ‘X’ on them, sprayed other things on there that I can’t repeat,” Mr. Dressel said. “We realize everybody’s tense. I’m 50 years old and I’ve never seen a presidential election that has been this antagonistic.”

In Murrysville, Pa., the “Route 22 battle royale,” as described by the Pittsburgh Tribune Review, began innocently enough. On one side of the road, supporters of Mr. Trump turned a former salon into a “Trump Victory Center,” decked out in red, white and blue. Less than half a mile away, volunteers in favor of Mr. Biden staked out ground in a medical office building, complete with a cutout of the former vice president, smiling and wearing a blue face mask.

When local Republicans held a rally that was expected to draw hundreds of cars along Route 22, Democrats executed a “blitz,” lining the road with signs supporting Biden-Harris.

“It feels like a war,” said Michelle McFall, a local Democratic organizer who helped form the grass-roots group for Mr. Biden. “People are holding their ground as they would in battle, and they are strategically planning their actions and counter actions.”

Here’s a guide to The Times’s election night coverage, no matter when, how or how often you want to consume it.

By the next day, the Republicans had put up counter messages taking aim at Mr. Biden’s long political career: “Drain the Swamp.”

Jill Cooper, the local chairwoman for the Trump Victory Center on Route 22, said they are working hard to turn out the vote and positioned themselves on a main road to send a message to Republican voters.

“They can be proud to support the president, that they are not racist, they are not xenophobic, they are not sexist, things the media and other people always accuse us of,” Ms. Cooper said. “That’s why we’re on 22, where 30,000 cars go by a day. We want them to know: ‘You are not alone.’”

On one farm in western Massachusetts last month, one act of campaign destruction went far beyond swiping signs back and forth.

Dicken Crane, in October, with his hay bales at his farm in Dalton, Mass.Credit…Gillian Jones/The Berkshire Eagle via, Associated Press

Ruth Crane and her husband, Dicken, who is a fourth-generation farmer, decided to spray-paint a display of hay bales with the words “Biden Harris,” letting passing motorists know of their support for the Democratic presidential ticket.

It was only the next day when Ms. Crane received a frantic call: Someone had lit the bales on fire, burning the entire display to the ground.

The community, a mix of Republicans and Democrats, poured donations and messages of support to the Cranes. A man was quickly arrested and charged with the crime.

“It was a bit of a wake-up to people,” Ms. Crane said. “We received that message from a lot of people, from both sides, who said, ‘This is out of hand.’”

Tooth-billed Pigeon: Is there hope for the Little Dodo?