Republicans, Not Biden, Are About to Raise Your Taxes 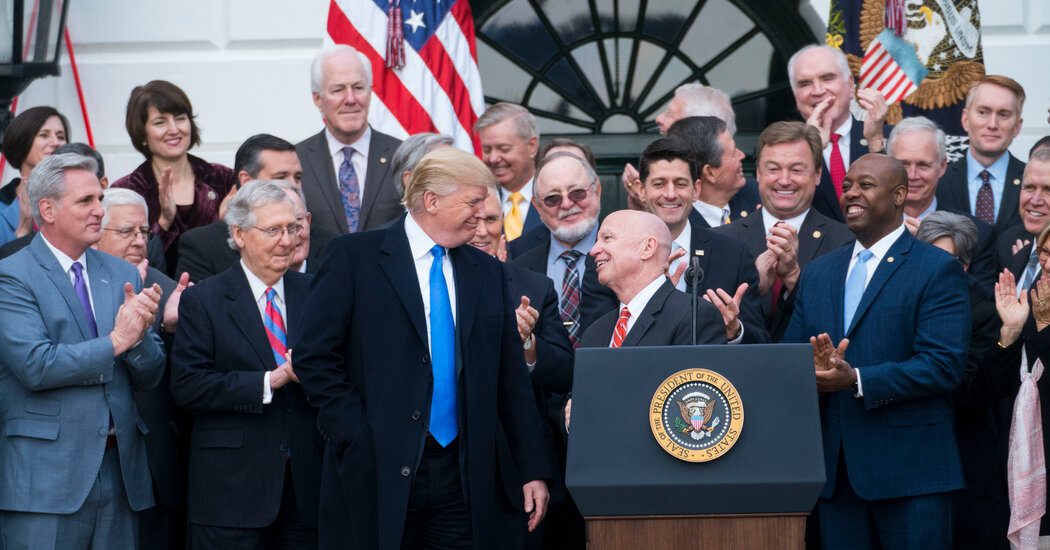 President Trump built in tax increases beginning in 2021, for nearly everyone but those at the very top.

Mr. Stiglitz, a university professor at Columbia, is a Nobel laureate in economics.

The Trump administration has a dirty little secret: It’s not just planning to increase taxes on most Americans. The increase has already been signed, sealed and delivered, buried in the pages of the 2017 Tax Cuts and Jobs Act.

President Trump and his congressional allies hoodwinked us. The law they passed initially lowered taxes for most Americans, but it built in automatic, stepped tax increases every two years that begin in 2021 and that by 2027 would affect nearly everyone but people at the top of the economic hierarchy. All taxpayer income groups with incomes of $75,000 and under — that’s about 65 percent of taxpayers — will face a higher tax rate in 2027 than in 2019.

For most, in fact, it’s a delayed tax increase dressed up as a tax cut. How many times have you heard Trump and his allies mention that? They surmised — correctly, so far — that if they waited to add the tax increases until after the 2020 election, few of the people most affected were likely to remember who was responsible.

Looking at the analyses of the nonpartisan Congressional Budget Office and the Joint Committee on Taxation at the time the December 2017 tax bill was enacted, we see very clearly how different income groups are affected by the Trump tax plan. And it’s disturbing.

Of course, the poor have never mattered much to the Republican Party, but those on the edge of poverty have been particularly hard hit by the pandemic and the recession it has caused, so Trump’s planned tax increases seem especially heartless, and impractical, when you consider that their higher tax payments, while a huge burden for them, will add little to the budget.

By 2027, when the law’s provisions are set to be fully enacted, with the stealth tax increases complete, the country will be neatly divided into two groups: Those making over $100,000 will on average get a tax cut. Those earning under $100,000 — an income bracket encompassing three-quarters of taxpayers — will not.

At the same time, Trump has given his peers, people with annual incomes in excess of $1 million dollars, or the top 0.3 percent in the country, a huge gift: The Joint Committee on Taxation estimated the average tax rate in 2019 for this group to be 2.3 percentage points lower than before the tax cut, saving the average taxpayer in this group over $64,000 — more than the average American family makes in a year.

The tax loss and benefit estimates just described were calculated before the pandemic. Now, incomes for almost everyone but top earners have taken a hit, so the loser group will likely be considerably larger than anticipated; and with people like Jeff Bezos, the billionaire chief executive of Amazon, doing even better than expected, Trump’s gift to him is even bigger.

This analysis makes clear that the vast majority of Americans will be better off with the likely tax reforms that will emerge from a Biden administration than they would be by sticking with Mr. Trump’s ill-conceived tax bill. You might well ask: Why didn’t Mr. Trump just give everyone a tax cut? The Republicans — who suddenly lost their grasp on their self-described fiscal conservatism when they came into office in 2017 — saw a chance to give their rich friends and corporations a big thank you for campaign contributions. But the tax cuts they promised these donors produced projections that the resulting budget deficits were well beyond $1 trillion.

To reduce that stomach-churning amount, they had to phase-in higher taxes on ordinary Americans. While this kind of budget gimmickry has been used before under President George W. Bush’s administration, Mr. Trump carried it to a new level.

The Republicans have one more feeble defense: their old friend trickle-down economics. The tax cut to the corporations would, they promised, trickle-down to citizens at the bottom of the income ladder. We’ve now seen how that hasn’t happened. In fact the money gushed up to those at the very top in the form of stockholder dividends, chief executive bonuses and a record level of stock buybacks (nearly $1 trillion in 2018 alone.)

Some economic models predicted the Trump tax law would lead to significantly higher wages because of more investment and higher growth. But projections showed that when the 2017 bill’s temporary tax cuts changed to tax increases, growth would likely slow significantly and wage increases would be anemic. And those calculations were made before the pandemic hit.

Mark Zandi and Bernard Yaros of Moody’s Analytics have done the most credible and thorough analysis comparing the Biden and Trump plans, including Mr. Trump’s stealth increases and other promised tax and expenditure changes. Mr. Biden’s plan wins by an enormous margin: 7.4 million more jobs and a much quicker recovery from this recession. That means higher wages and incomes for most Americans.

Elections matter. Elections gave Republicans the power to enact these tax shenanigans. Neither conscience nor principles stopped them.

The problem now is that unless the Democrats win a majority in the House and the Senate and clinch the presidency, these Republican tax increases, already legislated, are likely to go into effect. The increases, unfairly aimed at the vast majority of Americans who are disproportionately suffering in the pandemic, will cause even more hardship.

They must be stopped.

Joseph E. Stiglitz (@JosephEStiglitz), a university professor at Columbia University, is a 2001 recipient of the Nobel in economic science, chief economist of the Roosevelt Institute and the author of “People, Power, and Profits: Progressive Capitalism for an Age of Discontent.”

House Lays Out Case Against Trump, Branding Him the ‘Inciter in Chief’

Sweethearts Candies Are Back After a Rough Restart, and They Sing