Networks Pledge Caution for an Election Night Like No Other 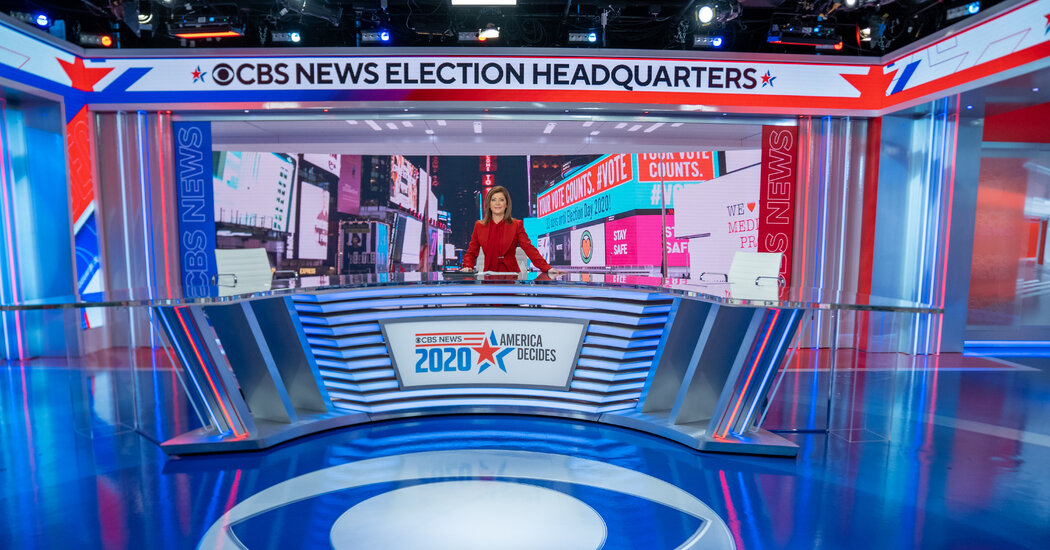 Complicated ballot counts and a president’s baseless claims of vote-rigging are two of the challenges facing TV anchors and executives.

CBS News, whose election coverage will be anchored by Norah O’Donnell, and other networks said they would stress to viewers that results might not be known Tuesday night.Credit…CBS

Batches of ballots that will be counted at different times, depending on the swing state. Twitter gadflies and foreign agents intent on sowing confusion. A president who has telegraphed for months that he may not accept results he deems unfavorable.

Television executives overseeing this year’s election night broadcasts are facing big challenges. And the world will be watching.

“Frankly, the well-being of the country depends on us being cautious, disciplined and unassailably correct,” said Noah Oppenheim, the NBC News president. “We are committed to getting this right.”

In interviews, the men and women in charge of network news coverage — the platform that tens of millions of Americans will turn to on Tuesday to make sense of a confusing vote count and learn the future of their country — made similar pledges.

Patience. Caution. And constant reassurance to viewers about the integrity of the results. “We have to be incredibly transparent all through the night with what we know and what we don’t know,” said George Stephanopoulos, who will anchor the proceedings for ABC News.

To accommodate the idiosyncrasies of this pandemic-era campaign, networks are planning tweaks to the way some election nights looked in the past.

Real-time results will be displayed in the context of the total expected vote, including the absentee and mail-in ballots that will account for a high proportion of it. The usual metric, “precincts reporting,” is tied to in-person votes on Election Day, which producers expect to be potentially misleading.

The “decision desks,” the teams of data experts at news organizations who project results, say they are not competing over who calls a race first. “We’re preparing the audience that this might not be over in one night,” said Susan Zirinsky, the president of CBS News.

And combating misinformation — be it from online mischief-makers or falsehoods from the commander in chief — is a priority, particularly in educating Americans that any delays in declaring a victor stem from care, not chicanery.

“Just because a count may take longer does not mean that something is necessarily wrong,” said Sam Feist, CNN’s Washington bureau chief. “It may not even mean that it’s a close race. We have to constantly remind the viewer that patience will be needed and this may take some time in critical states, and that doesn’t mean anything is untoward.”

That TV networks bear this burden is partly a symptom of the country’s broken information culture, in which partisan news sources and specious social media rumors can overwhelm careful journalism.

There is also open concern among Democrats that President Trump may seize on early returns and declare himself the victor, hoping that voters’ perceptions overwhelm reality.

“I don’t think we can censor the candidates,” Mr. Stephanopoulos said. “But we have to be vigilant about putting whatever comments are made in context, with everything we know about where the race stands, where the law stands, where the votes are.”

Fox News, home to several of Mr. Trump’s most loyal media allies, will receive particular scrutiny. The network’s election telecast will be led by the anchors Bret Baier and Martha MacCallum, although pro-Trump opinion stars like Sean Hannity and Laura Ingraham are likely to pop in occasionally, said Jay Wallace, the president of Fox News Media, who oversees news coverage.

Asked if he would put Mr. Trump on the air if the president dialed into the Fox control room on election night, Mr. Wallace said: “Honestly, we’d have to see what was going on.” But he called that scenario “unlikely,” in part because Mr. Trump’s preferred opinion hosts won’t be guiding the broadcast.

“I wouldn’t think he would call in, knowing that the squad is on that is on,” Mr. Wallace said. He added, “Whatever he were to say wouldn’t sway anything when it comes to what we’re counting.”

Here’s a guide to The Times’s election night coverage, no matter when, how or how often you want to consume it.

That was a reference to Fox News’s decision desk, which has a track record of independence and accuracy. Arnon Mishkin, the consultant who leads the operation, is known for holding his ground during an on-air confrontation in 2012 when the Republican strategist Karl Rove questioned his projection that Barack Obama would be re-elected. Mr. Mishkin, like vote counters at rival networks, will be sequestered from the anchor team on election night, an effort that news organizations say shields the decision desk from competitive pressures.

Two years before he moderated a presidential debate this fall, Chris Wallace had a vivid reaction when Fox News was the first network to project Democratic control of the House.Credit…Ruth Fremson/The New York Times

In 2018, Fox News was 50 minutes ahead of any other network in projecting that the Democrats would take control of the House of Representatives. (“I know a lot of listeners out there, their heads are exploding,” the anchor Chris Wallace told viewers.)

Each television network makes its own state-by-state projections. But the projections rely on raw voting data from a handful of shared sources.

One group of networks — ABC, CBS, CNN and NBC — collaborate on an exit-polling operation, administered by Edison Research. The Associated Press, which has an expansive vote-tracking effort, conducts its own count. Fox News, starting in 2018, relies on a proprietary model that draws from The A.P.

Besides the “magic wall” maps and flag-strewn graphics, the networks will trot out a few gizmos to keep viewers tuned in over what could be a long night — or week, or month. CBS News, for instance, is broadcasting from a recently built set overlooking Times Square, in the studio that housed MTV’s “Total Request Live.”

A poll by Gallup and the Knight Foundation found that more than half of Americans thought it could take a week or longer to determine the results (although Mr. Trump declared on Twitter on Friday, “The Election should END on November 3rd”). Three-quarters of those surveyed said they expected some news outlets to “rush to announce a winner.”

Mr. Oppenheim, of NBC News, said he was keenly aware of his responsibilities. “It’s possible we will have a clear outcome on election night at a reasonable hour, and I don’t want the audience to be suspicious of that,” he said. “It’s possible we won’t have an outcome for several days, or several weeks.”

In 2000, when networks twice erroneously declared a winner in Florida, Mr. Oppenheim was working as a production assistant at MSNBC. “Those of us who have grown up in the last 20 years of television journalism understand that election nights can take any number of surprising directions,” he said. “Our job is to be prepared for all of them.”

Trump, Venezuela and the Tug-of-War Over a Strongman

Vehicles flying Trump flags try to force a Biden-Harris campaign bus off a highway in Texas.