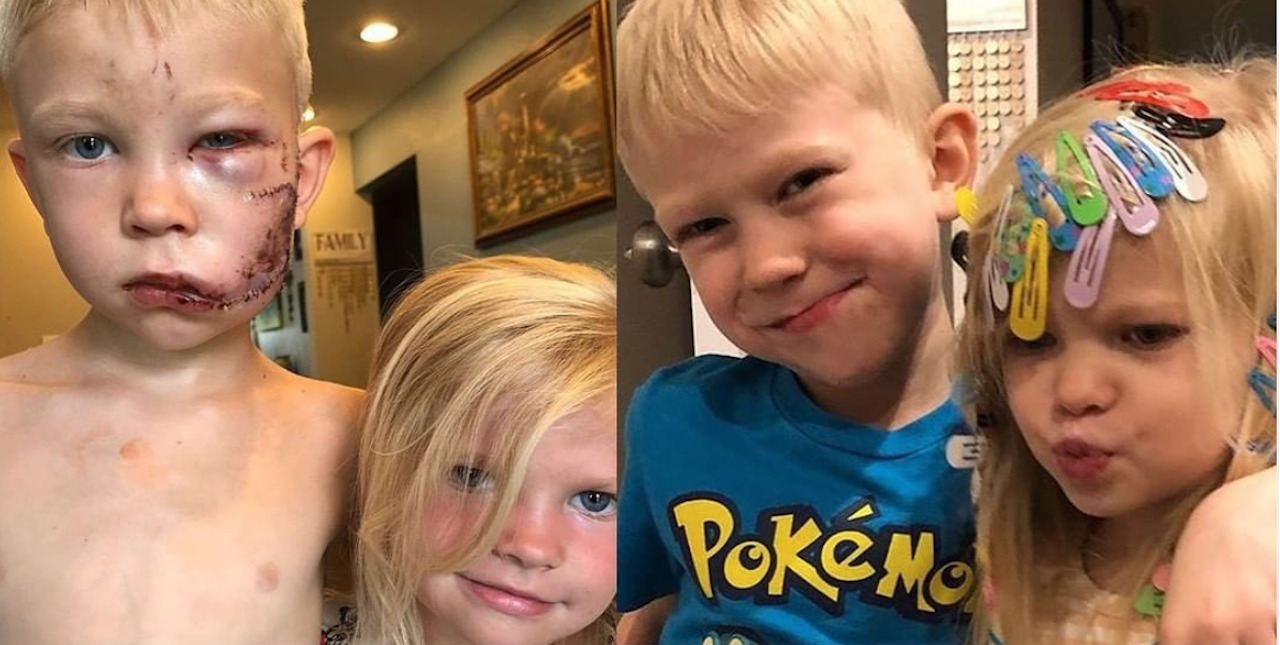 Before he shielded his little sister from the charging dog, before actor Chris Evans called him a hero and scores of strangers learned his name, 6-year-old Bridger Walker took it upon himself to be a model big brother.

When she was first born, he held her and just beamed, pointing to his chest when relatives asked for a turn. He didn’t want to give her up.

It’s why his act of heroism during a dog attack earlier this month came as no surprise to his parents, who recounted the July 9 incident on social media. Bridger, they said, stepped in front of his 4-year-old sister when a German Shepherd-mix barreled toward them.

“If someone had to die, I thought it should be me,” he told his dad.

Bridger’s aunt posted the story shortly after he got home from the hospital, saying Bridger had taken the brunt of the dog’s attack and yelled for his sister to run.

“I know it’s a long shot,” she wrote, “but I’m reaching out to the Avengers and other heroes so that they can learn about this latest addition to their ranks.”

My nephew is a hero who saved his little sister from an attacking dog. He, himself, took on the attack so that the dog wouldn’t get his sister. He later said, “If someone was going to die, I thought it should be me.” He got home from the hospital last night. I know it’s a long shot, but I’m reaching out to the Avengers and other heroes so that they can learn about this latest addition to their ranks. Please, check your DM’s for my sweet nephew’s story. @tomholland2013 @chrishemsworth @robertdowneyjr @markruffalo @prattprattpratt @twhiddleston @chadwickboseman @vindiesel @chrisevans @vancityreynolds @thehughjackman Edit: I never expected my sweet nephew’s story to reach so many. Please, follow my other post (I only have two so far ) for the latest info regarding my sweet nephew and his family.

It didn’t take long for Bridger’s story to go viral, after actress Anne Hathaway spotlighted the Wyoming boy’s bravery and attracted more than one million likes.

“I’m not an Avenger, but I know a superhero when I see one,” Hathaway wrote.

I’m not an Avenger, but I know a superhero when I see one. I can only hope I’m half as brave in my life as you are in yours, Bridger. Wishing you an easeful recovery, and many cool looking rocks. ⁣ ⁣ Hey @markruffalo, do you need a teammate?? ⁣ ⁣⁣ Via @blackculturenews_ & @nicolenoelwalker

Nikki Walker, Bridger’s aunt, has recorded for Instagram the boy’s starstruck reactions to the many personal messages sent by his Hollywood idols.

Iron Man actor Robert Downey Jr. made a video for the boy, and called him “a rock star” and promised “something special” for his next birthday, joking that it would better than any of the other celebrity gifts.

RELATED: Robert Downey Jr. is Creating a Foundation That Will Use Robots to Clean Up the Environment

Fellow Avenger Chris Pratt, from Guardians of the Galaxy, has also chimed in, praising the big brother’s action as “true courage.”

In a video call with the family, Tom Holland invited Bridger to visit the set of his upcoming Spiderman 3 movie.

And the gifts kept coming—like a guitar from musician Bret Michaels and rock specimens mailed to the family because Bridger loves geology. One of his aunt’s photos shows the 6-year-old grinning as he grips a hefty World Champion belt sent by the World Boxing Council after the organization declared him “The bravest man on Earth.”

Perhaps most heartwarming of all, though, was Chris Evans declaring that he was sending an authentic Captain America shield. As Bridger watched the video, he donned his own Captain America costume—with the blue mask partly covered the whorl of 90-plus stitches curving across his cheek.

There are no words. We are so, so thankful.

“Pal, you’re a hero,” Evans told him. “What you did was so brave, so selfless. Your sister is so lucky to have you as a big brother.”

The recovering lad smiled as he soaked in the Avenger’s praise, his little sister at his side.

MORE: Avengers Knock at the Front Door to Surprise a Teen Fighting Cancer

His aunt summed up the whirlwind of attention, writing on Instagram, “This week has reminded us in a massive way that the goodness in humanity far outweighs the bad.”

“If the love you have extended towards us were extended to all, the world would certainly be a brighter place.”

BE A Superhero: SPREAD This Loving Story to Friends on Social Media…

Matthew McConaughey Serves Barbecue to Firefighters in Los Angeles ‘With Thanks’