On Afghan Highways, Even the Police Fear the Taliban’s Toll Collectors 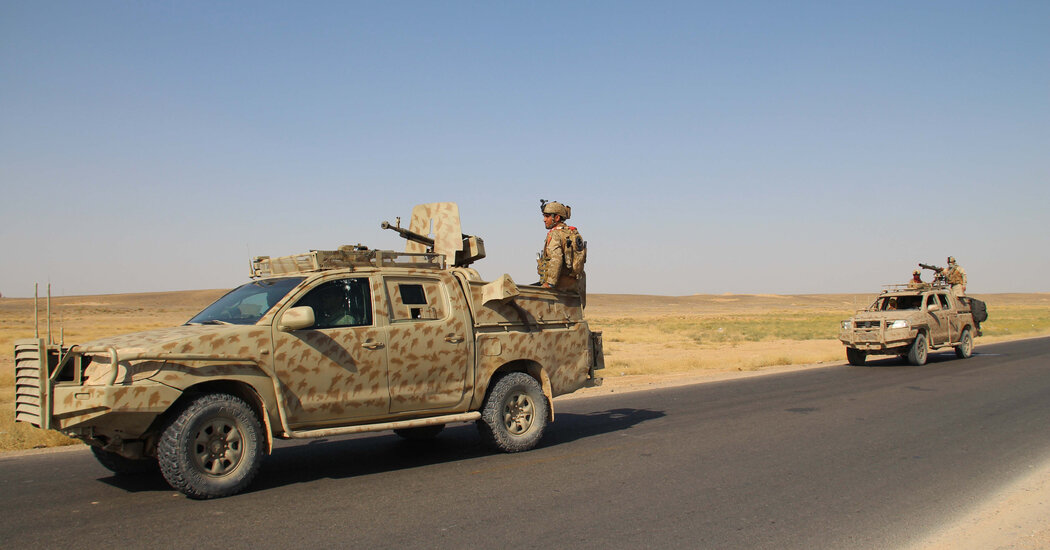 As the U.S. retreats and peace talks stall, the Taliban have increasingly taken over Afghanistan’s highways, raising millions in unofficial taxes and strengthening their negotiating position.

Afghan security officials patrolling a highway linking the provinces Helmand and Kandahar. The Taliban now control more of Afghanistan’s highways than at any time since the United States began drawing down forces nearly a decade ago. Credit…Watan Yar/EPA, via Shutterstock

KABUL, Afghanistan — When the long-haul trucker drives past this hilltop police outpost in southern Afghanistan each week, he knows exactly what to do. The officers toss down a box tied to a length of rope and like all drivers, the trucker places 5,000 afghanis — about $65 — in the box, which the officers then reel back up to their outpost.

The officers don’t dare collect such bribes in person, said the trucker Dawlat Khan, “because the highway is controlled by the Taliban and the police are afraid to come out.”

Since the United States signed a troop withdrawal agreement in February with the Taliban, the militants have established new checkpoints along major highways, seizing control of long stretches of roadways, extorting millions of dollars a month from truckers and travelers and even displacing the police’s own efforts to extort bribes.

Truckers and bus drivers say government forces have remained inside their bases, all but handing over control of many roadways to Taliban fighters. The drivers say in addition to collecting “taxes,” the militants search vehicles for soldiers or government employees, sometimes executing them on the spot.

The lucrative highway racket helps fund the Taliban’s war effort, but there is also a strategic purpose: The militants use their control of many highways to launch attacks on beleaguered government forces, bolstering their negotiating position at the stalled peace talks in Doha, Qatar.

The Taliban takeover of sections of the country’s roadways is shifting the dynamic of the war, now in its nineteenth year, by making it more difficult for the government to resupply increasingly isolated garrisons and checkpoints. Truckers and local government officials say the militants now control more stretches of highway than at any time since the United States and NATO first began drawing down forces nearly a decade ago.

At the same time, the extortion of ordinary Afghans reinforces widespread resentment of a government unable to protect its population. By bolstering the Taliban’s so-called shadow government, the sophisticated highway tax scheme is a precursor to what the militants hope is a future Taliban government.

In the process, the Taliban have cut in on the lucrative bribery system long imposed on drivers by the police. The militants even issue stamped receipts as proof of “tax” payment — documents accepted at Taliban checkpoints anywhere in Afghanistan, drivers say.

“The Taliban principle is: Once you pay the tax, your receipt works all over the country and you won’t be asked to pay the tax again,” said Ahmad Sayid Azimyan, deputy head of the chamber of commerce in Herat Province. Police officers, on the other hand, do not issue receipts for the bribes they extort.

Image The Mahipar Pass near the Pakistani border in 2012. Drivers carrying goods across the borders say both the government and the Taliban expect bribes.  Credit…Mauricio Lima for The New York Times

On stretches of the strategically important Kabul to Herat highway, which traverses much of the country, the Taliban earn between $155,000 to $195,000 a day in such taxes, Mr. Azimyan said.

Abdul Yaqin Ahadi, a district governor in the province of Samangan, said the taxes there fund insurgent attacks across northern Afghanistan. In his region alone, he said, the Taliban earn about $26,000 a day from taxes levied on hundreds of trucks hauling coal from a local mine.

Tariq Arian, spokesman for the Interior Ministry, which oversees the police, said the Taliban presence on highways was “scattered” and “not sustainable.” He said the government “has the upper hand in controlling highways,” and any police officers caught demanding bribes were punished.

But drivers and even local government officials paint a different picture. The government, they say, has ceded control of large stretches of roads and opened the door to the Taliban to commit highway robbery. The militants exact onerous penalties for truckers who evade checkpoints. If a driver is caught without a Taliban tax receipt, his truck is likely to be stolen or burned, drivers said.

“No one dares trying to escape from the Taliban without paying the tax,” said Zia-ul-Haq Ziaee, who owns a building materials company in Kunduz Province in northern Afghanistan.

In Baghlan Province in northern Afghanistan, the militants operate a checkpoint that collects customs fees of $400 to $660 per truck on goods imported from Central Asian countries. Those fees are taken after truckers already paid government duties at the official customs office at the border.

A soldier inspecting a traveler at a highway checkpoint between Ghazni and Kabul in 2018. Government forces, unlike the Taliban militants, don’t issue receipts for the bribes they extort. Credit…Mohammad Ismail/Reuters

The Taliban can earn $200,000 a day in such fees, said Nasir Ahmad Qasimi, chairman of the Balkh Chamber of Commerce. He said the double taxation has driven up the price of commercial and consumer goods, including gas, oil, construction materials, flour and produce.

“Previously, the Taliban didn’t appear on the road to collect customs because they feared the security forces,” said Mr. Ziaee, the construction company owner. “Now they’re right out on the road, collecting customs.”

Many drivers said highways controlled by the Taliban are largely free of crime because the militants do not allow bandits to operate in their territory. But the police and soldiers are so afraid to leave their garrisons and outposts that thieves often rob drivers and passengers in many government-controlled areas.

“Any part of the highway under government control, there are a lot of robberies,” said Mohammad Khalid, who has driven a bus the past eight years between Kabul and Herat. “There are no robberies in Taliban areas.”

The militants have also interceded when the police attempt to extort bribes too close to Taliban areas. Samir Khan, a fuel-tanker driver on the Kabul-Herat highway, said he recently watched Taliban fighters attack two police officers who demanded a bribe from a trucker.

“The Taliban killed one of the police and the other one escaped,” he said.

Amir Mohammad, who drives minivans between the provinces of Herat and Ghor in northwestern Afghanistan, said navigating that roadway had never been so perilous during the four years he has driven the highway.

“There’s the Taliban, there are robberies, there are illegal armed men — everyone is trying to get money from us,” he said.

The Taliban had for years set up temporary roadblocks, only to flee when attacked by government or American forces. But now, drivers say, the checkpoints have become all but permanent, raising millions of dollars from cargo trucks, fuel tankers, minibuses and taxis.

A bridge destroyed by Taliban fighters on the ring road highway, somewhere between Kandahar and Jaldak, in February.Credit…Kiana Hayeri for The New York Times

“Along the whole highway, there is only one outpost of government forces,” Mr. Mohammad said. “There used to be others, but recently they all fell to the Taliban.”

Khan Wali, a resident of Logar Province in eastern Afghanistan, said the Taliban previously blocked the road only once a week. “But now it’s on a daily basis — they have checkpoints and search vehicles and passengers,” he said.

That has left some government outposts in precarious positions and increased the risk of violence along stretches of roadway.

“A police outpost in Zabul Province stops drivers and asks them to bring groceries to the outpost because they have such fear of the Taliban,” said Mohammad Eisa, a bus driver.

A stretch of road in Paktia Province in eastern Afghanistan was for years considered comparatively safe.

“But now the Taliban have set up a checkpoint to search for targeted people, so there are clashes and attacks almost every day,” between the militants and the government forces, said Afsar Khan, a taxi driver. .

Ajmal, a resident of Khost Province in eastern Afghanistan who goes by one name, said government employees had been kidnapped and murdered by the Taliban recently on the highway between Kabul and the city of Khost.

“In the past we traveled this road without any fear, but now we don’t know whether we will reach Kabul or the Taliban will kill us along the road,” Mr. Ajmal said.

Reporting was contributed by Najim Rahim in Kabul, Taimoor Shah in Kandahar, Asadullah Timory in Herat, Zabihullah Ghazi in Jalalabad and Farooq Jan Mangal in Khost.

‘This Is the Last Stop’: Shooting Britain’s Struggle Against Covid

New cell profiling method could speed TB drug discovery: Technology combines rapid imaging and machine learning to uncover patterns in how antibacterials kill; can be applied to many pathogens