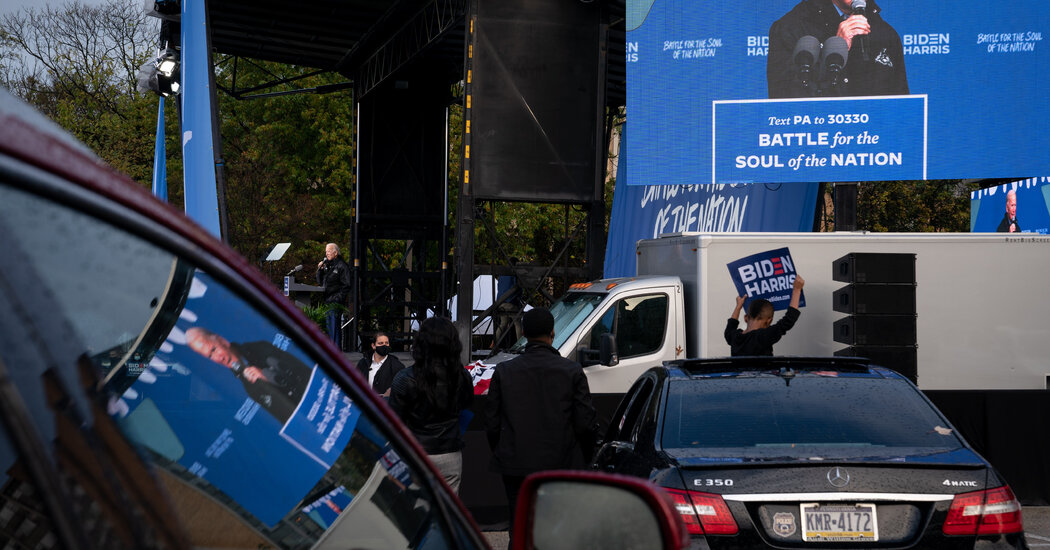 Both campaigns were intensifying their efforts in a state increasingly critical to victory, as the candidates and their surrogates planned a final blitz to make their closing arguments.

PHILADELPHIA — As the national early vote climbs past a staggering 93 million and challenges to the electoral process intensify across states, President Trump and Joseph R. Biden Jr. are barreling into Pennsylvania and turning it into the top battleground in Tuesday’s election, with Democrats flooding in with door-knockers and Republicans trying to parlay Mr. Trump’s rallies into big turnout once again.

​Both campaigns see Pennsylvania as increasingly crucial to victory: Mr. Trump now appears more competitive here than in Michigan and Wisconsin, two other key northern states he hopes to win, and Mr. Biden’s clearest electoral path to the White House runs through the state. Pennsylvania has more Electoral College votes, 20, than any other traditional battleground except Florida, and Mr. Trump won the state by less than one percentage point in 2016.

Mr. Trump devoted Saturday to four rallies across the state, and he and Mr. Biden planned campaign events for the final 48 hours of the race as well, with a wave of prominent Democrats and celebrities slated to arrive. On Monday the president was set to make an appeal to white, working-class voters in Scranton, where Mr. Biden was born, while the Democratic nominee was aiming to solidify a broad coalition of white suburbanites and voters of color on a two-day swing through Philadelphia, Pittsburgh and elsewhere in western Pennsylvania.

Mr. Biden is ahead with a modest margin in recent polls, and is trying to cut into the president’s turnout in rural counties. But Mr. Trump’s rallies have energized many Republican voters, and his team is already preparing legal challenges over the vote if it ends up being close. On Sunday, the president told reporters, “as soon as that election’s over, we’re going in with our lawyers.”

In Pennsylvania in particular, the possibility of extended court battles and confusion hangs over the race, with the state Republican Party hoping the Supreme Court will reconsider its decision last week to allow the state to continue receiving absentee ballots for three days after Election Day.

“Every day is a new reminder of how high the stakes are, how far the other side will go to try to suppress the turnout,” Mr. Biden said as he campaigned here Sunday. “Especially here in Philadelphia. President Trump is terrified of what will happen in Pennsylvania.”

Court battles have already rearranged the voting process across an array of states and continued to do so on Sunday. The Texas Supreme Court denied an effort by Republicans to throw out more than 120,000 votes that had been cast at drive-through locations in Harris County, an increasingly Democratic area anchored in Houston. Republicans are now hoping for a favorable ruling at the federal level, where a judge has called an election-eve hearing for Monday.

Some Trump supporters also turned disruptive on Sunday: Vehicles bearing Trump flags halted traffic on the Garden State Parkway in New Jersey; local officials said the motorcade backed up traffic for several miles. In Georgia, a rally for Democrats that had been scheduled was canceled, with organizers citing worries over what they feared was a “large militia presence” drawn by Mr. Trump’s own event nearby.

Throughout his final sprint of rallies, Mr. Trump has moved to baselessly sow doubt about the integrity of the electoral process. At an appearance in Dubuque, Iowa, on Sunday, Mr. Trump claimed, inaccurately, that the result of the election was always determined on Election Day. “We should know the result of the election on Nov. 3,” he said. “The evening of Nov. 3. That’s the way it’s been and that’s the way it should be. What’s going on in this country?”

Mr. Biden countered with his own warning later Sunday, saying, “The president is not going to steal this election.”

Mr. Trump’s lagging position in the race was evident in his grueling travel schedule that had him shoring up votes in five states he won four years ago — Michigan, Iowa, North Carolina, Georgia and Florida.

His final rally of the day was scheduled for 11 p.m., and risked violating a midnight curfew in Miami-Dade County.

Mr. Biden, by contrast, set his sights squarely on Pennsylvania on Sunday, an approach he will repeat again Monday, along with a foray into Ohio, a state Mr. Trump won handily in 2016 but that polls show could be more competitive now.

The Biden campaign was intensifying its push in Pennsylvania, encouraging supporters from out of state to join canvassing efforts that for months it had sworn off because of the health risks. The campaign said that volunteers had knocked on more than 350,000 doors on Saturday, and made 2 million calls and sent 1.5 million text messages to voters in the state.

Compared with other swing states, such as Florida, far fewer early ballots have already been cast in Pennsylvania and, according to the U.S. Elections Project, as of Sunday there were more than 350,000 absentee ballots that had been requested by Democratic voters that had yet to be returned. The Biden campaign is focused on the fact that a large share of the electorate here is still expected to vote on Election Day, an adviser said.

The final sprint of the race came against a different backdrop than in previous elections, with fewer voters left to motivate. The record number of early votes underscored the intense interest in one of the most consequential elections in modern history, despite the logistical challenges of voting amid a pandemic.

Mr. Biden spent Sunday afternoon with Black voters at a drive-in “Souls to the Polls” event at a Philadelphia church. His outreach came as Democrats have worried about his ability to sufficiently energize and turn out Black and Latino Democratic voters in some states. He addressed another drive-in rally in the city Sunday evening, reminding voters of their influence over the outcome.

Mr. Trump, for his part, made his own pitch to Black voters while campaigning in Hickory, N.C. “To every Black American, I am asking you to vote on Tuesday,” he said, projecting confidence about his own standing with Black voters.

Mr. Biden’s Philadelphia events kicked off a last push through the state over the final two days. On Monday, Mr. Biden, Senator Kamala Harris and their spouses are expected to campaign in five media markets, hoping to cement support across a sprawling coalition and to keep Mr. Trump’s margins down in parts of western Pennsylvania that propelled him to victory in 2016.

“My message is simple,” Mr. Biden said Sunday. “Pennsylvania is critical in this election.”

President Trump at a rally in Dubuque, Iowa, on Sunday. The president’s lagging position in the race was evident in his grueling travel schedule that had him shoring up votes in five states he won four years ago.Credit…Doug Mills/The New York Times

Democrats are well aware of how devoted Mr. Trump’s core base remains. In Macomb County in Michigan, where the president held his first rally Sunday, Irwin Patterson was selling Trump merchandise at a makeshift roadside store.

“In Michigan here, just our little part of Michigan, the support that we see here is just insane,” he said, as windblown snow pelted his customers. “I mean, for the last month and a half, it’s just been off the hook.”

Still, Mr. Trump had work to do all over the country shoring up his support in states he won four years ago. In Michigan, Mr. Trump complained repeatedly about the freezing temperature and biting wind he said was pointed “directly” at his face while making false claims about resuscitating the auto industry there. He also embraced the actions of some of his supporters in Texas who had surrounded a Biden campaign bus with their vehicles on Saturday, in an apparent attempt to slow it down and run it off the road. Mr. Trump claimed the vehicles were “protecting his bus, yesterday, because they are nice.”

Later, he tweeted in response to the news that the F.B.I. was investigating the incident that “in my opinion, these patriots did nothing wrong,” adding that federal authorities should be scrutinizing antifa instead.

Supporters of Mr. Trump in Sugar Land, Texas, on Sunday. The Texas Supreme Court denied an effort by Republicans to throw out more than 120,000 votes that had been cast at drive-through locations in Harris County.Credit…Ryan Christopher Jones for The New York Times

Of the three big Northern swing states Mr. Trump won by a hair four years ago, the once reliably blue state of Pennsylvania is the one his advisers believe is most likely within his reach. That’s in large part because of the support of rural voters and Mr. Biden’s call for eventually phasing out fossil fuels, an unpopular stance for many voters in a state with a large natural gas industry.

Mr. Trump entered the final hours of the race in a worse position here than he was four years ago, when Pennsylvania was seen as Hillary Clinton’s firewall. This time, Mr. Biden has a lead of six points, according to a new New York Times/Siena College poll released Sunday, and is working to create multiple pathways to 270 electoral votes.

That lead, however, isn’t enough to make Democrats and anti-Trump Republicans feel fully confident about the state of the race in Pennsylvania. Some of the president’s opponents in recent days have been worried about turnout in the state’s rural counties, as well as calls about requested ballots that never arrived.

But the Biden campaign has not ceded the subject to the president, with 14 different ads on air that touch on jobs and the economy. Its most aired ad in Pennsylvania over the past week featured a Biden speech outlining his plans for pandemic recovery, including jobs. Another ad directly rebuts the Trump campaign’s attacks on his tax plan.

Pennsylvania’s economy is emerging from the pandemic recession but still has a long road ahead to its pre-crisis state. Like the nation, it has seen a two-track recovery that has left small businesses and low-earning workers behind.

Pennsylvania has long loomed large in the psyche of the Biden campaign. Mr. Biden was born in Scranton, he gave his first speech of his presidential campaign in Pittsburgh, and he chose Philadelphia for his campaign headquarters, before the pandemic hit.Credit…Ruth Fremson/The New York Times

Pennsylvania saw its unemployment rate fall to 8.1 percent in September, according to the Labor Department, nearly identical to the national rate of 7.9 percent. That is a significant improvement from the 16.1 percent unemployment it posted in April. But the state still had 380,000 fewer jobs in September than it did in September of 2019, and there are 18 percent fewer small businesses open here compared to a year ago, according to data compiled by the economists at Opportunity Insights.

Pennsylvania has long loomed large in the psyche of the Biden campaign. Mr. Biden, a Scranton native, gave his first speech of his presidential campaign in Pittsburgh, and he chose Philadelphia for his campaign headquarters, before the pandemic hit.

“That blue wall has to be re-established,” Mr. Biden said in another recent Pennsylvania campaign appearance. He said that winning the state meant a “great deal to me, personally as well as politically.”

Teaching in the Pandemic: ‘This Is Not Sustainable’