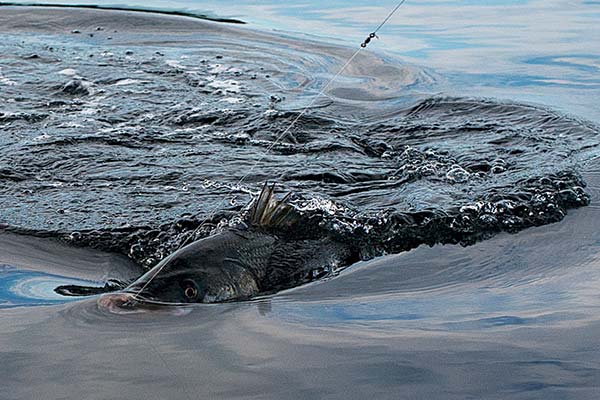 On The Water publisher Chris Megan and I often laugh about how, when I’m standing on shore, trying to cast as far out as I can, he’s in his boat trying to get his plug or eel as close to the shoreline as possible. From there, we go on to joke about who’s going to cast what at whom, should we ever cross paths while fishing along the coast.

I’ve fished with Chris, and I’m continually impressed by just how close to shore he’s catching fish. On more than one occasion, I’ve seen eels cast onto dry land get eaten by stripers almost as soon as the bait is pulled into the surf. Some of Chris’ best fish hit close enough to shore that, had I been fishing on land, I could have reached them simply by dangling the eel off the end of a 10-foot surf rod.

Of course, had I really been on land on those nights, I would have waded up to my waist to cast into the water where Chris drives his boat. Making up for my lack of boat (the surfcaster’s Napoleon Complex?), I often try to get my lure or bait as far into the ocean as possible by way of wading, wetsuiting, and distance-casting rods.

Stripers move into very shallow water to feed. It is very easy to forget this when the deeper water seems so much more appealing. One night, a northeast wind had put a good chop on the water and a distant sandbar had some beautiful whitewater washing over it, exactly the kind of water where stripers like to feed. A friend of mine had beaten me to the beach and was standing in knee-deep water, well out of range of the sandbar. I proceeded to say hello and trudge right past him, figuring he’d been waiting for me to join him before wading farther into the rough surf. As I passed, he shouted, “Jimmy! Stop! The fish are right there!”

My friend, being a more patient and methodical fishermen than I am, had made a few casts in the close-to-shore waters and discovered a school of big fish sitting there. On my first cast into the super-shallow water, a 33-pounder latched onto my needlefish, and over the next hour, a few more big fish hit the sand. It ended up being one of the most memorable nights of our fall, and we never waded farther than knee deep.

Covering the close water is easy. Before plunging in and casting for the horizon, make a few short casts before getting your boots wet. Do this when fishing sandy beaches, rocky shorelines and marshy backwaters. Do it in calm water, rough water, on dark nights and bright days. Stripers are not shy about moving very shallow to feed, especially in the fall when schools of baitfish are swimming tight to the shoreline for cover.

For fishing these close waters, floating or slow-sinking plugs work best. Diving lures like darters, bottle plugs and some deeper-running minnow plugs will dig into the bottom in very shallow water. My favorites are needlefish, shallow-diving minnow plugs like Cotton Cordell Red Fins, a Mambo Minnow with the lip broken off, and Danny plugs. Adding a teaser is also a good idea since casting distance isn’t an issue and because shallow stripers often feed on smaller baitfish. Eels cast close in will also work, especially on sandy or cobbly beaches where the eel can’t swim into a snag and hide.

Stripers won’t always be in the skinny water right next to shore, and more often than not, you’ll find the best fishing in deeper water within casting range, like a hole or trough or cut between sandbars. However, it doesn’t cost you anything to make a few casts in close before wading farther out—your biggest striper of the year could be swimming right at your feet.

Determining Where Bluefin Tuna Come From | Focus on Fisheries