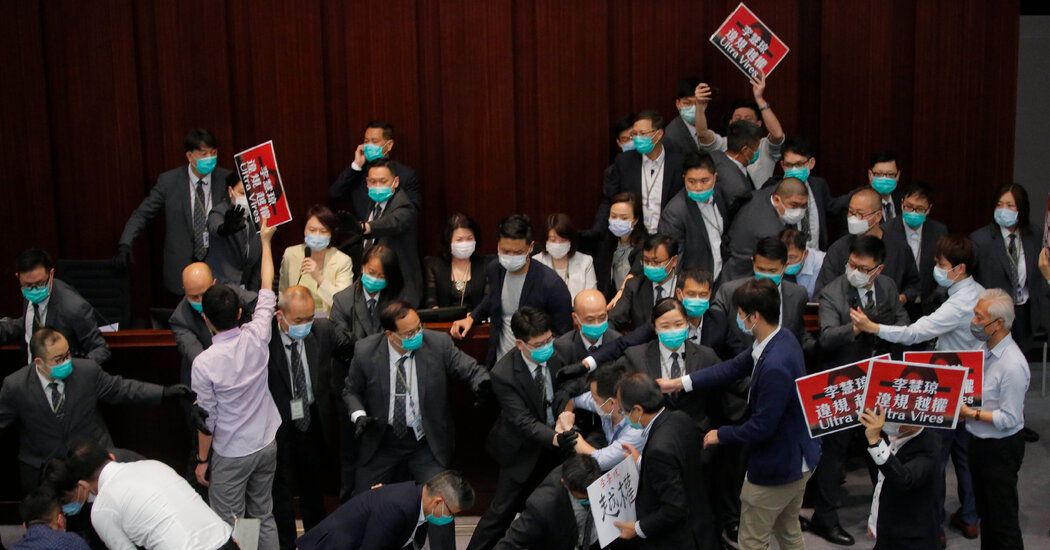 The Hong Kong politicians were arrested in connection with a contentious meeting in May, when the local legislature’s chambers were filled with protest over a battle for control over a key committee.

HONG KONG — The police arrested seven pro-democracy politicians early Sunday over a heated meeting in May, when the local legislature’s chambers were filled with protest over a battle for control over a key committee. An eighth was arrested Monday.

The arrests come as the governments in Hong Kong and Beijing have carried out a broad effort to clamp down on dissent after a year of intense protest in the semiautonomous city.

The authorities have made aggressive use of social-distancing rules against protesters, whose numbers have thinned since last year. And a wide-reaching National Security Law imposed on the city by Beijing at the end of June imposes potentially tough penalties for a series of poorly defined offenses such as subversion and collusion.

The politicians arrested Sunday and Monday were involved in heated disputes over the control of a key committee in Hong Kong’s Legislative Council. A pro-democracy lawmaker had for months stalled debate on several key bills, infuriating the establishment camp and drawing condemnation from the government and Beijing’s powerful liaison office in Hong Kong.

Pro-government lawmakers, who hold a majority in the legislature in part because of their domination of seats reserved for industries and other interest groups, occupied the chair of the committee on May 8. That act set off renewed protests in the legislature.

Starry Lee, the establishment lawmaker who took over the committee, expelled several pro-democracy representatives during the turbulent session.

Image At the council meeting in May, the pro-democracy lawmaker Ray Chan was carried away by security officers after scuffles with pro-Beijing legislators.Credit…Anthony Wallace/Agence France-Presse — Getty Images

The pro-democracy lawmakers Wu Chi-wai, Andrew Wan, Helena Wong and Fernando Cheung were all arrested Sunday morning, along with Kwok Wing-kin, the chairman of Hong Kong’s Labour Party, and former lawmakers Eddie Chu and Ray Chan, according to posts on their social media accounts.

The police confirmed the arrests of six men and one woman Sunday who were accused of acts of contempt and interference under the territory’s Legislative Council ordinance. They did not rule out the possibility of arresting more people over the incident. On Monday morning, the pro-democracy lawmaker Ted Hui was also arrested, the Democratic Party of Hong Kong said on its Facebook page.

Mr. Chan had previously opened a private case against Kwok Wai-keung, a pro-establishment lawmaker who dragged him to the ground during the contentious session. Mr. Chan said he initiated the private prosecution, a little used mechanism in Hong Kong law, because he did not believe the authorities would otherwise act against Mr. Kwok.

Since the first arrests were announced on Sunday, the police have faced questions about why no pro-establishment lawmakers were arrested over the fray. The police denied any political motive. “It’s not about social status or political background,” Chan Wing-yu, a police superintendent, said Sunday.

Hong Kong’s legislative council has seen an increasing number of protests by lawmakers in recent years, particularly by members of the opposition camp who rose to prominence through antigovernment protests. Before the city was engulfed by huge street rallies last year to defeat a proposal that would have allowed extraditions to mainland China, the measure was debated in sometimes intense and chaotic sessions in the legislature.

The Hong Kong government postponed a legislative election scheduled for September, citing risks of spreading Covid-19. The pro-democracy camp condemned the move, saying it was a delay tactic meant to stave off an establishment loss. Mr. Chu and Mr. Chan said in September that they would not continue in office because they believed the one-year extension to the legislature breached the law.

The T List: Five Things We Recommend This Week