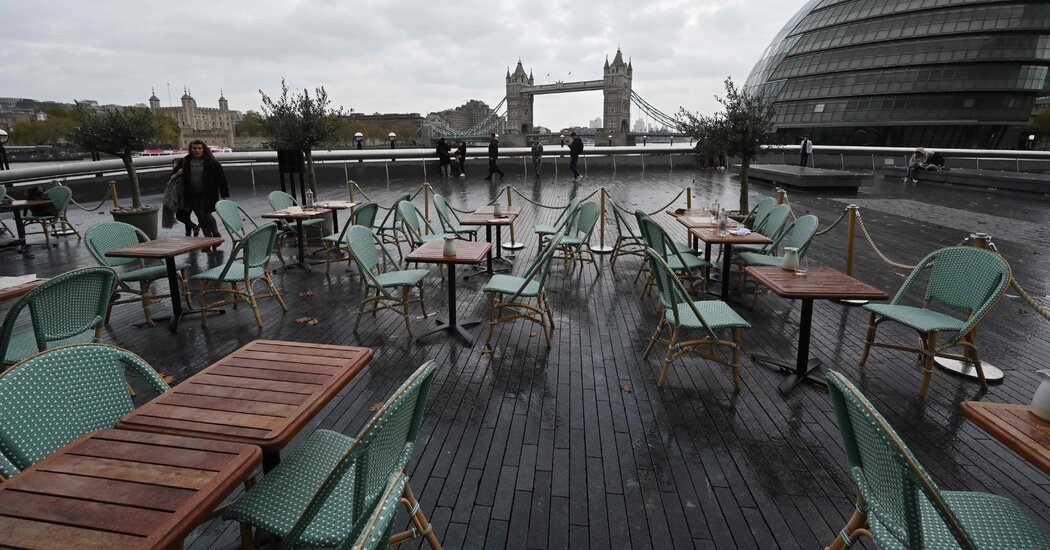 Image Empty tables at a restaurant in London on Sunday, with Tower Bridge in the background.Credit…Justin Tallis/Agence France-Presse — Getty Images

Under the plans, which Parliament is expected to approve, people would be required to stay home unless their workplaces, such as factories or construction sites, need them, and they would be urged not to travel except for business. Schools and colleges would remain open, but nonessential shops would be closed. Pubs and restaurants would be allowed to serve only takeout.

“We’ve got to be humble in the face of nature,” Mr. Johnson said at a hastily called news conference at 10 Downing Street. “In this county, alas, as across much of Europe, the virus is spreading even faster than the reasonable worst-case scenarios of our scientific advisers.”

Restrictions could be extended if coronavirus infection rates do not fall rapidly enough, a cabinet minister warned.

The numbers: Britain has crossed the one million mark for total cases, according to a New York Times database, and its death toll from the virus is 58,925, one of the highest in Europe.

A nearly empty street in Milan last week on the first day the city imposed new restrictions to prevent the spread of the coronavirus.Credit…Alessandro Grassani for The New York Times

Italians are now a long way away from the days of singing on balconies and their summer fling with freedom. Instead, as a second wave of the coronavirus engulfs Europe and prompts new nationwide lockdowns, Italy has become emblematic of the sense of hopelessness now spreading throughout the Continent.

In the first wave of the virus, Italy demonstrated to its neighbors the necessity, and the success, of a national lockdown. It has now become a symbol of Europe’s squandered advantages, the impotence of half measures in the face of an uncompromising virus, and the costs of not making good on promises of relief.

Italians, coming down hard from their summer euphoria, are exasperated. Hospitals, which early in the pandemic delivered a searing global preview of the horror to come, are again under strain and intensive care units are filling up. Across the country, unease is morphing into unrest.

Quote: In March, the Milanese restaurateur Fabiana Gargioli joined the millions singing “The Sky Is Always Bluer” from their balconies. “Now it’s different,” she said. “The money is gone.”

President Trump and Joe Biden, the Democratic presidential nominee, are converging on Pennsylvania, holding a flurry of events in a last-minute quest for votes before Election Day on Tuesday.

The rest of the world is watching. U.S. presidential elections always seize international attention, but this year is exceptional: Mr. Trump has dominated news cycles like few leaders in history. His foreign allies and adversaries alike now await the outcome with anticipation.

Polling favors Mr. Biden, with one showing he holds a clear advantage across the battleground states of Wisconsin, Pennsylvania, Florida and Arizona, bolstered by voters who did not participate in the 2016 election and who now appear to be turning out in large numbers to cast their ballots, mainly for the Democrat. But some of Mr. Trump’s advisers believe there is a wellspring of “hidden” Trump voters unrepresented by the polls.

The Upshot: How the Trump era has strained, and strengthened, politically mixed marriages.

Opinion: What happens if neither candidate concedes? Peaceful transitions of power require political will, the historian Daniel Larsen writes. In the end, people on one side must step back from the brink.

If you have 6 minutes, this is worth it

As the coronavirus sent economies reeling, the wealthiest nations were cushioned by extraordinary credit unleashed by central banks and government spending. Developing countries have yet to receive help on such a scale. Above, women lining up to receive cash aid in Hyderabad, Pakistan, last month.

Our European economics correspondent looked at how the International Monetary Fund and the World Bank have failed to help the developing world weather the pandemic, offering a weak response due in part to the influence of their largest shareholder: the U.S.

Typhoon Goni: The storm made landfall in the Philippines with sustained winds of up to 135 miles an hour and barreled across Luzon, the country’s most populous island, but mostly missed the capital. At least 10 people were killed, while hundreds of thousands have been displaced.

Islam in France: Once denounced by French leaders, the publication of images of the Prophet Muhammad is now defended across the political spectrum as a key expression of free speech, widening a divide with Muslim nations and leaving many French Muslims alienated from their compatriots.

Climate change: Nearly 100,000 inactive oil wells in Canada’s oil patch, which no longer produce oil or natural gas but linger in suspension, put the country’s attempts to reduce its planet-warming carbon emissions at risk. No one knows how many are leaking methane and other pollutants.

Stabbing attack in Canada: The police in Quebec City have arrested a man in his mid-20s who they say was dressed in medieval garb and carrying a sword when he went on a rampage on Halloween night, leaving at least two people dead and five wounded.

Snapshot: Above, rescuers search through the rubble of a collapsed building in Izmir, Turkey, on Sunday. The magnitude 7.0 earthquake that hit Friday has left at least 62 dead and more than 900 others injured.

Lives Lived: Enzo Mari, an irascible industrial designer, artist and polemicist who made simple, beautiful objects that delighted generations of Italians and design buffs all over the world, died from complications of the coronavirus last month at 88 in Milan.

What we’re reading: This Bon Appétit article on a food writer who started a cafe — for a chipmunk (his name is Thelonious). Anna Holland, an editor in London, calls the piece “the infusion of joy so many of us need right now.”

Cook: Like most stews, this hearty beef stew with red onions and ale improves as it sits. Our Food writer, Melissa Clark, says it’s as cozy as her favorite sweater.

Watch: Sean Connery, who died on Saturday at 90, played a man’s man with an earthy sexiness, whether as James Bond or Indiana Jones’s father. These 15 movies illustrate how the actor commanded the screen.

Do: Consider these questions to help you decide whether you would feel comfortable taking a trip during the pandemic.

For something fun and engaging to read, cook, watch and do as the weather turns colder, scroll through our At Home collection of ideas.

When Donald Trump won in 2016 after a majority of polls predicted otherwise, it was the biggest polling miss in a presidential election in decades. Consequently, there is uncertainty around this year’s polling averages showing former Vice President Joe Biden ahead of Mr. Trump.

In reality, the polls in 2016 by some measures were better than those in 2012: Many national polls fared well. The final Times/CBS News survey had Hillary Clinton ahead by three points nationwide, less than a percentage point from her final popular vote margin.

One of the major reasons state polls favored Mrs. Clinton was that they didn’t typically adjust their samples by education. This year, for the first time, Monmouth University — a high-profile pollster — is weighting education. But many state polls still don’t.

The Times’s polling expert, Nate Cohn, found our polls to be top-notch, not least because their starting point is a list of every registered voter in the region, greatly increasing the odds that the right number of Democrats and Republicans are interviewed. The Times/Siena polling received one of the few A-plus ratings by the analytical website FiveThirtyEight.

When The Times calculates polling averages, it takes into account the shortcomings of some polls and adjusts accordingly, such as weighting by quality and sample size.

Not every poll is perfect, but pollsters have made strides in learning from 2016, and given Mr. Biden’s lead, the state polls would have to be less accurate than they were in 2016 for that advantage to not be borne out in voting, according to Nate. Keep up with the latest updates in the Presidential Polling Diary.

Wishing you a safe start to the week. See you next time.

Thank you
To Theodore Kim and Jahaan Singh for the break from the news. Will Dudding wrote today’s Back Story. You can reach the team at briefing@nytimes.com.

P.S.
• We’re listening to “The Daily.” Our latest episode is on older voters who have switched sides in the U.S. election.
• The word “squiddish” — in an article about the ram’s horn squid — appeared for the first time in The Times yesterday, as noted by the Twitter bot @NYT_first_said.
• Here’s our Mini Crossword, and a clue: Tiny food for the world’s largest animal (Five letters). You can find all our puzzles here.
• The Daily will broadcast live on Tuesday for the first time, to cover the U.S. elections.

13-Year-old ‘Angel’ is Donating Thousands of Masks, Meals, and Clothing to Seattle’s Homeless–WATCH

Novel PFAS comprise 24% of those measured in blood of Wilmington, N.C. residents