Blackfish Bait – On The Water 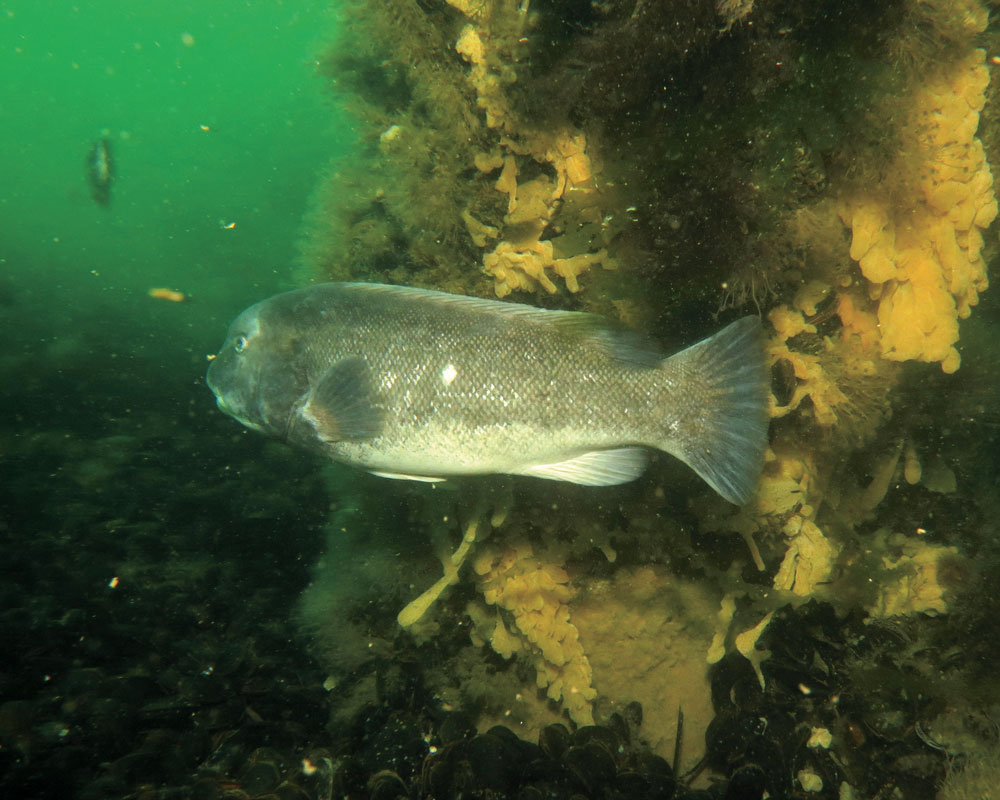 It is the time of year when a t-shirt is no longer a suitable choice to wear on the water and the light-tackle spinning rods have been left on the rack at home. Summer flounder are long gone and the remainder of our gamefish will be departing shortly. However, a “bulldog” of the Labridae family will be moving inshore and become more active as water temps drop.

The family Labridae are commonly referred to as wrasses, and our prized local wrasse is the blackfish. Going by many names such as tautog, tog, and white chin, this bruiser can grow to lengths of 36 inches and weights of 28 pounds. They are long-lived, reaching ages of 35 to 40 years old.

Young-of-year blackfish seek shelter among eelgrass meadows and patches of seaweed in the back bays. During this time, their color is highly variable and can include shades of green, red, and brown, which allows them to better camouflage with their surrounding environment. As they mature, they leave the protection of the sea grasses and search out hard structure like rocks, wrecks, and pilings.

Blackfish are visual predators that remain active during daylight hours and quickly retreat to the shelter of structure as the sun begins to approach the horizon. Once settled in, they will “sleep” until sunrise the next morning. It is because of this behavior that we do not target blackfish at night, as we do other species such as bluefish and striped bass.

Adults and juvenile blackfish feed on an assortment of hard-shelled crustaceans and mollusks. They have large teeth with powerful jaws that can crush through the hardest defenses with ease. A small prey is often swallowed whole, to be “chewed” with pharyngeal teeth located in its throat.

A blackfish’s ability to feed on these crunchy foods enables anglers to use non-standard (at least in the Northeast) baits. Staple baits such as sliced clams and worms work to catch blackfish, but they are easily plucked from a hook by bait stealers. To slow down these thieves, there are many baits an angler can select. 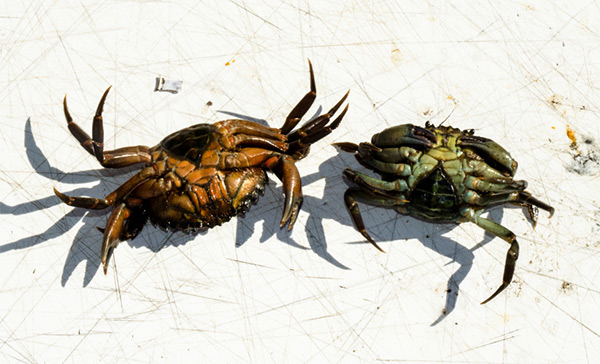 Green crabs are the most common species of crab used as blackfish bait. Extremely abundant, green crabs are an invasive species that showed up from Europe in the mid- to late 1800s. It is believed they were hitchhikers on the bottom of wooden boats. As they spread along the coast, they left a destructive path, feeding on many commercially important species such as scallops, soft-shell clams, and mussels.

Similar in size and shape is the Atlantic rock crab. It is a native species that inhabits the same environment as the green crab and is often referred to as a white crab. Crabbers potting green crabs catch rock crabs as bycatch, and they make excellent blackfish bait.

Another popular bait for blackfish is the hermit crab. Locally, we have two species, the long-clawed and the flat-clawed hermit crab, with the latter being more commonly used as bait. A hermit crab is unique from other crabs because it has a very soft and vulnerable body. To protect itself from predation, it uses an empty snail shell as a mobile home, carrying it everywhere it goes. At the first sign of danger, a hermit crab can pull itself deep inside the shell for protection. As it grows, a hermit crab must find a new, larger home to move into. If an empty shell is not available, the hermit crab will evict another crab from its home, or kill a snail to obtain its shell to move into.

Not all blackfish baits are fully aquatic crabs. The fiddler crab lives in the intertidal area of saltmarshes. A male fiddler crab can easily be distinguished from a female by its one, very large claw. It will wave this oversized claw up and down in a fiddling motion to attract a female. This claw is also used aggressively to defend its burrow from other encroaching males. If this large claw is lost, the male will grow a new one.

In recent years, a new crab has become the hot bait for blackfish, the Asian shore crab. With its introduction to the East Coast in the late 1980s, the Asian shore crab has now established itself from Maine to North Carolina. They can be commonly found living intertidally around hard and rocky bottoms. I have been to areas where turning over one small rock revealed fifty or more crabs hiding beneath it at low tide. It is still early to know what impact these crabs will have on our environment, but as with all invasive species, they can negatively affect the entire food chain.

Now that you are armed with knowledge of blackfish and some of their favorite food items, grab that jacket, a heavier fishing rod, and put some tog in the boat.

Ayurveda drugs can be effective in mild to moderate cases of COVID-19: AIIA