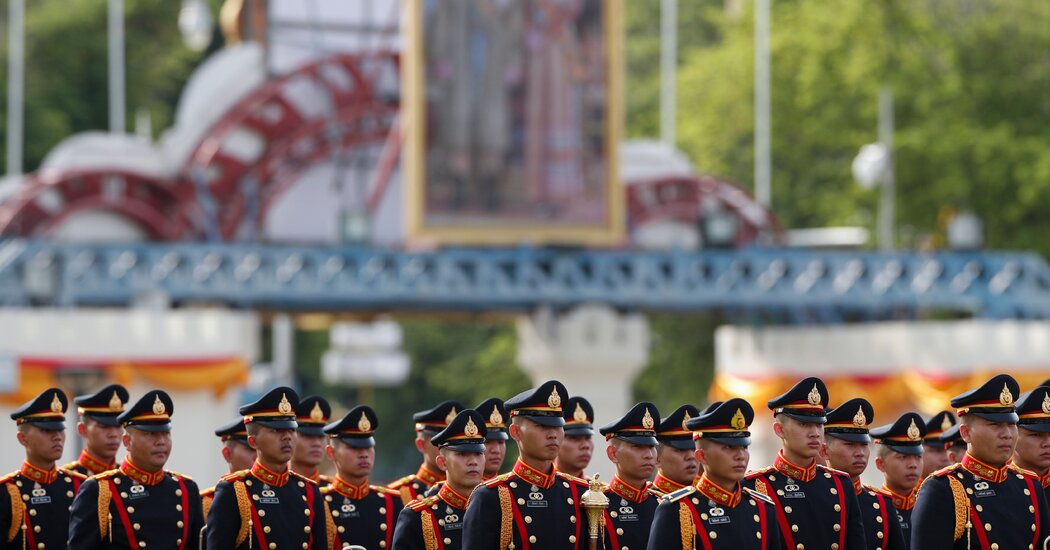 “I see a coup as not a bad thing,” said one prominent royalist who publicly called for a military intervention to quell antigovernment rallies in Bangkok and to protect the monarchy.

A ceremony at the Royal Thai Army headquarters in Bangkok in September.Credit…Rungroj Yongrit/EPA, via Shutterstock

BANGKOK — There are certain constants in Thailand: the drenching monsoons, the grand openings of new shopping malls and the rumors that the Royal Thai Armed Forces are plotting another coup.

For weeks now, student-led protesters across Thailand have taken to the streets every few days, calling for a new constitution with authority over the monarchy, an end to the persecution of the political opposition and the resignation of Prime Minister Prayuth Chan-ocha, the retired general who led the most recent military coup, in 2014.

Some earlier antigovernment movements in Thailand were silenced by gunfire, with dozens killed most recently in 2010. While the security forces have not cracked down violently on these peaceful rallies, it’s unclear how long such restraint will last. Nor is it certain how long the army is willing to stay in the barracks, plotting against Mr. Prayuth, who was once one of their own.

Whenever the generals launch a coup, the refrain is the same: Thailand needs a return to order, without messy rallies or dissenting voices.

“I see a coup as not a bad thing,” said Sondhi Limthongkul, a prominent royalist. As recently as last week, Mr. Sondhi publicly called for yet another military intervention to restore stability and protect the monarchy, urging the military to quickly hand over power after seizing it so the king could oversee the formation of a unity government.

For the protesters, the military’s enduring power in a country that markets itself as a modern democracy is as alarming as it is anachronistic.

The rallies have highlighted the military’s continuing grip on the country, its meddling in politics through coups, and the ways it has profited from a deeply unequal society, securing economic benefits via vast business holdings. Most of all, the young demonstrators chafe at how conscription and other martial traditions are being used to try to create an orderly, obedient populace that hews to the military’s command.

Image Protesters in Bangkok have been rallying for weeks to demand democratic change in Thailand.Credit…Adam Dean for The New York Times

Mr. Prayuth, the prime minister, said on Friday that he could not determine whether “there will be a coup or there won’t be a coup.” But he added, “no one wants to do it, no one wants to stage one.”

Political analysts noted that coup denials have often grown louder as planning for them intensifies. Over the past nine decades, the Thai military has tried to oust elected governments about 30 times. At least a dozen of these putsches have been successful.

“The empire will strike back,” said Paul Chambers, author of the upcoming book “Camouflaged Khakistocracy: Civil-Military Relations in Thailand.” “The military, and all the vested interests that are being threatened by the student protesters, they aren’t going to allow the end of hegemonic military capitalism.”

The Thai military is the country’s largest landowner, apart from the forestry bureau’s national park holdings. It has created a sort of parallel state with its own internal security apparatus that has brought thousands of dissenters to its military bases for enforced “attitude adjustment” sessions. It appoints all 250 members of the Senate.

Military regimentation — uniforms, hierarchies and unquestioning discipline — has become a societal expectation, from schools to parts of the Civil Service. The military has also profited from defense budgets that have increased roughly 140 percent since 2006, the year of yet another coup.

The outsize influence of the Royal Thai Armed Forces stands in contrast to its diminished role on the battlefield. Despite a top brass that includes about 1,600 generals, the second highest in the world per capita, Thai soldiers have not fought in a major engagement on home turf since World War II. Thailand does not face serious external security threats, and a defense alliance with the United States ensures safekeeping by the world’s largest military.

The Thai military has instead fashioned itself as a guardian against internal discord, most of all threats to the nation’s other powerful institution: the monarchy. The last two coups, in 2014 and 2006, were justified as necessary to protect the palace, even though the royal family, one of the richest in the world, can count on a raft of laws designed to shield it from criticism.

For the first time since absolute monarchy was abolished in 1932, King Maha Vajiralongkorn Bodindradebayavarangkun is now facing sustained calls from protesters for his powers to be curbed. Since inheriting the throne in 2016, he has lived most of the time in Germany, with taxpayer money funding his lavish lifestyle. The king is now back in Thailand, attending public events in military uniform.

“The military is the only institution that can sustain the power of the king,” Mr. Chambers said. “And the monarchy gives legitimacy to the military and blesses each of the coups.”

This symbiotic relationship between the military and the monarch was underscored in September when Apirat Kongsompong, the commander in chief of the Royal Thai Army, retired from the military only to be immediately appointed vice chamberlain of the palace’s Royal Household Bureau.

“The royal institution, the military and people are inseparable,” Mr. Apirat said in a speech last year.

The current protest movement began earlier this year when students spoke out against regimented school rules, such as grooming regulations and expectations that they prostrate themselves before their superiors.

The demonstrations also encompassed urban, educated Thais who felt their political aspirations were thwarted when a new party called Future Forward was ordered to dissolve by the Constitutional Court in February, a decision rights groups said was politically motivated. Future Forward had campaigned on slashing the defense budget and ending military conscription. It finished third in the elections last year, a surprisingly strong showing for a neophyte political force.

The commander in chief of the Royal Thai Army, Apirat Kongsompong, retired in September from the military only to be immediately appointed vice chamberlain of the palace’s Royal Household Bureau.Credit…Mladen Antonov/Agence France-Presse — Getty Images

“The real reason for conscription is that they need the personnel so they can control the society,” said Pongsakorn Rodchomphu, a leading member of the Progressive Movement, which replaced Future Forward after its dissolution.

“We need to reform the military to be professional soldiers who don’t have time to do politics,” Mr. Pongsakorn, a retired lieutenant general, added. “This kind of atmosphere in Thailand, where we have to ask the commander in chief, not the politicians, for help, it’s not civilized, it’s not modern.”

The poor treatment of military recruits grabbed headlines in February when an army sergeant opened fire in Thailand, killing nearly 30 people. One of his victims was his commanding officer, whom the soldier had accused of cheating him through a property deal. After the mass shooting, tales poured forth of military superiors pressuring conscripts into shady business transactions or forcing them into deadly hazing rituals.

“My request is that recruits have dignity, to be treated as human beings, not as slaves,” Piyamit Klanarong, a political science student at Chulalongkorn University in Bangkok, said during a protest last month.

The issue of conscription has also underscored the income divide in Thailand, where rich young men can often buy their way out of the required two years of military service. Thailand has one of the largest wealth gaps among major economies.

As it fought insurgencies in the country’s poor north and Deep South, the army acquired lucrative development projects. It is heavily invested in banking and media. The military also runs hotels, housing developments and golf courses. Its management of sporting arenas was exposed earlier this year when a cluster of coronavirus cases came from a boxing event in Bangkok that took place in contravention of lockdown measures.

Military officers, both retired and active, are sprinkled on the boards of private companies and state-owned enterprises. The Air Force has a stake in the development of Thai airports. So does the Navy, which is building a new airport near Bangkok.

“How would Americans react if the U.S. Navy owned a new international airport in a Navy base with duty-free shops?” said Kanda Naknoi, a Thai-born economist at the University of Connecticut. Ms. Kanda’s research shows that the military’s financial holdings increase in the wake of coups.

“The chance of making a coup is zero as long as there are no groups that create a situation or a violent conflict,” he said. He did not specify what would happen if such groups were thought to exist.

Trump Gave W.H.O. a List of Demands. Hours Later, He Walked Away.