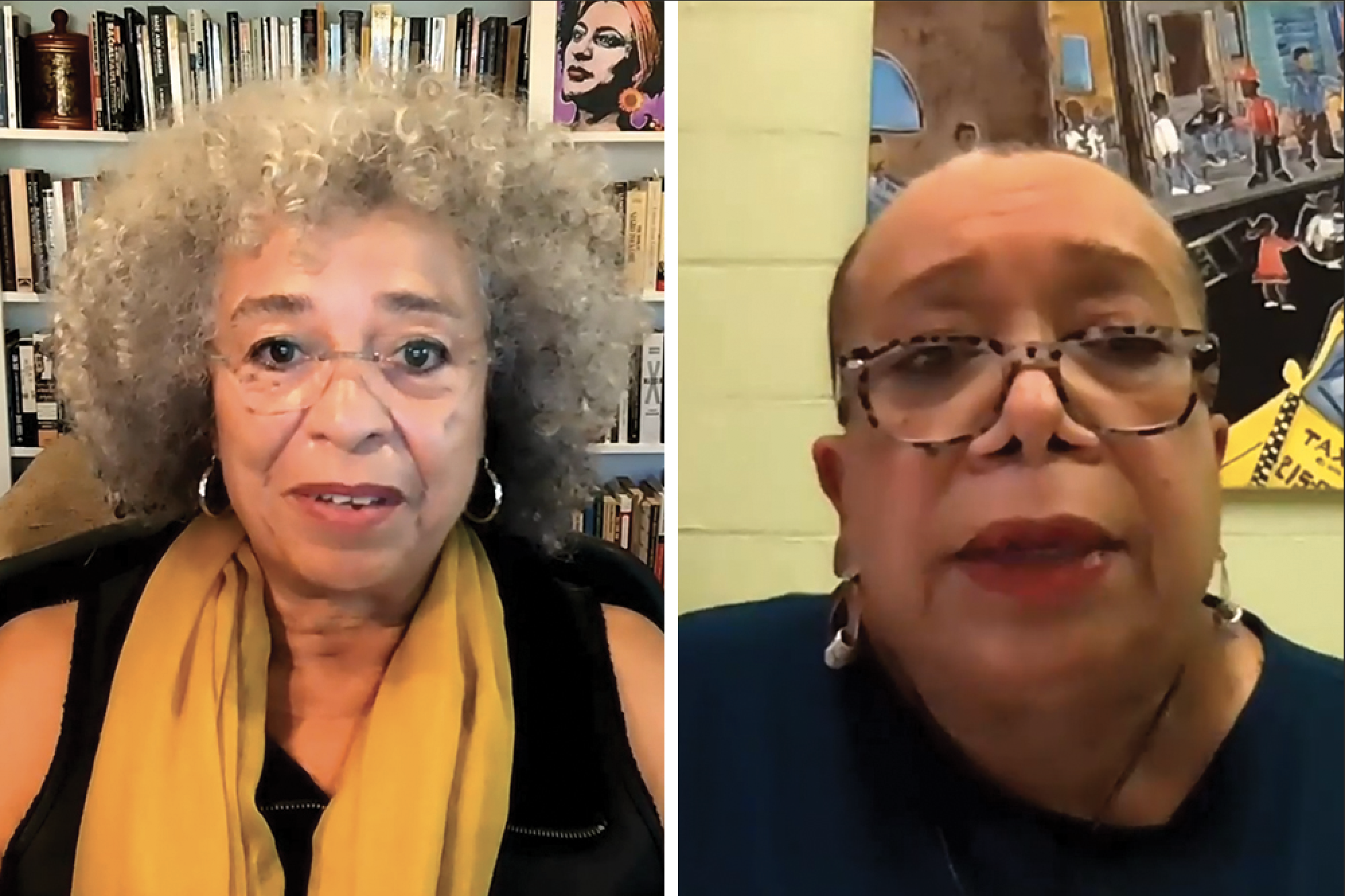 Over 2,000 members of the MIT community tuned in for a live webcast Oct. 21 featuring a Q&A with activist and scholar Angela Y. Davis, whose name, for many, has become synonymous with the struggle for economic, racial, and gender justice.

During the conversation, Davis described the United States today as being in another Reconstruction period akin to that after the Civil War, which, she said, “was not only not completed; it was reversed.”

“We’re doing work now that actually should have happened in the aftermath of the Civil War,” she said.

Throughout the discussion, moderated by MIT Senior Associate Dean for Graduate Education Blanche Staton, Davis emphasized the importance of the many past activists who paved the way for their counterparts today, and who she sees herself as bearing witness for. “The work we did did eventually have a transformative effect, and can allow us to embrace a very different kind of future,” said Davis, a distinguished professor emerita at the University of California at Santa Cruz.

“Hearing Dr. Davis speak about her life and experiences was truly inspiring. One thing that stuck with me was her take on the balance between the urgency that many of us feel to try to make change now and the patience that is often required to see that change through,” said Joseph Maalouf, a chemical engineering graduate student and one of the founders of the student group Diversity in Chemical Engineering (DICE). “I think her most important point was that everyone, no matter where they are, has the opportunity to contribute toward society’s fight for equality. I think this was a particularly important message for the MIT community to hear, and it is something that all of us as researchers and individuals should recognize and act on.”

In response to questions from Staton and audience participants, Davis also gave advice for young activists, talked about activism at research universities, and described how she became an activist in the first place.

Davis grew up in Birmingham, Alabama, “which at the time was the most segregated city in the country,” she said. She was born into a family “that had already embraced activism.” Her mother, for example, was a member and officer of the Southern Negro Youth Congress, and worked with people like civil rights activist and author W. E. B. Du Bois.

“So I don’t think I really had a choice in [becoming an activist],” Davis said. “From the time I was very, very young, my mother and father pointed out that we had to imagine a different world. That the system of absolute racial segregation in the South was wrong.” She also learned from her mother to “think about possibilities of change, and to always be hopeful. Because sometimes that’s all we have: hope. And I see the work of building movements as being that of creating collective hope.”

Davis is always a little reluctant to give advice to younger people because, she said, “I think young people have to have the full experience.” In other words, they have to make mistakes, just like she did. “I think that the mistakes are oftentimes even more important than getting things right the first time because one tends to learn much more from mistakes than one does from events that unfold smoothly.”

She also emphasized that activism can be practiced anywhere. “Whatever one is doing, wherever one happens to be situated, there are possibilities of contributing to struggles for equality and justice.”

Davis further encouraged young activists to think more broadly about racism. “What’s perhaps lacking at this moment is a sense of internationalism,” she said. “It’s not simply confining our way of imagining the movement to local situations, or even national, but rather to think about the global situation. People around the world are working against racist police violence, for example; not just those in the United States. Brazil, which “has the largest population of Black people outside of the continent of Africa,” has a long history of fighting against racial injustice.

Finally, she told her audience not to forget about anti-immigrant racism.

The role of the research university

The training that happens at research universities, whether in the field of the humanities, the arts, or the sciences, “is absolutely essential to change,” Davis noted. She encouraged people at universities like MIT to “recognize that they have a political role to play,” particularly now, “when we have political leadership … that completely discounts science, that assumes that science is about one’s opinion.”

She went on to emphasize that the humanities are just as important as science in the development of “individuals who understand the world in a broad sense; who can not only solve the difficult scientific problems, but will have compassion, and will recognize human rights.”

Inspired by “the mouth of a revolutionary”

“Angela Davis has been an icon of activism and engagement, giving a voice to the powerless and drawing attention to injustice for decades,” said Professor Jeff Grossman, head of the Department of Materials Science and Engineering, “As an individual, I was grateful to have the opportunity to hear her speak, and as a member of the MIT community, I am hopeful that the words she shared will help us make a better world.”

Professor Paula Hammond, head of the Department of Chemical Engineering, added, “[Angela Davis’s] work has left an imprint on me personally, and has impacted all of us here in some way. She has provided a voice for so many, and reminds us of the importance of community when trying to facilitate change. I look forward to continuing our work to foster inclusion and equity in our MIT community and in our world.”

Davis’ talk also had an impact on students. Asia Hypsher, a senior majoring in chemical engineering, shared, “It was powerful to listen to Dr. Davis speak and give historical context to a movement that seems to be moving much too slow. As a young person, it was encouraging to hear from the mouth of a revolutionary the tangible progress she has seen made in the movement for Black liberation and what she is looking forward to in our future. Her insights on the role of universities and of individuals in this movement was invaluable.”

In introducing Davis, Staton described how Davis personally inspired her and other young Black women in the 1960s and 70s “to have confidence that we too, as a collective, could make a difference. … On behalf of the many young Black girls … who were able to find their voices and stand proud because of you, and others like you, we are grateful.”

Hospital Knits ‘Mr. Rogers’ Sweaters for All the Newborns in Honor of World Kindness Day

How to stage a revolution