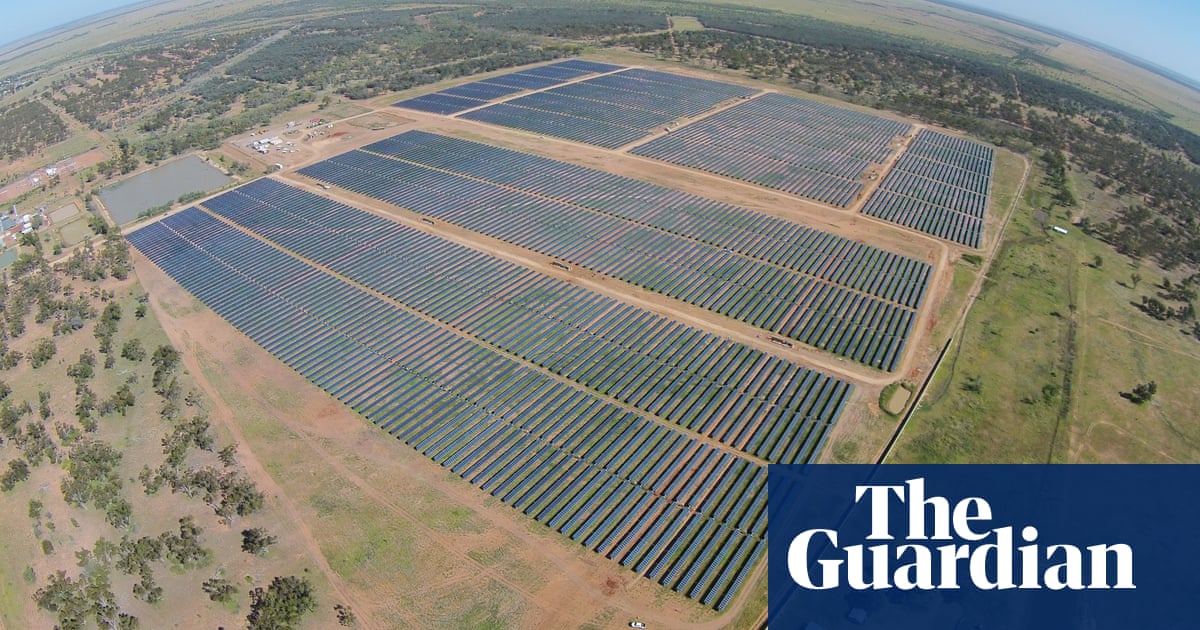 Queensland has the potential to draw all of its electricity from renewable sources in a 15-year transition away from fossil fuels that would generate almost 10,000 jobs, according to analysis commissioned by the Queensland Conservation Council.

Almost 11,000 ongoing jobs would then operate and maintain a suite of energy sources either existing or proposed in the state, including wind and solar and farms, hydro plants and battery projects.

The QCC analysis is timed to energise the state’s election campaign and point candidates and leaders to the huge potential in renewables in the sunshine state.

Queensland’s environment minister, Leeanne Enoch, told an environment forum that a re-elected Palaszczuk government would develop a climate action plan to set out how the state would meet its targets on lowering greenhouse gas emissions up to 2030.

The state government has targets to cut emissions by 30% from 2005 levels by 2030 and have half of the state’s electricity generated from renewables by the same year. The government aims to reach net-zero emissions by 2050.

Guardian Australia has been told by sources familiar with the matter that work on an expected green paper that would have laid out the government’s plans to reach the 2050 target has stopped, and is likely to have been shelved.

Tristan Edis, a renewable energy analyst who was commissioned by QCC to look at existing and planned renewable projects, said the state had “world-class” opportunities in renewables simply because of the amount of sunshine and land available.

“What we see here is that maybe Queenslanders have not been told that they have plenty of potential to generate enough electricity for what they can consume, and then more,” he said. “We really have to start planning out the infrastructure that can support it.”

The QCC climate and energy campaigner Claire Fryer said its plan showed coal power could be replaced with renewables and storage “to give us plenty of electricity, at the right times, in the right place, with stable 24/7 supply”.

Edis examined all the existing, planned and proposed projects across the state, finding a transition to renewables for domestic electricity supply within 15 years would generate 9,400 jobs in construction and almost 11,000 to maintain.

A key step would be increasing investment in electricity transmission infrastructure, he said.

Solar, wind, bioenergy and solar thermal would take up the bulk of the supply, with energy storage provided through batteries, pumped hydro and hydrogen produced from wind or solar power.

Three regions were best positioned to take advantage of a renewables boom, QCC said – Townsville, the dry tropics and the far north; central Queensland and the Mackay-Whitsunday area; and the Darling Downs/Condamine region.

The Queensland government first flagged the development of a green paper in 2017 as part of a climate transition strategy.

A state Treasury report shows it was working with the Department of Environment and Science to develop the green paper, and then a white paper.

The QCC director, Louise Matthiesson, said conservation groups had been consulted on the green paper in 2019.

“After the [2019] general election, we were told the consultation process was on hold and that’s the last thing we heard,” she said. “It seems it was shelved after the federal election.”

Guardian Australia asked Enoch’s office if the green paper had been dropped, but a response did not answer that question.

A statement from the minister said: “A re-elected Palaszczuk Labor Government will deliver a Climate Action Plan 2020-2030 to map out our actions for the next decade.”

The minister said the government had taken strong action on climate change, and pointed to its $500m investment in publicly owned renewables as part of the state’s recovery from the coronavirus pandemic.

“We are already taking strong action on climate change,” the statement said.

Speaking at a forum on Tuesday, Enoch joined the LNP environment spokesman, David Crisafulli, and the Greens MP, Michael Berkman.

Crisafulli said an LNP government would align its emissions reduction targets with the federal government’s goals for the Paris climate agreement.

The Morrison government has refused to back a target of reaching net zero emissions by 2050.

Matthiesson said it was important that Enoch had recommitted to developing a climate action plan, but repeating a promise made in 2017 did not go far enough.

“Whichever party wins government, the next four years will be crucial in whether or not we can meet that interim 2030 target,” she said. “This is an incredibly urgent issue that affects the future of our kids, our economy and our lifestyles.”

Now, NEET exam can be attempted in Hindi