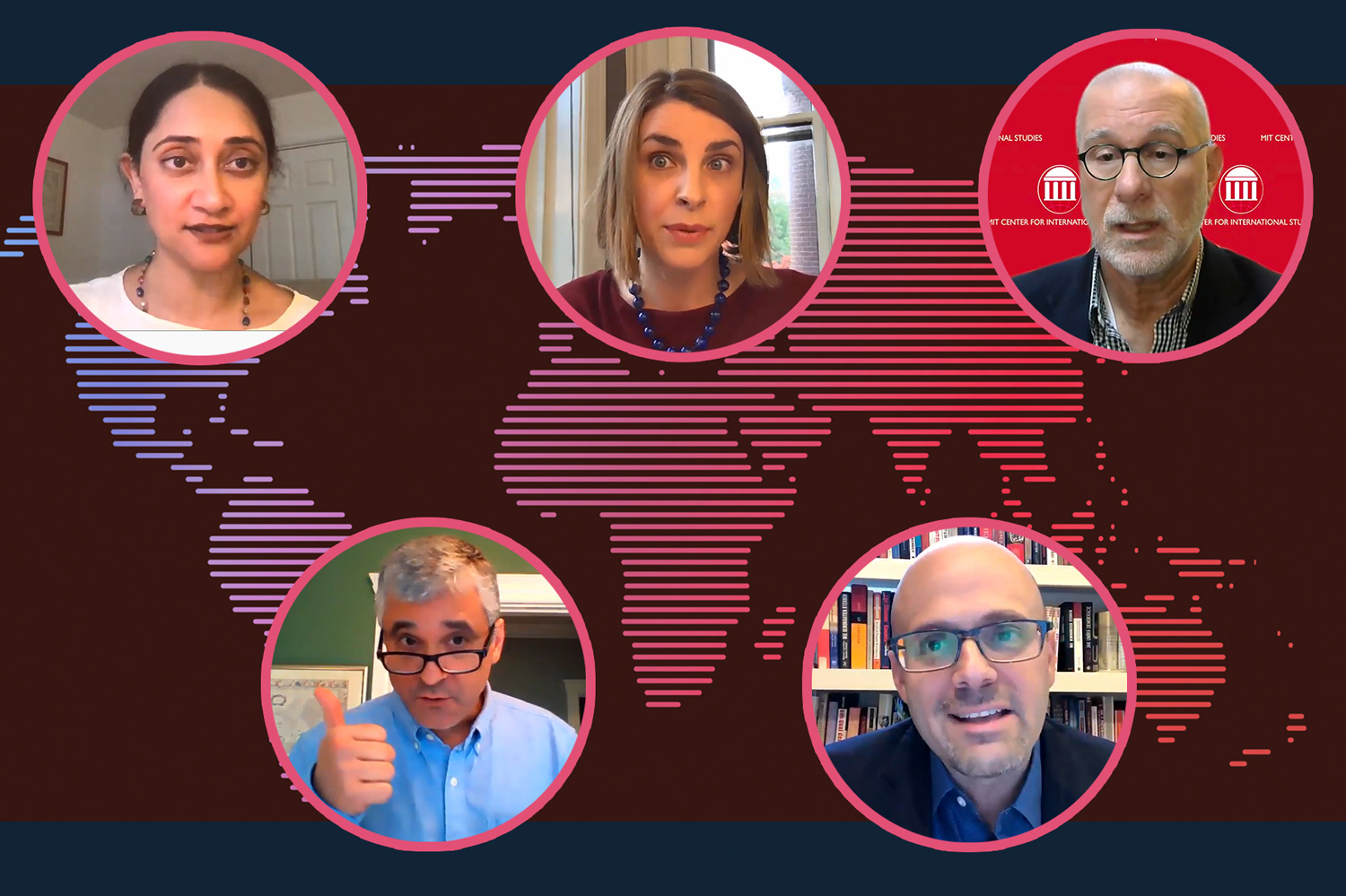 When the Cold War ended in the early 1990s, it seemed democracy had triumphed among political systems. But more recently, many democracies have run into a common set of troubles, with authoritarian leaders grasping enough power to create illiberal regimes.

Understanding how this happens was the focus of MIT’s Oct. 23 Starr Forum, an online event hosted by the Center for International Studies (CIS) in which a series of experts evaluated the condition of democracy around the globe.

“Democracies do not die the way they used to die,” said Steven Levitsky, a professor of government at Harvard University, during the virtual event. “Democracies used to die at the hands of men with guns. During the Cold War, three out of every four democratic breakdowns took the form of a classic military coup. … Today democracies die in a much more subtle way. They die at the hands not of generals, but of elected leaders, presidents, prime ministers who use the very institutions of democracy to subvert it.”

Indeed, while in the U.S. democratic difficulties are often expected to create a “constitutional crisis,” this can be an “amorphous term” that fails to address the longer-term political dynamics, noted Susan Hennessey, the executive editor of the Lawfare blog, general counsel of the Lawfare Institute, and a Brookings Fellow in national security law.

The Starr Forum is a long-running series of events on global affairs and foreign policy. The discussion was moderated by Richard Samuels, the Ford International Professor of Political Science at MIT and director of CIS.

Friday’s panelists were Levitsky; Hennessey, who is also co-author (with Benjamin Wittes) of the book “Unmaking the Presidency” (2020); Neeti Nair, an associate professor of history at the University of Virginia, who is the author of “Changing Homelands: Hindu Politics and the Partition of India” (2011); and Daniel Ziblatt, also a professor of government at Harvard University and co-author, with Levitsky, of the book “How Democracies Die” (2018).

In those polities, what emerges is “competitive authoritarianism,” Levitsky said, where “the playing field is pretty heavily skewed against the opposition.” Looking around the globe, he added, “Hungary is a clear case. Venezuela, maybe Poland, maybe India, hopefully not the United States.” In his view, this outcome usually happens either when populists achieve significant electoral majorities without feeling beholden to democracy — such as current and past regimes in Peru, Venezuela, Turkey, and Ecuador — or when political factions convince themselves they must limit democracy to retain power.

In the latter case, in the U.S. South following Reconstruction, Levitsky noted, states added a wide range of voting restrictions aimed at African-Americans, including poll taxes, literacy taxes, and property requirements; Black turnout in the region fell from 61 percent in 1880 to 2 percent in 1912.

Still, every situation is different, noted Ziblatt, who focused his remarks on the fall of Weimar Germany. While an “extreme case,” he observed, Germany “looms so large over all of our discussions of democracy” and its safeguards.

“The Weimar experience exposed a deep vulnerability of democracy,” Ziblatt said, namely, “that voters can elect an autocrat to power. Democracy can die at the ballot box.” However, he added, elites can be culpable as well: The Nazi party never had support of more than about 30 percent of voters, but German conservatives made a fateful error by forming a coalition with Hitler, in an attempt to marginalize him.

“When authoritarians come to power, they come into office not on their own, but with the enabling aid of political allies from inside the political establishment,” Ziblatt said. “This is a central lesson of the Weimar breakdown. It was an elite miscalculation.” The same applies to Italy in the 1920s, he noted, where Mussolini supposedly grabbed power through his “March on Rome,” but actually a negotiated agreement with King Victor Emmanuel III gave Italy’s fascists seats in parliament.

“I don’t want to minimize the power of fascist and authoritarian social movements,” Ziblatt said. “They were real, they are real today. My point is simply that when extremists first arrive on the scene and appear to threaten democracy, they should be taken seriously, and marginalized … mainstream politicians must do everything possible to form coalitions, even sometimes very uncomfortable coalitions with parties they may disagree with or dislike, but who accept the basic democratic rules of the game, in order to keep extremists out.”

To be sure, sometimes well-established figures gain power and institute substantial changes too — as Nair noted in her remarks about India and prime minister Narendra Modi, who has oriented recent policy around a Hindu nationalist vision.

In this case, Nair said, the prime minister “does not fall into the prototype of the outsider, who was allowed in to lead the political party by gatekeepers of establishment politicians who should have known better.” Nair added that India now has “spaces where the rule of law has been a cover for extreme lawlessness,” but she concluded on a more sanguine note, looking toward the possible 2023 elections as a moment when the country’s politics might shift again.

“I hold that India, because of its many regional political parties that can and have come together in the past, its enormously diverse and strong civil society, most recently in evidence during protests against the citizenship act of 2019, [and] its independent media … and some of its still independent judiciary, can withstand this latest grave crisis to democracy,” Nair said.

Looking at the U.S., Hennessey emphasized the remarkably broad powers the country’s founders had given the presidency, many of which sustain themselves through norms, such as the tradition of largely depoliticized presidential appointments to key law-enforcement positions, and congressional approval of many presidential appointees.

There has been, Hennessey noted, “a really alarming erosion” of these practices recently. As a result, she added, “the institutions still exist, the processes still exist, we still observe the technicalities of the constitutional system, but they’re hollowed out and they’re stripped not just of their legitimacy, but they no longer fulfill their intended constitutional purpose.”

Next week’s general election, Hennessey observed, will therefore matter in terms of way the executive branch functions, the relationship between the branches of government, and the robustness of the U.S. system as generally practiced in recent decades.

“The election is a pretty blunt instrument,” Hennessey said. “It’s a moment in which we either ratify or reject this sort of vision of the presidency.”

Understanding the significance of elections for the trajectory of democracy itself, in this view, is an important part of active citizenship, given that many of today’s consequential changes in governance around the globe come not from having tanks in the streets, but from leveraging results at the ballot box.

“It happens behind a pretty credible façade of democracy,” Levitsky said. “Many citizens aren’t fully aware of what is happening often until it is too late.”

“From Controversy to Cure” documentary chronicles the biotech boom in Cambridge, Massachusetts