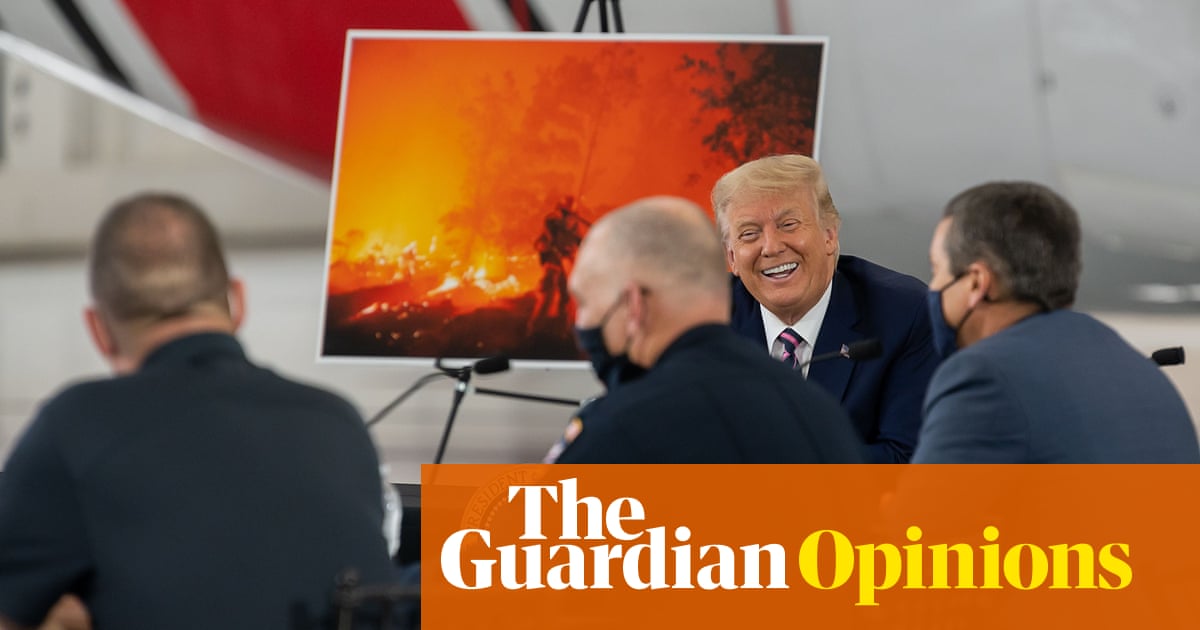 Anyone in Australia who witnessed the Black Summer bushfires (as I did), and anyone in the US who experienced the thick smoke from our western wildfires (as I have), knows how much damage climate change is already doing. The stark reality is that worldwide efforts to avert ever-more catastrophic climate change impacts lie in the balance in the 2020 US election.

Donald Trump will go down in history bearing substantial responsibility for the deaths of over 200,000 Americans due to his rejection of the advice of public health experts and his refusal to endorse policies such as social distancing and mask-wearing that could have saved many thousands of lives. But his rejection of the science of climate change sets the stage for a far greater toll. Far more human lives will be lost from the impacts of climate change if we fail to act.

Whether or not Trump gets re-elected – and how other countries like Australia respond to the outcome of the US election – could determine the fate of our planet. Indeed, I’ve stated that a second Trump term might well be “game over for the climate” if it leads to the collapse of international efforts to act.

The damage caused by Trump’s climate denial is painfully visible within the US as we endure climate change-fuelled extreme weather events, including unprecedented wildfires in the west and unprecedented hurricanes in the east. But the damage can be felt around the world. Trump has proudly, and shamelessly, trumpeted his climate denialism on the global stage, joining with petrostates such as Russia, Saudi Arabia and Brazil in opposing international climate efforts.

By pulling the US out of the Paris agreement (one of the first and only campaign promises he kept) Trump ceded America’s leadership on the defining challenge of our time. Thus far, other countries have fortunately filled the leadership void, at least temporarily. The EU and China, with its new net-zero pledge, have stepped up to the plate, recognising that they will benefit from the opportunities of a clean energy economy and better protect their citizens from dangerous climate change impacts.

But nobody stands to benefit more from climate action, or lose more if we fail to act, than Australia. Having spent a sabbatical leave down under earlier this year, aimed at collaborating with scientists in Australia to study the impact of climate change on extreme weather events, I instead witnessed those impacts first-hand. I saw the muted beauty of the Blue Mountains when shrouded in wildfire smoke. If Trump is re-elected, and we collectively continue down a path of insufficient climate action, it may not be long before those fires rage year-round, and the Blue Mountains are lost in a perpetual grey and dismal haze.

It’s the same with the vibrant sea life of the Great Barrier Reef, which I was fortunate enough to witness with my family during my time in Australia. The delicate ecosystems of the GBR are already on the ropes, with fossil fuels pushing up temperatures in the ocean to the point where bleachings occur with such frequency and ferocity that corals simply cannot recover. Research released this week found that the reef has lost half its coral, largely due to warming oceans caused by climate change. Add the impact of ocean acidification from increasing carbon emissions, and we could sadly, within a decade or two, be reading the GBR’s obituary for real.

It doesn’t have to be like that. For one thing, renewable energy costs are plummeting while the technology just keeps getting more efficient and better, so dirty energy no longer makes economic sense. For example, on one recent Sunday, all the electricity demand for the entire state of South Australia was met by solar power alone, and every state and territory in Australia has committed to go carbon neutral by 2050. Here in the US, we’ve seen a record number of cities and states stepping up on climate goals too, knowing clean energy is good for their communities’ health, resilience and prosperity.

Policymakers must accelerate the shift to clean energy that is already under way. As we’ve learned in the Trump-era, some fossil fuels are too far gone for even the most determined polluter-in-chief to save. Though another term would give Trump time to defend his environmental rollbacks in court and solidify his dirty energy policies, he has already failed to save coal from market forces, and another four years isn’t going to reverse the long-term decline of the industry.

This is a cautionary tale for Australia. In both the US and Australia, conservative politicians seem more eager to bail out dirty polluters than protect the public, denying politically inconvenient science in order to offer lavish payouts to help unprofitable fossil fuel companies.

If we are to avert catastrophic warming, we must do just the opposite, providing financial incentives for renewables and disincentives for fossil fuels. That will level the playing field, and accelerate the clean energy transition.

We must take the earliest exit possible off the fossil fuel highway. By trying to squeeze out the last drop of fossil fuel industry profits, the Morrison government could well be on its way to bleaching the life from Australia’s coral reefs and blighting the blue of its mountains.

There is some good news, however. Regardless of whom Americans vote for – and for the sake of the planet, I hope it’s Joe Biden and the Democrats – Australians can still work together for structural change at home. You can’t solve it alone, but we also can’t solve it without you. Australia has seen that the sun can power an entire state’s electricity for a day. Now it’s time to make that happen every day.

Australia must distance itself from the handful of bad petrostate actors who have sabotaged global climate action and rejoin the coalition of the willing, when it comes to the battle to save our planet.

• Michael E. Mann is distinguished professor of atmospheric science at Pennsylvania State University. He is author of the upcoming book The New Climate War: The Fight to Take Back Our Planet, due out in January (Public Affairs Books)

The key to lowering CO2 emissions is made of metal

How do you deal with 9m tonnes of suffocating seaweed?