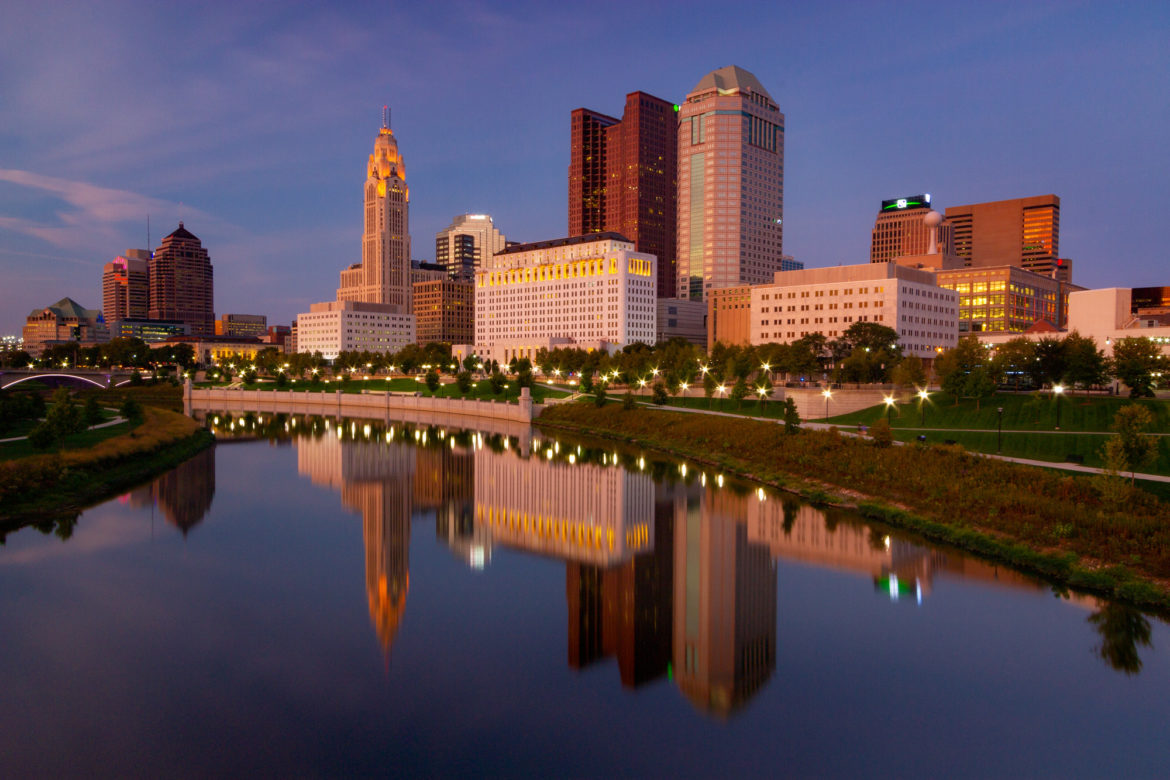 Ballot Issue 1 could lower the Ohio capital city’s greenhouse gas emissions by nearly a fifth, according to supporters.

Columbus, Ohio, voters are deciding this election whether to let city government seek out and collectively bid for renewable electricity on their behalf.

The city’s goal “is to provide residents with 100% clean, renewable electricity through a community choice aggregation program by 2022,” said Erin Beck, director of special projects for the city of Columbus. “Aggregation gives us the leverage to drive these changes in a win-win for consumers, our economy and the environment.”

Under a 1999 law, more than 100 Ohio communities have so far opted for community aggregation plans to supply residents’ electricity. Until recently, however, areas in central and southeast Ohio have lagged behind the northeast, northwest and southwest regions in adopting the plans.

“I see it as a community-wide cooperative effort to aggregate [an area’s] purchasing power,” said Roger Wilkens, former director of the Southeast Ohio Public Energy Council, who now heads up the Re-POWER Network initiative for the Athens Energy Institute. In his view, aggregation can help people get electricity more affordably, while also enabling community-wide clean energy projects. “And it’s really a powerful way for a community to band together and make these transitions off of fossil fuels.”

Columbus’s plan stands out from others in Ohio both because of the size of its population (922,223) and because city leaders also made an upfront decision to procure all renewable energy for covered residents who stay in the plan. The standard offer for Cleveland and Cincinnati’s aggregation plans also is a 100% renewable plan, although those cities are smaller. All-green power options also are offered by some other communities’ plans, although customers may have to affirmatively choose them.

Advisory group meetings to plan for the Columbus initiative began last year, and Mayor Andrew Ginther announced the ballot initiative during his State of the City speech in February. After a public bidding process, Columbus selected Trebel Energy as an aggregation consultant in May. The city then solicited competitive bids from energy suppliers in June.

AEP Energy was selected as the preferred supplier among four responses. Virtual public hearings were held on July 7 and Sept. 2. The final agreement would go through a public City Council approval process as well, Beck said.

Residents will be able to opt out any time, and the ballot initiative won’t raise taxes, according to Issue 1 spokesperson Amanda Wurst, with the Remington Road Group, which is a communications consultant working with Trebel.

“Leveraging aggregation to achieve clean energy goals not only cleans up the air we breathe and the water we drink, but also supports a growing industry in Ohio,” Wurst said. “From economic and environmental perspectives, Issue 1 works.”

Supporters tout the proposal as a way to significantly advance climate action in Ohio despite regression and stalemates on clean energy policies at the state capitol.

“This type of bold action at the local level is more urgent than ever,”  said Heather Taylor-Miesle, president of the Ohio Environmental Council Action Fund.

Over the last several years, lawmakers at the state level enacted various roadblocks to the expansion of renewable energy in Ohio. One 2014 law tripled property line setbacks for wind farm turbines, while another froze and then weakened targets the state’s renewable energy and energy efficiency standards. Then last year the Ohio General Assembly mostly gutted those standards as part of the nuclear and coal bailout law at the center of a federal criminal case.

“Issue 1 can lower carbon emissions in Columbus 1.2 million megatons or 19% of our total,” said Cathy Cowan Becker, who heads up Columbus-area volunteers for the Sierra Club’s Ready for 100 program. The city’s population is the 14th largest in the country, and Ohio is the sixth highest carbon-emitting state, she noted. “We have no time to waste in tackling the climate crisis,” Becker added.

Like other parts of the Midwest, Ohio has already been experiencing significantly more precipitation compared to the first half of the 20th century. Statewide, about a sixth of Ohio’s farm acreage couldn’t be planted last year, largely because of heavy rainfall that persisted through the planting season.

Additional environmental organizations supporting the proposal include the Natural Resources Defense Council Action Fund, the Nature Conservancy in Ohio, Power a Clean Future Ohio and others.

Various church leaders have also endorsed the plan, as well as several labor groups, such as the Coalition of Black Trade Unionists, the Central Ohio Building and Construction Trades Council, IBEW, and the Central Ohio Labor Council for the AFL-CIO, Beck said.

Aggregation is not the only way to get more renewable energy for Columbus, noted Noah Dormady, an energy and environmental policy analyst at Ohio State University. Customers “can currently, any time they wish, contract with any company of their choice for renewables,” he said.

Indeed, if the aggregation plan passes, it won’t change existing customer relationships for people who have contracts with competitive suppliers. However, Wilkens noted, many customers face knowledge barriers.

“You have to do a fair amount of research to make good decisions,” Wilkens said. “And so banding together makes good sense.”

Meanwhile, the Ohio Coal Association stands against the proposal.

“At best it’s a fairy tale and at worst it’s a fraud!” said Mike Cope, president of the Ohio Coal Association, wrote in an email. Among other things, he views the claims from AEP that it can provide enough cost-competitive renewable power as “utterly impossible and ridiculous.”

As in other cities with community aggregation, Columbus residents would retain the final choice over whether to opt out. Letters detailing rates and opt-out procedures would be sent in April and May.

“However, even once the program begins, residents can still opt out at any time with no fees or penalties,” Beck said. Some other areas with aggregation charge a one-time fee for switching outside of a customer’s opt-out window every few years.

If the initiative passes, the city expects the plan would go into effect starting in June 2021.