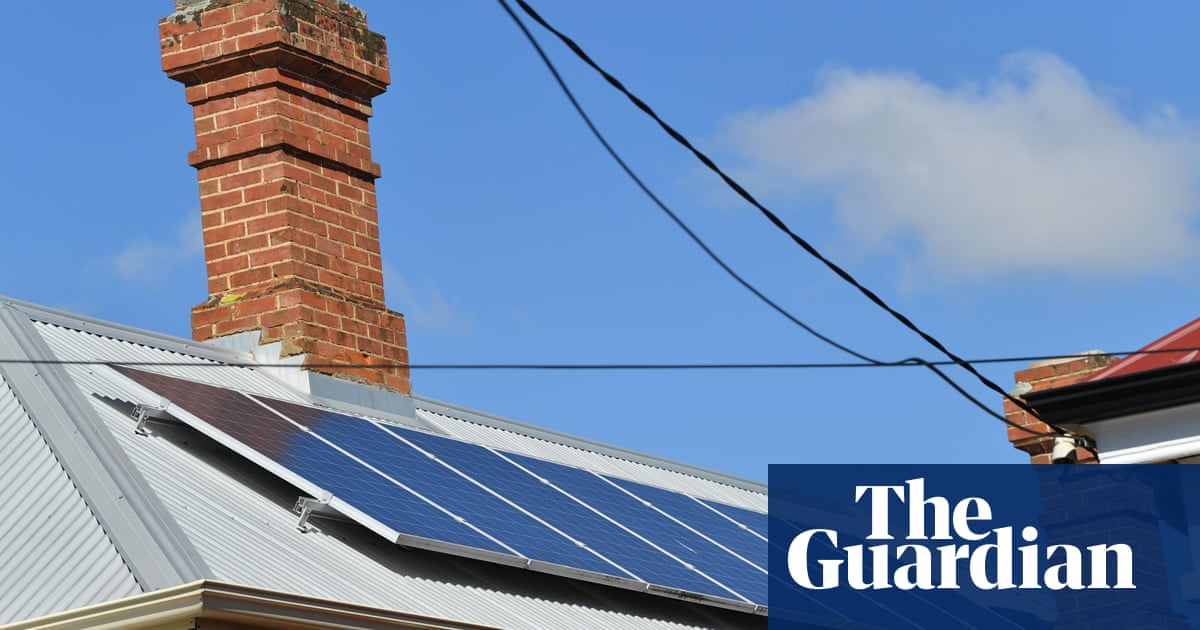 Australians’ embrace of rooftop solar panels and the Covid-19 shutdown in Victoria have combined to reduce the amount of power being drawn from the national grid, with several states setting record lows for daily large-scale electricity consumption.

The drop in electricity use contributed to wholesale electricity prices being 45% to 48% lower than at the same time last year in all eastern states and territories except Tasmania.

Similarly, wholesale gas prices were nearly 50% less than in the third quarter of 2019, largely due to demand for the fossil fuel falling about 5% due to a decline in both gas-fired power generation and demand for liquified natural gas exports.

The drop in gas consumption coincided with the Morrison government arguing that Australia needs more gas to drive the economic recovery from the coronavirus pandemic.

The Australian Energy Market Operator said wholesale electricity and gas prices were at their lowest for this time of the year since 2014 and 2015 respectively.

Aemo’s chief executive, Audrey Zibelman, said the uptake of residential and commercial-scale solar had continued at record pace and was largely responsible for new minimum records for operational demand in South Australia, Victoria and Western Australia.

The Green Recovery: how to fix Australia’s energy-inefficient homes – video

Zibelman said electricity prices had fallen due to reduced demand for large-scale generation, improved reliability of coal plants in New South Wales and Victoria, a reduction in the price of black coal generation and increased competition from new wind and solar coming into the system.

Demand for power from the grid fell by 1.4%, or 313 megawatts, compared with a year earlier. About 70% of the fall was due to the increase in rooftop solar and 30% due to a drop in underlying demand linked to Covid, mostly in Victoria.

She said gas prices were down due to lower demand across all sectors and the slump in international prices, which fell before the pandemic and dropped further after it hit.

While wholesale prices have fallen sharply, the reduction in household bills is likely to have been smaller – wholesale costs usually make up about a third of what consumers are charged.

The energy and emissions reduction minister, Angus Taylor, took credit for the reduction and said it would be welcome relief for households and small businesses. “Falling wholesale electricity prices must be passed on to consumers and the government’s big stick legislation will ensure this happens,” he said.

Renewable energy investment has reached record levels over the past three years. In the case of large-scale generation, this has largely been driven by a rush to fill the national 2020 renewable energy target, and helped by a dramatic reduction in the cost of solar and wind energy.

While installations of earlier commitments continue, Reserve Bank economists and the clean energy industry have reported a 50% fall in renewable energy investment last year after the target, which required retailers to make clean energy about 23% of what they sold, was not extended or replaced. The industry has also blamed delays in new plants getting grid connections.

Meanwhile, the rate of rooftop solar installations has continued to increase, with the Clean Energy Regulator reporting the number of homes with a system is approaching 2.5m. Its rise has so far offset the fall in large-scale investments.

An Aemo roadmap of what an optimal national electricity market would look like to 2040 if it were designed with a focus on security, reliability and the lowest cost for consumers found that renewable energy may at times provide nearly 90% of electricity by 2035, but would need to be supported by a range of “dispatchable” power sources that can be turned on and off when needed. The amount of gas-fired power would be likely to fall as pumped hydro and batteries come online, and there would be no place for new coal-fired generation.

According to the website Open NEM, about 32% of electricity over the past month has come from wind, solar and hydro energy. Coal provided 62% of generation and gas nearly 6%.