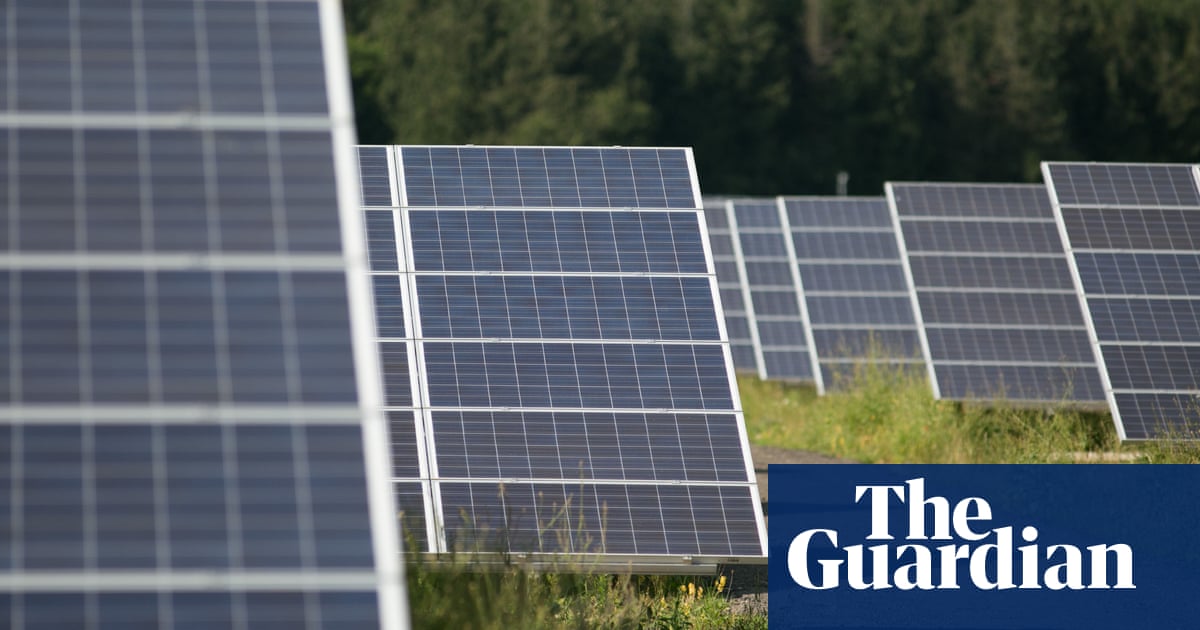 An aggressive push towards 100% renewable energy would save Americans as much as $321bn in energy costs, while also slashing planet-heating emissions, according to a new report.

Joe Biden, the Democratic presidential nominee, has vowed to eliminate greenhouse gases from the US power grid within 15 years and essentially zero out emissions by 2050, a plan assailed by Donald Trump as costly and detrimental to the American economy.

But a new analysis by Rewiring America, an energy policy organization, finds that households would benefit financially from a complete switch to clean energy sources such as solar and wind. More than 40% of energy emissions are determined by appliances in and around the home, according to the report, such as heating, electricity, refrigeration and car use.

Should all of these related factors be fully electrified and sourced from clean energy, households could save as much as $321bn in energy costs, the report finds, or up to $2,500 a household a year. Households would be faced with the upfront costs of installing solar panels and electric devices such as stovetops and heat pumps, but Rewiring America says strong government assistance for renewables would help deliver long-term savings.

“If we electrify everything, the savings are more than enough to return money to households,” said Adam Zurofsky, executive director of Rewiring America. “Too often we are told doing the right thing for the environment requires sacrifice and costs more. But no one is talking about the upside – we can actually make a better economy and save people money and a byproduct will be to cut emissions from residential buildings.”

Much of the savings are derived from reducing the wasted energy involved in digging up and delivering fossil fuel-based power to homes. By taking measures such as backing mortgage-style payments for solar panels to lessen reliance upon the grid, the federal government can make it “dirt cheap” for people to switch to renewables, Zurofsky said. Solar is now the “cheapest source of electricity in history”, according to the International Energy Agency, with the US consuming a record amount of renewable energy last year.

Such a scenario would be difficult given the required ramp-up in solar across US towns and cities, according to Brian Snyder, an energy and environment expert at Louisiana State University. “We would need to build an electrical generation system on top of our roofs that is the same size as contemporary US generation,” he said.

Issues in the supply chain and patchier generation in less sunny parts of the country would compound this challenge, Snyder added.

Zurofsky said the technical potential of rooftop solar comes from the federal government’s own estimates and was feasible. “That does not mean it will be easy to do or that we won’t have to stretch our existing capacities to make it happen,” he said, adding that the report aimed to show “what the future can look like if we are motivated to make it so”.

Biden has outlined a $2tn plan to combat the climate crisis, which he has called an “existential threat” to the US. The plan envisions the creation of millions of jobs in renewable energy, the retrofitting and weatherization of homes and commercial buildings to improve their energy efficiency and a boost to the nascent electric vehicle market.

Trump, who has consistently dismissed the realities of climate science, has derided Biden’s agenda as something that would “kill” existing energy jobs in the US.

But it appears that American voters are broadly in favor of bolder action to address global heating in the wake of a brutal year of wildfires and hurricanes that scientists say are being fueled by the climate crisis. A New York Times and Siena College poll this week found that two-thirds of voters approve of Biden’s plan, with overwhelming support for the policies among younger voters.

Snyder said the Biden plan is “probably the most ambitious yet plausible plan I’ve seen” on the climate crisis.

Ministry of Education calls meeting on pending Class 12 board exams