The house that cork built: is this the ultimate eco-friendly material? 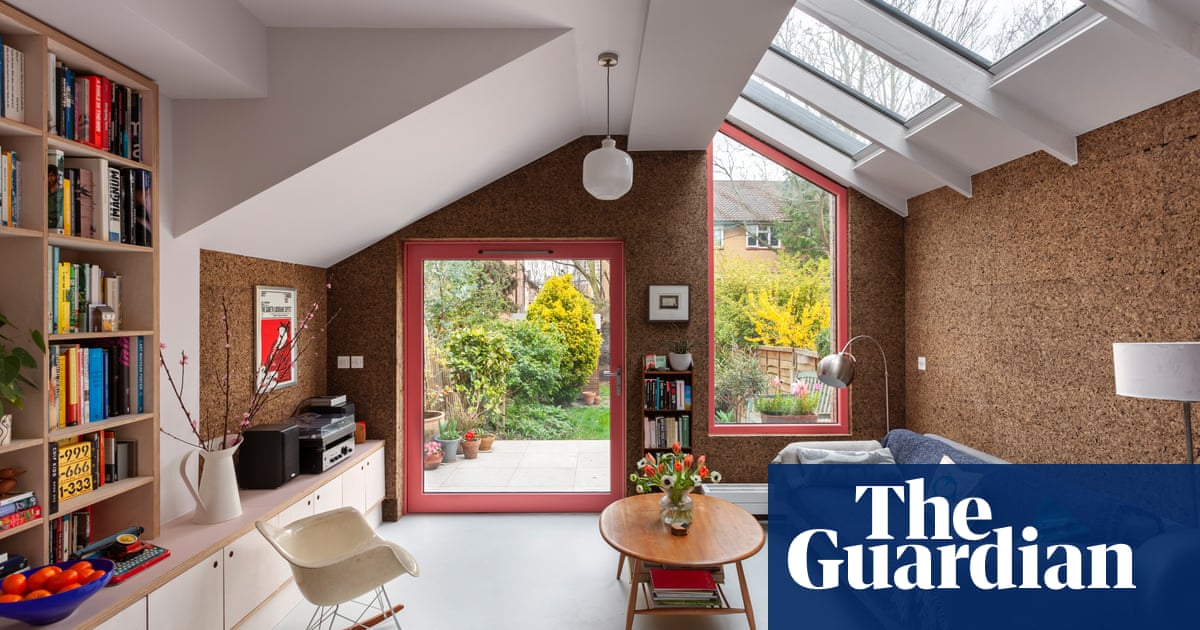 When Dan Barber and Hat Margolies bought a two-bed Victorian terrace house in 2013, the entire building needed an overhaul. It had leaky pipes, asbestos and rattling windows; and it needed rewiring, new radiators and a new boiler. Wind whistled through the front room floorboards. “The light and proportions made it really special but there were no original features – the fireplaces had long gone,” says Margolies, a photographic agent with an eye for vintage furniture.

But the couple saw it as a chance to make their new home, in south London, as eco-friendly as they could: to conserve energy, and recycle and reuse as much as possible. They lived with the house as it was for five years, during which time their second daughter was born, and then employed NimTim architects to transform it on a tight budget.

The centrepiece of the redesign is a garden-facing extension, clad in cork inside and out, built on to a kitchen that replaced a dining room. “The kitchen dated back to the 1960s, so there was no guilt about tearing it out,” says Margolies. “We never in a million years imagined using cork,” says Barber, a graphic designer, who was surprised when architect Nimi Attanayake suggested this wildcard material, instead of brick. He initially worried that cork might leak until Attanayake reminded him that it’s used to seal wine bottles. The use of cork both internally and externally is “incredibly experimental”, says Attanayake; but while there aren’t many examples of this in the UK, it’s more widespread in Europe.

It’s an affordable option because it doesn’t need cladding externally or plastering internally, and installation is quick. “Cork has so many benefits – it’s waterproof, lightweight, a good insulator, breathable and sound-absorbing,” Attanayake says. “Over time, it weathers to a silvery-grey as it gets bleached by the sun,” Barber notes. “It’s so unprocessed, it’s got a beautiful pattern to it. It feels lovely and even has a nice, smoky smell.”

But it was the eco credentials that really did it for Barber and Margolies. Harvested from the bark of cork oak trees often grown in Portugal, it’s natural, chemical-free, carbon-neutral and cheap to produce. Cork trees are fast-growing and harvested only once every nine years throughout their 200-year lifetime. As a material, cork lasts decades, is biodegradable and easy to replace if necessary.

In the couple’s extension, the cork – 13 inches thick – is attached to breeze blocks on both sides. Existing brick walls and the ceiling are plastered and painted a putty grey with a hint of pink (“Down” from littlegreene.com). The cork softens the more architectural angles and lines of the ceiling. In theory it could be used as a giant pinboard, but the pair haven’t put any pictures up yet.

Light floods the extension through two large pink-framed picture windows – one an oversized pivot glass door – and six metal-framed skylights. “The window and door frame views of the garden,” Barber says. A sofa sits along one wall, with an Ercol coffee table and lamps. A long, bespoke piece of floor-to-ceiling shelving doubles as an office nook with Margolies’s childhood Anglepoise lamp.

A dining area with a beech table from the Danish brand Hay, which comfortably seated 15 last Christmas, is a few steps up from the extension, along with a built-in bench; the kitchen is a couple more steps beyond that. The family gravitates to the new extension now. “We can all be together while doing different things,” Barber says.

The architects also converted the empty, uninsulated loft into a double bedroom and en suite, complete with pink window frames that match those in the extension. For the new staircase up to the loft, floorboards were reclaimed from the kitchen and painted pink to match the window frames. Now, with three bedrooms, they can accommodate the whole family as their two daughters grow up.

Downstairs, the small front room is a cosy snug with a TV and sofabed for guests; the couple have insulated the void under the floorboards with eco-friendly wool insulation. Elsewhere, efficient radiators have been installed; lavatories have water-conserving double flushes; showers have eco settings; and old strip lights have been switched to energy-efficient and LED bulbs.

To minimise spending, the couple sourced as much as they could from outlet stores, sample sales and auction houses, as well as Gumtree, Freecycle and local Facebook selling forums. Over the years, they have added to their collection of mid-century modern furniture, including an Eames rocker that Margolies bought Barber for his 30th birthday from a secondhand shop.

The family adopts a low-carbon approach to everything: they walk to school, cycle to work, and don’t own a car. “We try to tread lightly as much as possible, and try to avoid waste, so we buy food from local farmers’ markets and order staples in bulk from [wholesale co-operative] Suma together with around 20 other people,” says Margolies. At home, all energy is sourced from renewable suppliers, and the couple haven’t flown for years, taking trains or ferries when they go on holiday.

They are ahead of the curve: millions of heritage retrofits will be required nationally to meet the Climate Change Act’s targets to reduce carbon emissions by 80% by 2050. According to the Energy Saving Trust, if every household took action on energy efficiency now, we could achieve 11% of the UK’s 2050 target.

Although the house is now bigger, it is much better insulated and easier to heat. “Before, we used to be freezing with the thermostat at 21C – now we’re toasty at 19C,” Barber says. “Our girls have seen firsthand how we’ve customised this house,” Margolies adds. “They’ve learned it’s not essential to buy brand new, and that if you put the work in, it’s possible to create something amazing.”