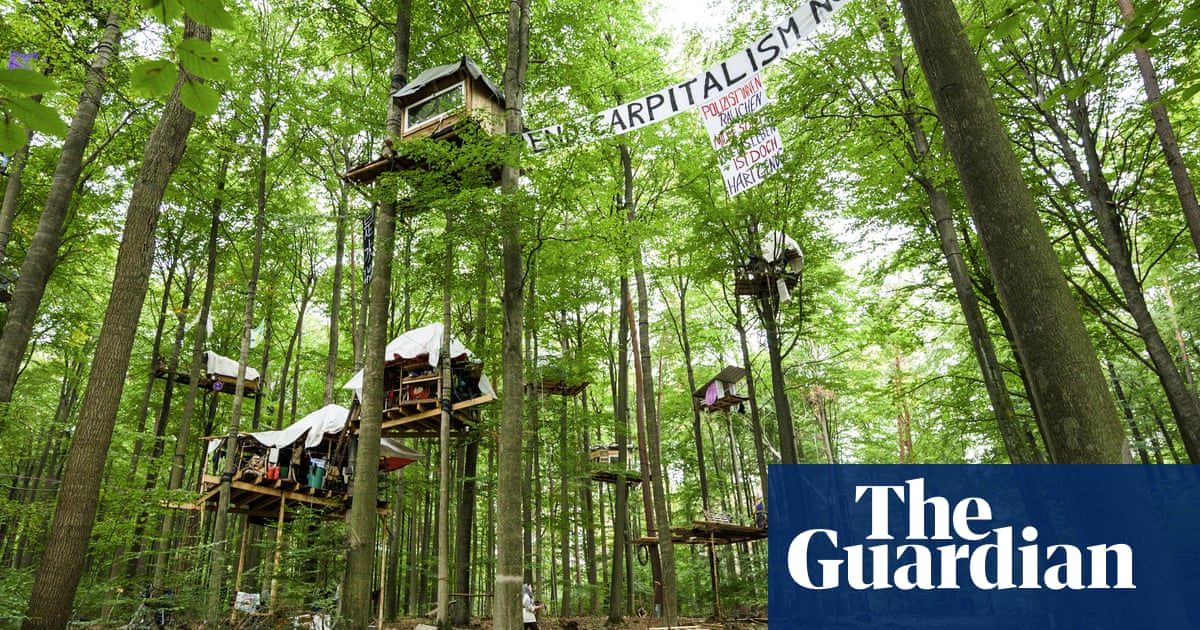 Thousands of climate activists gathered in a stretch of woodland north of Frankfurt on Sunday as a planned motorway extension through the Dannenröder forest pits the autobahn against 250-year-old oak trees.

About 27 hectares (67 acres) of forest are to supposed to cleared by next February to make way for a new 3km stretch of the A49 dual carriageway. Police in the state of Hesse are preparing for months of stand-offs with protesters, who say the erosion of a healthy mixed forest makes a mockery of the German government’s ambitious climate targets.

“It is a catastrophe that such an old forest still has to make way for the autobahn in 2020,” said Carola Rackete, an activist who rose to prominence in June 2019 as the captain of migrant rescue ship Sea Watch 3, who has joined the protests. The demonstrators are calling on the government to instead invest in expanding rail transport infrastructure.

As forestry workers began to fell the first trees on Thursday to make way for the motorway, police destroyed barricades, treehouses and makeshift platforms built by activists, who have been occupying parts of the forest for the last year. 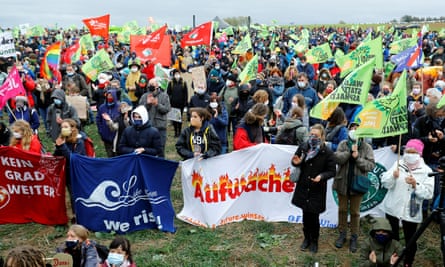 Protesters near the Dannenröder forest on 4 October. Photograph: Ralph Orlowski/Reuters

On Friday, police said they had made 16 arrests in the adjacent Herrenwald where the clearing began, including 10 activists who had to be pulled down from treetops via hoisting platforms. In a video posted on social media, masked activists conceded that “we have sadly failed to stop the clearing, because there were too few of us”.

But protests have since proliferated, with activists temporarily occupying the Hessian state representation’s offices in Berlin on Friday, and about 300 cyclists closing down a section of the south-bound lane of the A49 on Saturday.

Organisers said about 5,000 people travelled to the forest on Sunday morning to protest against the motorway plans and to take part in “guided nature walks” through the threatened woodland. Police put the number of demonstrators at about 2,000.

With work on the new motorway not due to begin until September 2021 and the woodland area too large to be closed off from activists, police said they were expecting “long-term resistance” against the infrastructure project.

Some of those protesting against the felling at Dannenröder were also involved in demonstrations two years ago at Hambach forest, a stretch of ancient woodland in North-Rhineland Westphalia that was due to make way for a coalmining project.

The construction company Deges, tasked with overseeing the construction of the motorway extension, says its project is essential to relieve congested roads and does not pose an existential threat to the stretch of woodland.

The company says it will only cut down 3% of the Dannenröder forest, and that old oaks only make up about 8% of the trees due to be felled. In turn, Deges has vouched to reforest 85 hectares of woodland, as well as setting up 10 new pond habitats for the endangered crested newt.

But environmental groups say the motorway plans are also symbolic of broader hypocrisy on behalf a German government feted abroad for its climate policies. “Some parts of this forest are 250 years old,” said Nicola Uhde of the German Federation for the Environment and Nature Conservation (Bund), “and there is simply not much of this kind of woodland around any more.”

Speaking on Wednesday at a United Nations summit on biodiversity, the chancellor, Angela Merkel, had urged countries to “turn the tide on a global scale” to protect the environment. “We have to use land and sea more sustainably and manage them in a more ecologically sound way,” she said in a video statement.

In the state of Hesse, the fate of the Dannenröder forest is also seen as a litmus test for the Green party, which has for the last two years governed the western state in a coalition with Merkel’s conservative CDU – a power-sharing deal that could be replicated at a federal level next year.

Ron Howard: ‘I’m introverted and risk-averse. But not when there’s a story to be told’

After hard times, The Jewish Week has a new owner.