Boris Johnson: UK must not return to status quo after Covid-19 pandemic 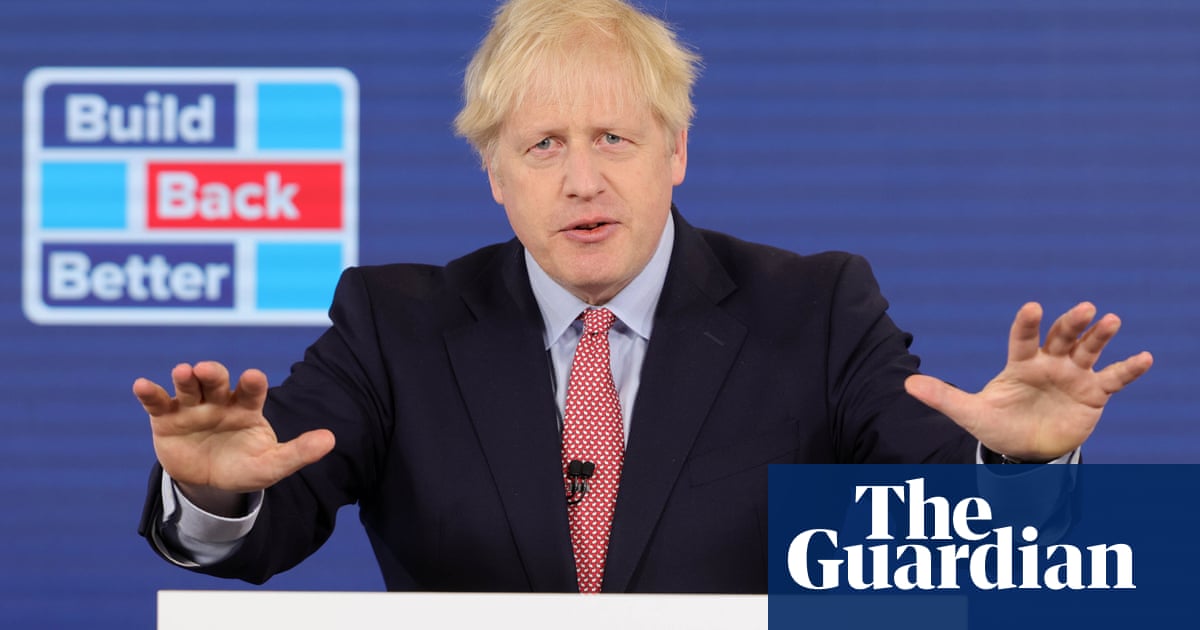 Boris Johnson has said the UK must not return to the status quo after the coronavirus pandemic, promising a transformation akin to the “new Jerusalem” the postwar cabinet pledged in 1945.

The prime minister also mounted a robust defence of the private sector, saying “free enterprise” must lead the recovery and that that he intended to significantly roll back the extraordinary state intervention the crisis had necessitated.

In a markedly upbeat speech, Johnson said the UK was and would be “the greatest place on Earth”, and that it was “the measure of the greatness of this country that we are simply not going to let [the pandemic] hold us back or slow us down”.

Speaking at the Conservative party’s virtual conference, the prime minister said the “ructions” caused by the pandemic would lead to a transformation of the UK by 2030, with mass home ownership, electric vehicles, better broadband and blue passports.

“After all we have been through, it is not enough just to go back to before. We have lost too much, we have mourned too many,” he said. “We have been through too much frustration and hardship just to settle for the status quo and to think that life can go on as before the plague, and we will not.”

In a speech that pledged to invest millions in wind power and electric vehicles, and a new settlement for care homes and homebuilding, he said the country would “learn and improve on the world that went before”.

Among the key pledges in the speech, Johnson said the government would:

Comparing the crisis to devastating wars and famines, he said: “History teaches us that events of this magnitude … they don’t just come and go. They are more often than not the trigger for social and economic change. That’s what we’re doing now, in the teeth of this pandemic. We’re resolving not to go back to 2019 but to do better.”

The prime minister also faced down his critics over questions about his own health.

“I’ve read a lot of nonsense recently about how my own bout of Covid has somehow robbed me of my mojo,” he said, calling the claims “self-evident drivel” and “propaganda you’d expect from people who don’t want the government to succeed”. However, he said he was “too fat”, which had exacerbated the disease, and he compared his condition to the UK economy.

“The UK economy had some chronic underlying problems: long-term failure to tackle the deficit in skills, inadequate transport infrastructure, not enough homes people could afford to buy – especially young people – and far too many people, across the whole country, who felt ignored and left out, that the government was not on their side. And so we cannot now define the mission of this country as merely to restore normality.”

Reiterating his pledge to recruit 20,000 new police officers, Johnson criticised the legal profession, saying his government would stop the criminal justice system from being “hamstrung by what the home secretary would doubtless, and rightly, call the lefty human rights lawyers and other do-gooders”.

Though Johnson underlined how he expected the private sector to be at the forefront of the economic recovery, his speech outlined many new public spending commitments – including the introduction of one-to-one teaching for both gifted and struggling students, as well as the overhaul of social care.

“We will fix the injustice of care-home funding, bringing the magic of averages to the rescue of millions,” he said. “Covid has shone a spotlight on the difficulties of that sector in all parts of the UK, and to build back better we must respond; care for the carers as they care for us.”

However, he said free enterprise would be at the heart of future growth, a key theme of previous Johnson speeches, and sounded an early warning about the extent of state intervention on schemes such as furlough. He said Rishi Sunak had “done things that no Conservative chancellor would have wanted to do except in times of war or disaster”.

“There comes a moment when the state must stand back and let the private sector get on with it,” he said. “We must not draw the wrong economic conclusion from this crisis.”

He said the state would help the private sector by “becoming more competitive, both in tax and regulation”.

The prime minister also set out plans briefed by Downing Street overnight to power every home in the UK with offshore wind energy within a decade, a move he said would create “hundreds of thousands, if not millions of jobs” in the next decade.

He added that the UK would “become the world leader in low-cost, clean power generation – cheaper than coal and gas”, comparing its offshore wind resources to Saudi Arabia’s oil wealth.

Johnson was a prominent critic of wind power during his career as a columnist, and joked in his speech that “some people used to sneer at wind power 20 years ago and say that it wouldn’t pull the skin off a rice pudding”, a phrase he himself used.

Downing Street said the initial investment would rapidly create about 2,000 construction jobs and enable the sector to support up to 60,000 jobs directly and indirectly by 2030 in ports, factories and the supply chains.

In a nod to Tory backbenchers who have threatened to vote down any future curbs on freedoms because of the pandemic, Johnson said he hoped there would be no more restrictions on daily life by the time of the next Conservative conference in 2021.

“I don’t know about you, but I have had more than enough of this disease that attacks not only human beings but so many of the greatest things about our country – our pubs, our clubs, our football, our theatre and all the gossipy gregariousness and love of human contact that drives the creativity of our economy,” he said.

Labour’s deputy leader, Angela Rayner, said: “The British people needed to hear the prime minister set out how he and his government will get a grip of the crisis. Instead we got the usual bluster and no plan for the months ahead.

“We end this Conservative conference as we started it: with a shambolic testing system, millions of jobs at risk and an incompetent government that has lost control of this virus and is holding Britain back.”