Cambridge University to divest from fossil fuels by 2030 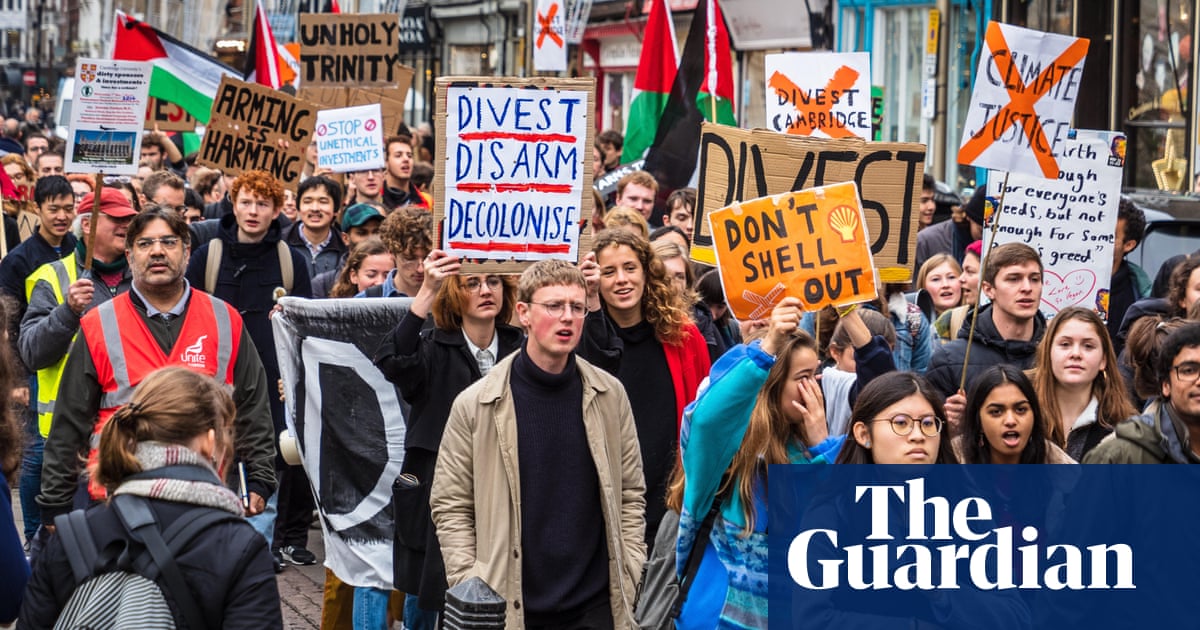 Cambridge University is to divest its multibillion-pound endowment fund from fossil fuel corporations after a five-year campaign by students, academics and politicians.

The vice-chancellor, Prof Stephen Toope, said that the university would divest from all direct and indirect investments in fossil fuels by 2030 and cut its greenhouse gas emissions to net zero by 2038.

“The university is responding comprehensively to a pressing environmental and moral need for action with an historic announcement that demonstrates our determination to seek solutions to the climate crisis,” Toope said during his annual address.

Cambridge has one of the biggest endowment funds – about £3.5bn – of any European university, and students and environmental campaigners have been engaged in a fight to force it to stop funding global polluters as the climate crisis worsens.

The Cambridge Zero Carbon Campaign welcomed the announcement as a “historic victory for the divestment movement”.

“After decades of close collaboration with the fossil fuel industry, Cambridge University has been forced to concede to divestment demands put forward by student and staff campaigners,” it said in a statement.

“This sends a resounding signal to BP, Shell, and ExxonMobil: no more will Cambridge University profit from the companies who have decimated frontline communities, bankrolled misleading climate science, lobbied against environmental regulations, while continuing to explore for oil even as the planet burns.”

The Guardian revealed in 2017 that the university had invested millions of pounds in offshore funds, including in projects to develop deep-sea drilling technology and in the oil and gas company Royal Dutch Shell.

Several Cambridge colleges were also found to have invested in fossil fuels, despite years of calls from hundreds of academics and students to stop investing in polluting industries.

Bill McKibben, the climate campaigner, author and founder of 350.org, said: “With this announcement, the product of hard work over many years by hundreds of devoted campaigners, the university finally puts its money where its brains are, acknowledging the overwhelming threat the fossil fuel industry poses to the planet’s climate.”

The step-by-step changes, which the university hopes will inspire other institutions, will lead to the endowment fund:
● withdrawing investments with conventional energy-focused public equity managers by December 2020
● building up significant investments in renewable energy by 2025
● divesting from all meaningful exposure in fossil fuels by 2030
● aiming to achieve net zero greenhouse gas emissions across its entire investment portfolio by 2038.

The university’s chief investment officer, Tilly Franklin, said: “Climate change, ecological destruction and biodiversity loss present an urgent existential threat, with severe risks to humankind and all other life on Earth. The investment office has responded to those threats by pursuing a strategy that aims to support and encourage the global transition to a carbon neutral economy.”

The university also announced that all future research funding and other donations will be “scrutinised to ensure that the donor can demonstrate compatibility with the university’s objectives on cutting greenhouse gas emissions before any funding is accepted”.

However, campaigners said they would keep the pressure on the university over its “extensive entanglement” with the fossil fuel industry.

“By continuing to take research funding, invite them to careers fairs and name their buildings after these companies, the university is clearly still in the oily clutches of this dirty industry,” said the Cambridge Zero Carbon campaign. “We will be campaigning to end all ties.”

The university says the new measures support its ongoing climate change initiative Cambridge Zero, which is aimed at using its worldwide teaching, research and vast network of collaborations to influence systemic change.

Cambridge Zero’s director, Emily Shuckburgh, said: “These announcements put Cambridge at the forefront of the Race to Zero, the global alliance committed to rapidly reaching net zero emissions, and hopefully it will inspire many others to join in the ambitious climate action in the lead up to the UK hosting Cop26 in 2021.”

Global analysis of how effective and topographic catchment areas differ