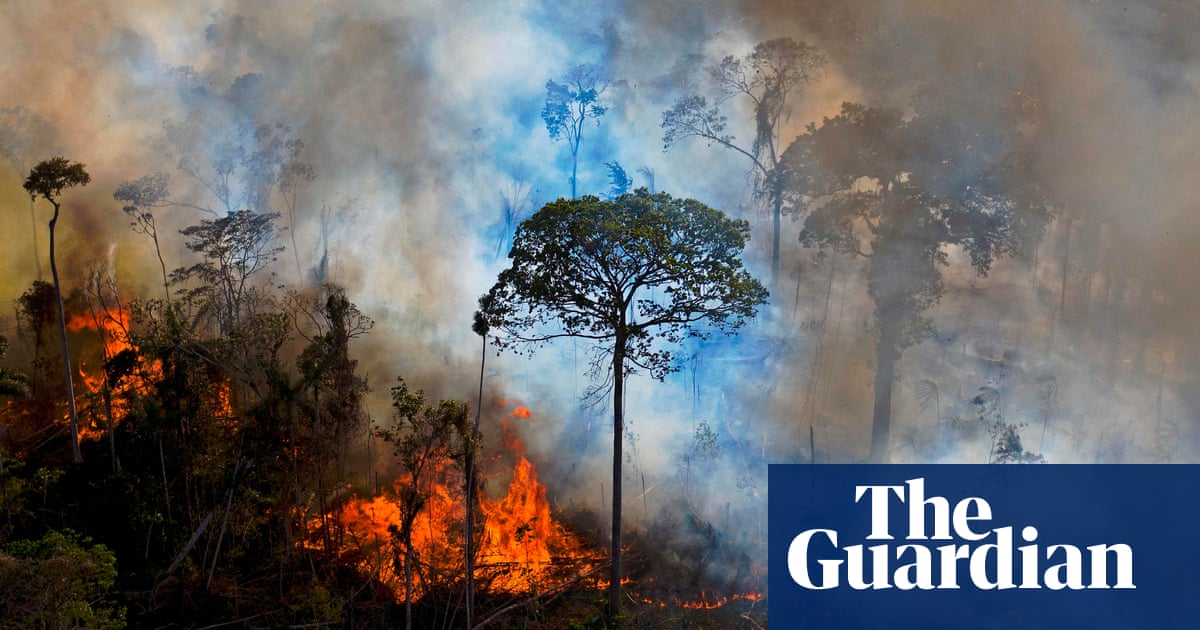 Much of the Amazon could be on the verge of losing its distinct nature and switching from a closed canopy rainforest to an open savannah with far fewer trees as a result of the climate crisis, researchers have warned.

Rainforests are highly sensitive to changes in rainfall and moisture levels, and fires and prolonged droughts can result in areas losing trees and shifting to a savannah-like mix of woodland and grassland. In the Amazon, such changes were known to be possible but thought to be many decades away.

New research shows that this tipping point could be much closer than previously thought. As much as 40% of the existing Amazon rainforest is now at a point where it could exist as a savannah instead of as rainforest, according to a study published in the journal Nature Communications.

Any shift from rainforest to savannah would still take decades to take full effect, but once under way the process is hard to reverse. Rainforests support a vastly greater range of species than savannah and play a much greater role in absorbing carbon dioxide from the atmosphere.

Parts of the Amazon are receiving much less rain than they used to because of the changing climate. Rainfall in about 40% of the forest is now at a level where the rainforest could be expected to exist as savannah instead, according to the study, led by the Stockholm Resilience Centre, based on computer models and data analysis.

Last year, Brazil’s president, Jair Bolsonaro, was warned that the continued destruction of the Amazon by fire and loggers would bring the region closer to a tipping point where rainforest could turn to savannah. This year’s fires in the Amazon are the worst in a decade, with a 60% increase in fire hotspots compared with last year.

There are about 3tn trees on the planet and they play a significant role in producing the oxygen we all breathe. But twice as many existed before the start of human civilisation.

Today, 10bn more trees are cut down than are planted every year. This destruction is a significant contributor to the carbon dioxide emissions that are driving the climate crisis. rees draw carbon dioxide back out of the atmosphere as they grow, and planting trees will need to play an important part in ending the climate emergency.

Forests are also a vital and rich habitat for wildlife. Earth is at the start of a sixth mass extinction event of species and the razing of forests and other ecosystems is the biggest contributor to the losses. Tropical rainforests are especially important, hosting 50% of known terrestrial species on only 6% of the world’s land. Trees are also important in controlling regional rainfall, as they evaporate water from their leaves.

In urban areas, the shade from trees has been shown to both cool city streets and reduce levels of air pollution. They can also boost people’s wellbeing as part of green spaces, with research showing a two-hour “dose” of nature a week significantly improving health.

Arie Staal, lead author of the study, said the ecology of rainforests meant that although they effectively produce their own self-sustaining rainfall in the right climate, they are also prone to drying out in the wrong conditions.

“As forests grow and spread across a region, this affects rainfall,” he explained. “Forests create their own rain because leaves give off water vapour and this falls as rain further downwind. Rainfall means fewer fires leading to even more forests.”

But if large areas of rainforest are lost, rainfall levels in the region decline accordingly. This reduced level of “atmospheric moisture recycling” was simulated in the computer models used in the study.

“Drier conditions make it harder for the forest to recover and increase the flammability of the ecosystem,” Staal told the Guardian. Once rainforest has crossed the threshold and converted to an open savannah-type mix of wood and grassland, it is unlikely to revert naturally to its former state.

“It is harder to return from the ‘trap’ caused by the feedback mechanism in which the open, grassy ecosystem is more flammable, and the fires, in turn, keep the ecosystem open,” he said.

The team of researchers ran computer simulations of where forests might be expected to exist across the earth’s tropical regions, given certain climatic conditions, and looked at the minimum and maximum areas of likely forest cover.

They also looked at what was likely to happen if greenhouse gas emissions kept rising, and found that the ability of forests to grow back once trees were lost would be much reduced.

Ingo Fetzer of the Stockholm Resilience Centre, co-author of the paper, said: “We understand now that rainforests on all continents are very sensitive to global change and can rapidly lose their ability to adapt. Once gone, their recovery will take many decades to return to their original state. And given that rainforests host the majority of all global species, all this will be forever lost.”

Decent living for all does not have to cost the Earth