Cambridge is right to join the flight from fossil fuels. But divestment is just a start 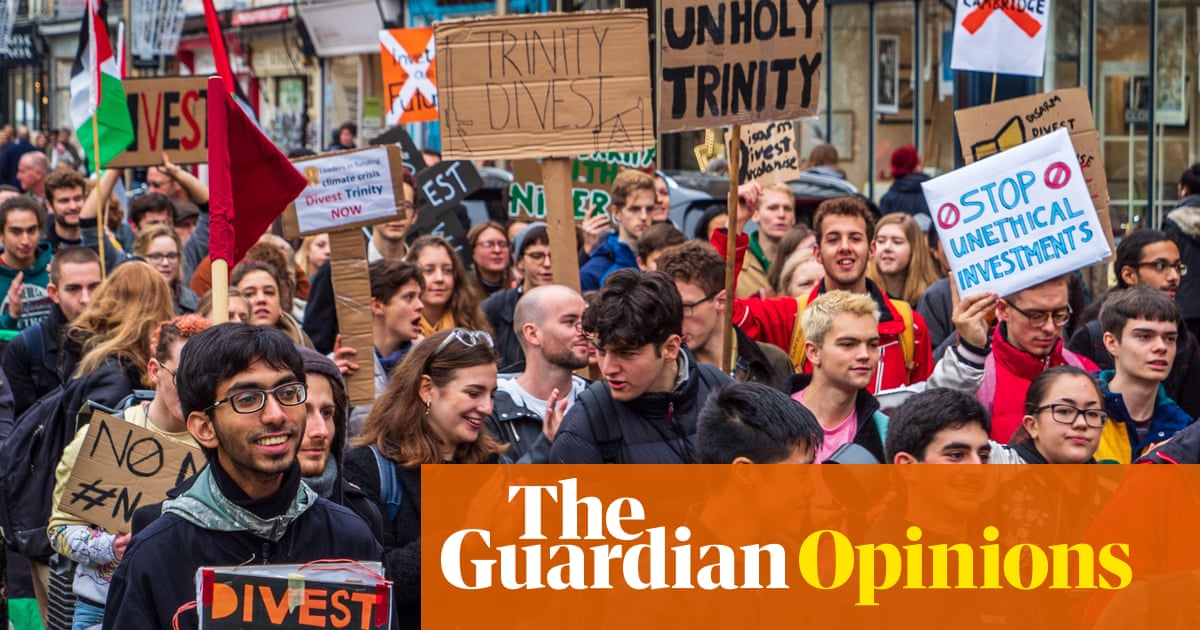 It’s been a year of considerable blows to the fossil fuel industry. Thursday’s announcement that the University of Cambridge will divest its endowment fund from fossil fuel corporations is another considerable win for campaigners, who have spent many years doggedly demanding change from an institution that – despite being a global leader in scientific research and education – has been obstinate about severing its many ties to the fossil fuel industry, including significant research funding from Shell and BP.

Of course, serious questions will doubtless be raised about why a full decade is needed to shift money out of direct fossil fuel investments, and until 2038 to arrive at a “net-zero portfolio”. And the absence of a commitment on cutting the university’s close research ties with fossil fuel companies is also sure to draw some ire.

Ultimately, however, the announcement is significant for the message it sends about the future of the fossil fuel industry. It joins a swelling chorus of voices spanning cities from Oslo to LA, more than half of UK universities, the Republic of Ireland, Norway’s $1tn sovereign wealth fund, and even – in a very limited way – BlackRock, the world’s largest asset manager. Divestment pledges worldwide now total $11tn worth of fossil fuel assets.

But as encouraging as this snowballing divestment has been to watch, the fact that even companies such as BlackRock – with its notoriously poor record on climate – are slowly coming onboard should prompt some reflection on the stage the divestment movement has reached, and whether it needs to evolve if it’s to continue pushing for the radicalism we need. We appear to have firmly entered the era that divestment campaigners have long foreseen: fossil fuels are simply no longer good investments.

This year, oil companies have written down billions in assets, and waves of bankruptcies have swept US shale gas while the North Sea oil and gas industry has shed jobs. ExxonMobil was removed from the Dow Jones industrial average after nearly a century, and five tech companies now dominate the S&P500, occupying an astonishing 20% of the index’s value compared with the measly 2.3% claimed by the entire energy sector.

Prudent financial institutions are responding by shifting investments to industries where returns are both greater and more secure in the long term. Sometimes this includes green energy, but often it simply means following the market, with freed-up cash shifting to tech and other financial companies. Even “ethical” investment strategies, so-called “ESG (environmental, social, governance)” funds, have come under fire for poor quality control, inconsistent or dubious ratings, and questionable impacts.

Divestment has played a significant part in advancing the timeline for fossil fuels’ demise. Although questions have been raised about the immediate impact of divestment on share prices, the movement has undoubtedly stigmatised investments in the fossil fuel industry. Last year, Shell admitted the divestment movement posed a “material risk” to its business model.

But there is a limit to the number of endowments and funds that represent beneficiaries who can be readily organised and are willing to submit to these demands, such as student bodies, religious communities and the constituents of progressive councils and cities. A vast amount of the financial system is deeply undemocratic, and – despite the industry’s gloomy outlook – demonstrably unresponsive to demands for an end to fossil fuel finance. Just five North American banks, for instance, have financed nearly $1tn in fossil fuels since 2016, with little sign of slowing. The question, then, is what comes next?

Divestment is a means of addressing an urgent, immediate problem: the financing of fossil fuels. But the divestment movement is fighting a war of attrition, in which its opponents – at least within the economic and political systems built by and for them – are considerably better resourced. The climate crisis is a product of those same systems, and it demands that we fight against them.

Climate and environmental breakdown are a crisis of inequality, rooted in profound imbalances in wealth and power both within and between countries. A spate of reports and letters from leading scientists have sounded the alarm on this sober reality, and warned that we will likely fail in combating the climate crisis unless we radically reduce inequality and redistribute consumption and resource use.

The divestment leader and legendary activist Bill McKibben was right when he said “money is the oxygen on which the fire of global warming burns”. But we need to be just as concerned with its distribution as we are with its flow. There’s a long way to go to “turn off the tap”, and the divestment movement is still very much needed.

But to challenge the status quo driving this crisis in the first place, the movement must challenge the immense and undemocratic structural power of the financial system, and the explosion of inequality it has supported, and not settle for greener portfolios.