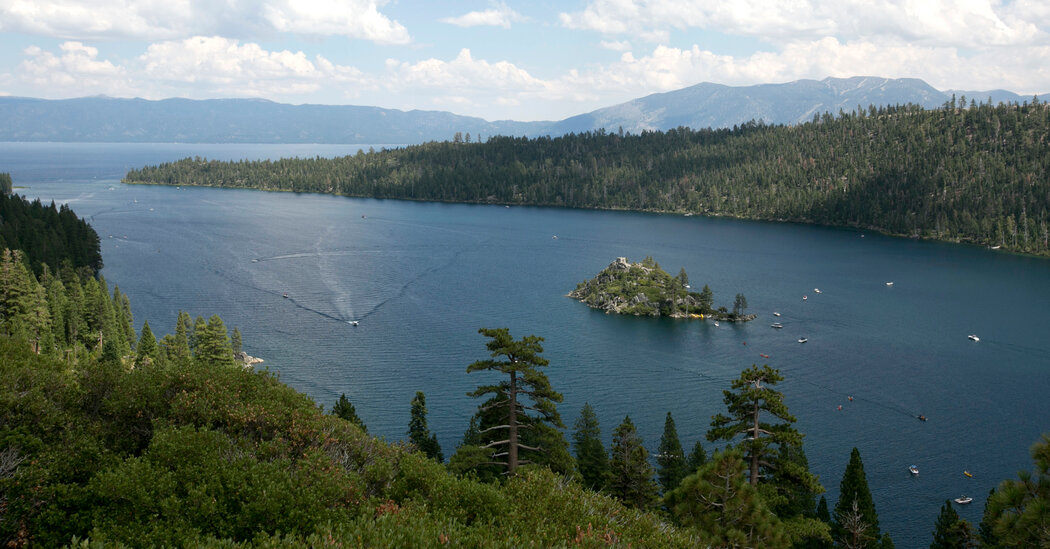 Officials said the recovery this week of Ryan Normoyle’s body, which was 1,565 feet down, was the deepest ever recorded at the lake.

The phone Mr. Normoyle used to record himself jumping into the lake also captured his location at the time, which aided in the search efforts.Credit…Rich Pedroncelli/Associated Press

In early August, Ryan Normoyle steered a rented open-bow boat into Lake Tahoe, set his phone up so he could record himself, and jumped into the cobalt-blue water.

Mr. Normoyle, a 29-year-old carpenter and outdoors enthusiast from New Jersey, surfaced and climbed into the boat. A little later, he jumped back in. That time, for reasons that are not clear, the boat was slowly moving.

Mr. Normoyle surfaced and swam toward the boat. It continued to drift away. Within two minutes, Mr. Normoyle could no longer be seen in the video recorded from the boat, a police official said.

Mr. Normoyle’s boat washed ashore on Aug. 10 in Glenbrook, Nev., on the eastern side of the large lake, according to a statement from the South Lake Tahoe Police Department. Rescue efforts began that day, lasted through the night and continued the following day. Mr. Normoyle was presumed to have drowned.

Ryan Normoyle was an outdoors enthusiast from Dumont, N.J.Credit…via the Normoyle family

Lake Tahoe, a police official said, is “exactly like an ocean.” Mr. Normoyle’s body was found on Sept. 26, over a month after he went missing, and was finally recovered on Monday.

Keith Cormican, who founded a nonprofit organization specializing in underwater recoveries, was called in to help. “I was very nervous and very stressed that I wasn’t going to be able to get this kid back up,” he said.

Mr. Normoyle’s body would slip another 15 feet deeper before officials pulled off what they say is the deepest recovery at the lake, and maybe in North America. In statements and interviews, officials described a complicated effort that challenged even experts with the best equipment.

Mr. Normoyle grew up in Dumont, N.J., less than 20 miles from Manhattan. He was “a ball of life,” Mary, his mother, said. She laughed as she recalled his crowd surfing at a wedding. “Everyone has a story about Ryan.”

He was a carpenter with a woodworking business. Also, “he was becoming an outdoor enthusiast,” she said. But the lakes nearby “are big, smooth, giant puddles.”

“I’m not sure if he knew just how treacherous Lake Tahoe is,” she said. “I certainly didn’t.” She went to Lake Tahoe a few days after her son went missing. “I couldn’t believe the size,” she said. “Huge.”

It’s longer and wider than Manhattan.

It is also deep — a maximum of 1,645 feet. Five Statues of Liberty can stand on top of one another and not pierce the surface, which would be more than a hundred feet above.

That extreme depth was one obstacle to recovering Mr. Normoyle’s body. First, searchers had to locate him.

The Douglas County Sheriff’s Office Marine Unit, the Washoe County Marine Unit and members of the Coast Guard looked for Mr. Normoyle soon after he went missing. For days they were unable to locate him. Later, a research team from the University of California, Davis joined the effort with its unmanned submarine. No success.

As the search got underway, Mr. Cormican was contacted by a member of Mr. Normoyle’s family. Though far from the scene, Mr. Cormican was familiar with Lake Tahoe. He sold rescue equipment to officials in Douglas and Washoe Counties, which abut the Nevada side of the lake. He agreed to help.

With Mr. Cormican on board, local officials agreed to dedicate personnel and equipment for an intense search, but only for four days.

Officials wanted to help, but the lake was busier than ever that season, a respite for many after isolating in summer heat. “We were bursting at the seams,” said Lt. Shannon Laney of the South Lake Tahoe police.

There were more drownings at the lake this year than in years past, he said, though he could not provide specific figures. (The lake abuts five counties in California and Nevada.) “This year was rough,” he said. At least one other person drowned in the lake the same week as Mr. Normoyle did.

Mr. Cormican flew to Lake Tahoe and joined the rescue effort on Sept. 24.

On the first day, strong winds “chased us off the lake” by noon, he recalled in a blog post. On the second day, the equipment faltered.

The group was using an Outland Technology remote operated vehicle, or R.O.V. The 40-pound device has sonar, a camera and lights and a manipulating arm that can grab objects. The sonar can detect beer cans from 150 feet away, he said.

Two 2,000-watt gasoline-powered generators, on a boat on the surface, power the device.

Neither would provide the depth they needed. But connecting them end to end would.

Combined, the cords and the R.O.V. weigh more than 300 pounds. Mr. Cormican and the crew lowered it by hand into the water. But running power through 1,700 feet of cords wasn’t efficient. They were losing about 80 percent of the power generated, they estimated.

They proceeded anyway, dragging the R.O.V. at a depth of 1,540 feet in the part of the lake where they thought Mr. Normoyle might be. The phone he had used to record himself also captured his location at the time.

Still, it took hours to locate him. When they did, he was at 1,551 feet. “He was lying on his back, facing up,” Mr. Cormican recalled. Mr. Normoyle looked the same as he would have at 100 feet, Mr. Cormican said, but “what happens is we become much, much heavier at that depth.”

Using the R.O.V.’s arm, they grabbed Mr. Normoyle’s wrist, but he slipped away. Eventually, rescuers decided to leave Mr. Normoyle and try again the following day.

On the third day, the sonar equipment from Douglas County wasn’t working, and the crew used the camera, which had a shorter range. They couldn’t find Mr. Normoyle. Rescuers left the lake again, empty-handed.

On the fourth day, two- to three-foot waves were rolling across the water, but the equipment was cooperating.

They located Mr. Normoyle within 30 minutes. The R.O.V.’s arm was able to grab him and bring him up about 1,000 feet — but he slipped away.

“So now we have no idea what depth he’s at because we drifted about 300 yards,” Mr. Cormican recalled. “Normally you would turn around and go back because it was so rough, but it was our last day.”

They repositioned the boat and resumed the search. When they found him again, he was at 1,565 feet.

“I was able to get the lasso on his arm, up near his elbow,” Mr. Cormican said.

For the next two hours, the crew pulled, by hand, the cable attached to the R.O.V. that was holding onto Mr. Normoyle.

Back in New Jersey, Mary Normoyle said she was grateful to everyone, especially Mr. Cormican. “You just realize how much love is out there.”

How to Catch Albies – On The Water