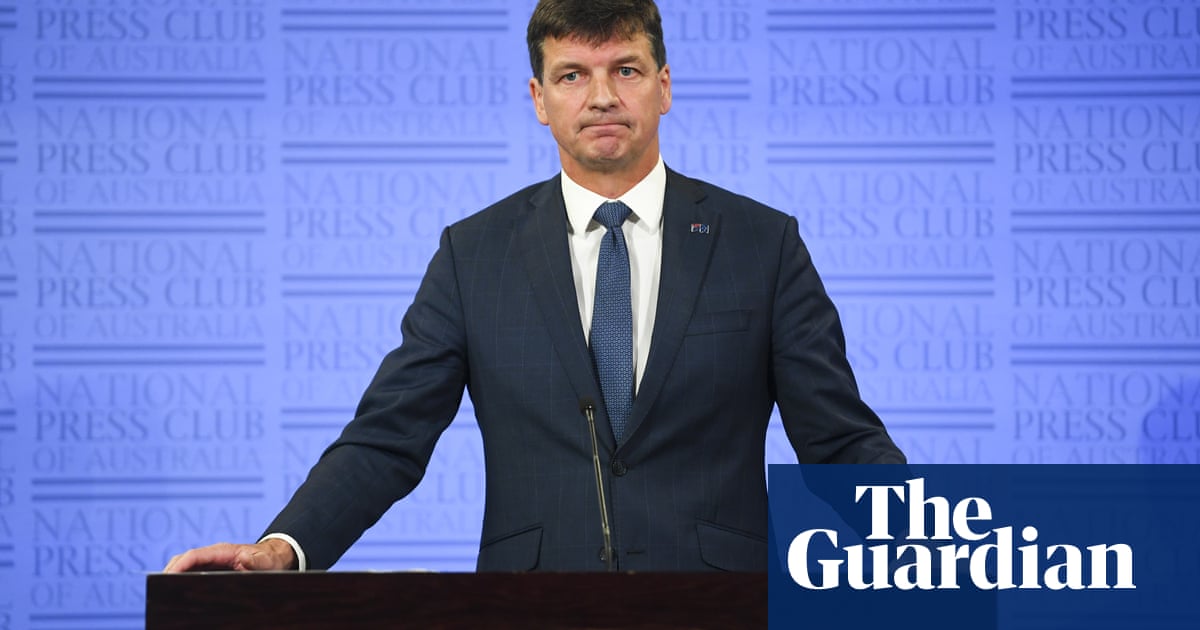 Angus Taylor says the Morrison government will develop an emissions reduction target for 2035, but likely not reveal it before the next federal election, and says his working definition of low-emissions technology is “what will move the dial”.

The energy minister on Tuesday launched the first annual statement under the government’s technology roadmap, which is the Coalition’s new policy framework for long-term emissions reduction.

The minister characterised the government’s approach, which prioritises taxpayer investments in particular technologies, with funding of $18bn over a decade, as betting on the future. “The nature of R&D portfolios is that you have to place bets. We’re placing a bet on a portfolio here.”

The former prime minister Malcolm Turnbull was scathing about the approach of his former colleagues, describing government intervention as a substitute for a market mechanism, and the Coalition’s much-vaunted gas-led recovery, as “crazy” and “mad ideology” and “bonkers”.

Turnbull told the ABC the Liberals did not generally favour market intervention as a policy approach, and he said “a green new deal, renewable-led economic stimulus, would be much more effective than focusing on what is a very expensive fuel in gas”.

Taylor launched the first report in the technology roadmap at the National Press Club on Tuesday. Under questioning, the minister told journalists the government would develop an emissions reduction target for 2035 as required under the Paris agreement “in a couple of years’ time”.

Asked why he wouldn’t reveal that target before the next federal election, which is expected late next year or early in 2022, Taylor gave no commitments, saying: “We’ll keep telling voters about what we’re doing and how well we’re doing many times between now and the next election.”

The energy minister was also asked what the government’s definition of low-emissions technology was, given it had now selected five priority technologies that would attract potentially significant taxpayer funding, including “clean” hydrogen, energy storage, “low-carbon” steel and aluminium, carbon capture and storage, and soil carbon.

Taylor was asked whether he was applying conventional benchmarks to help establish the relative merits of particular approaches. He was asked whether the government was badging the priority technologies low-emissions or clean or green based on a measurement of the emissions intensity of the preferred technology or the proportion of abatement it would deliver.

But the minister said the government’s definition wasn’t specific, it was broad. He said the definition was “what will move the dial in bringing down our emissions”.

“Bringing down emissions is the goal here,” he said.

The first discussion paper elevates the five nominated technologies for immediate support, and gives each of them what Taylor terms a “stretch goal”.

Hydrogen is badged in the roadmap as “clean”, but the report notes that “hydrogen from off-grid gas with carbon capture and storage (CCS), and coal gasification with CCS – might be the lowest-cost clean production methods in the short term, although renewable production methods will come down in cost as clean hydrogen demand grows”.

The first report also heralds significantly more investment in carbon capture and storage than the $50m flagged last week when the government signalled an overhaul of the Australian Renewable Energy Agency.

The report notes that “large-scale deployment of CCS will underpin new low-emissions industries (including hydrogen) and provide a potential decarbonisation pathway for hard-to-abate industries such as natural gas processing and cement”.

“Australian CCS projects could also play an important long-term role in storing CO₂ drawn down from the atmosphere, likely to be crucial in global efforts to meet the Paris agreement’s temperature goals,” it says.

Other technologies, like virtual power plants, next -generation solar PV, energy efficiency, demand response and the abatement of fugitive methane – which is a byproduct of gas extraction and a significant driver of emissions growth in Australia – have been bumped down the government’s list of priorities in this first report.

The Morrison government is continuing to resist pressure to sign up to a target of net zero emissions by 2050 – a concrete and increasingly uncontroversial abatement target that is consistent with the obligations the government adopted under the Paris agreement.

The shadow climate change minister, Mark Butler, told reporters there were things to be welcomed in the government’s roadmap “but they need alongside it an investment set of rules that give investors confidence to actually make this technology a reality, otherwise it will just be another report that describes the technologies that are available around the world but sees nothing change on the ground”.

The Clean Energy Council’s chief executive, Kane Thornton, said the government was right to prioritise clean hydrogen, energy storage and green steel, “however, it is a missed opportunity not to prioritise the increased and better use of Australia’s wind and solar resources”.

The gas industry, represented by the Australian Petroleum Production and Exploration Association, said the government’s decision to including carbon capture and storage and hydrogen was important recognition that these technologies can achieve large-scale abatement while providing significant economic opportunity.

The Ai Group chief executive, Innes Willox, said the roadmap was a good start, but the government needed to bear in mind that “other clean technologies have large potential too, from energy efficiency and electrification to ongoing innovation in renewables”.

Willox said it would be important to keep bodies like Arena and the Clean Energy Finance Corporation “open to good opportunities wherever they may be found, and to keep iterating the technology strategy as the landscape changes”.