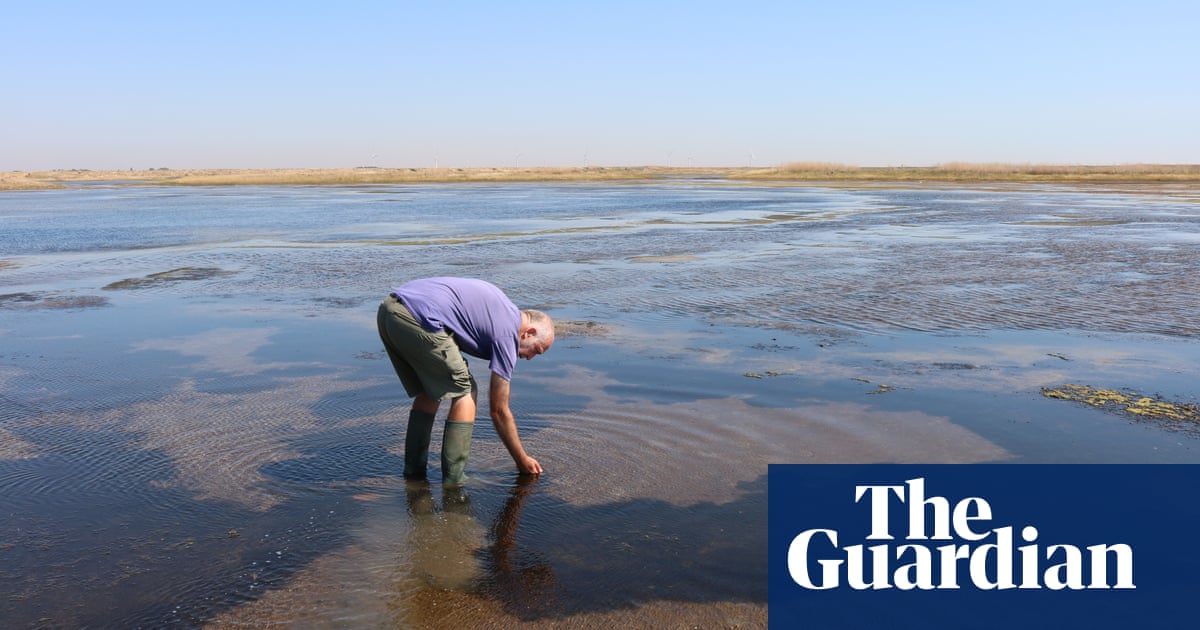 It is the third hottest day on record in the UK and the cool saline mud oozing through my toes provides welcome relief from the beating sun. I am standing barefoot in a shallow pool in Europe’s largest coastal habitat restoration project, Wallasea Island in Essex. The 670-hectare (1,656-acre) expanse of salt marshes, lagoons and mudflats was formed using more than 3m tonnes of London clay excavated from the Crossrail tunnel network, almost half of the waste material from the entire project.

In the heat, crowds of flamingos would not feel out of place, but the sweltering temperature is a gnawing reminder of how rising sea levels and the climate crisis will threaten the UK’s coastline. The problem is so grave that one Dutch government scientist has even proposed a 295-mile (475km) dam of the North Sea to protect large parts of western Europe.

But projects such as Wallasea Island Wild Coast are a far less expensive, natural alternative to managing the rising water. Salt marshes are natural buffers against the wrath of the sea – especially in storm surge conditions – dramatically reducing wave height and soil erosion, as mangrove swamps do in tropical regions. Salt marshes around the UK provide £1bn worth of coastal flood defences, according to one government report. Yet salt marshes themselves are also threatened if they cannot rise with the sea, as is the wildlife they support.

At Wallasea Island, Malcolm Ausden, a principal ecologist with the Royal Society for the Protection of Birds (RSPB), is sorting through the saline sludge in his green wellies. “Here’s one,” he says, pointing out a bright red non-biting midge larva in his sieve. While only a limited number of species thrive in the multicoloured mud, the shrimps, cockles, insect larvae and young fish species found in the water support thousands of birds throughout the year.

Salt marshes and mudflats sequester large quantities of carbon, so that’s helpful in terms of the climate crisis

Avocets and little egrets wade in the shallows of the 22 lagoons and 67 islands in the project, which has been constructed on reclaimed farmland. Gulls, terns, plovers, buntings and many other species thrive in the Martian, treeless landscape, an unlucky few picked off by peregrine falcons, marsh harriers and kestrels. Hares sprint for cover in the grass meadows that border lagoons.

As we continue our walk around the reserve, we stop at a Scandinavian-style shelter, close to the final resting place of Charles Darwin’s Beagle, which lies under the mud in the River Roach. Boats tack past as a handful of seals bask on the opposite bank, conspicuously orange from the iron oxide in the coastal mud. On the southern flank of the nature reserve, a crumbling sea wall holds back the estuary from the protected area. The RSPB controls the levels of the lagoons inside the reserve using a system of sluices. The long-term challenge is rising water levels that might one day overwhelm the sea wall.

“If these old sea walls failed, it would massively increase the volume of water flowing in and out of the estuary on each tide, and this would put additional pressure on other sections of sea walls. The wetland creation scheme at Wallasea prevents this from happening, and so helps provide a long-term flood defence solution for the whole estuary,” Ausden says, explaining the importance of clawing back some of the thousands of hectares of intertidal salt marsh that once lined the Essex coast. These ecosystems are already part of any serious chef’s kitchen: Maldon sea salt is produced further up the coast.

You cannot put a sea wall everywhere. The other option is to try and live with sea level rise

The nature reserve at Wallasea Island is still young, with groundwork on shaping the excavated material from the 26 miles of tunnel for the Crossrail project having only been completed in 2015. A 180-metre temporary jetty was built at the site to receive 2,400 shiploads of soil and load it on to an 800-metre conveyor system to distribute around the reserve.

By 2025, the scheme hopes to have created 150 hectares of mudflats, 90 hectares of salt marsh and 165 hectares of shallow saline lagoons that are controlled by barriers to regulate the tidal flow in and out of the protected area. Yet, while the Wallasea Island project is a leading example of a nature-based solution with active human management of the landscape, the scale of the challenge in the rest of the UK is daunting.

Salt marshes are found along the Bristol Channel, the Wash, the Thames, the Firth of Forth and other big estuaries and are a vital transitional habitat between the land and ocean. But if they cannot rise at the same rate as the seas, they could disappear, making tidal marshes among the Earth’s most vulnerable ecosystems. In 2018, a study warned that marshland in south-east England could disappear by 2040 if the climate crisis was allowed to continue. If the world sticks to the Paris agreement, the ecosystems survive.

Prof Benjamin Horton, director of the Earth Observatory of Singapore and lead author of the 2018paper, said the tipping point appeared to be when the annual rise in sea level reaches 6-7mm, after which salt marshes will drown.

“They may try and go landward. But if you’ve got urban squeeze, there are roads and agricultural lands and ditches and dikes, they’ve got nowhere to go,” Horton explains, detailing the huge future cost of tidal defences to cities such as London and Singapore.

“You cannot put a sea wall everywhere. The other option is to try and live with sea level rise. So this is where the marshes come in, they protect from erosion, they’ll absorb coastal waves.

“You have areas where you let the water in and you live with it – Amsterdam, Venice; there are many, many such examples of that. And then the third one is retreat. You just retreat inland, which for an island nation like the UK is not what you want to do.”

Find more age of extinction coverage here, and follow biodiversity reporters Phoebe Weston and Patrick Greenfield on Twitter for all the latest news and features

How SUVs conquered the world – at the expense of its climate