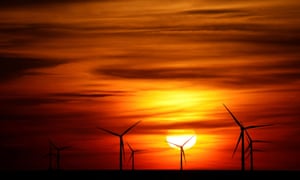 BP has taken its first major step into the offshore wind industry with the purchase of a $1.1bn (£850m) stake in two US offshore wind projects being developed by Norwegian state oil company Equinor.

The oil companies will also team up to develop more windfarms off the coast of the US after agreeing a strategic partnership to help corner the fast-growing market for offshore wind.

Bernard Looney, BP’s chief executive, described the deal as “an important early step” in the delivery of BP’s new climate ambitions, which include a goal to develop 50GW of renewable energy by 2030.

“It will play a vital role in allowing us to deliver our aim of rapidly scaling up our renewable energy capacity, and in doing so help deliver the energy the world wants and needs,” he said.

BP’s move into the offshore wind industry, which is currently growing at about 20% a year, has emerged after the oil company unveiled new plans to shift away from fossil fuels and towards low carbon energy within the next decade.

The company set out plans last month to grow its low-carbon investments eightfold by 2025, and tenfold by 2030, while cutting its fossil fuel output by 40% from 2019 levels. It plans to give further details on how it plans to make the shift from “oil major” to “energy company” in a series of investor presentations scheduled for early next week.

Equinor, formerly known as Statoil, began its own shift towards cleaner energy sources around a decade ago by beginning to develop offshore wind projects. It is currently developing the Dogger Bank project off the Yorkshire coast alongside SSE which will be the largest windfarm in the world once it begins generating power in 2023.

Equinor expects to accelerate its existing goal to grow its renewable energy portfolio to between 4 to 6GW by 2026 and 12GW to 16GW by 2035.

Eldar Sætre, the company’s chief executive, said the new partnership “underlines both companies’ strong commitment to accelerate the energy transition”, and will use their combined skills to “grow a profitable offshore wind business together in the US”.

The partnership will lean on BP’s experience as a major energy trader and Equinor’s track-record in developing offshore wind projects.

Under the deal, BP will take a 50% stake in Equinor’s Beacon windfarm which is in an early stage of development off the Nantucket coast, and in the Empire windfarm off the coast of Long Island which is due to begin generating clean electricity by the mid-2020s. The windfarms are expected to generate enough electricity to power over 2m US homes.

‘It was a feeling of terror: when will the water stop?’: Britain’s flood victims, six months on

For all its green talk, the IEA still gives comfort to oil and gas producers