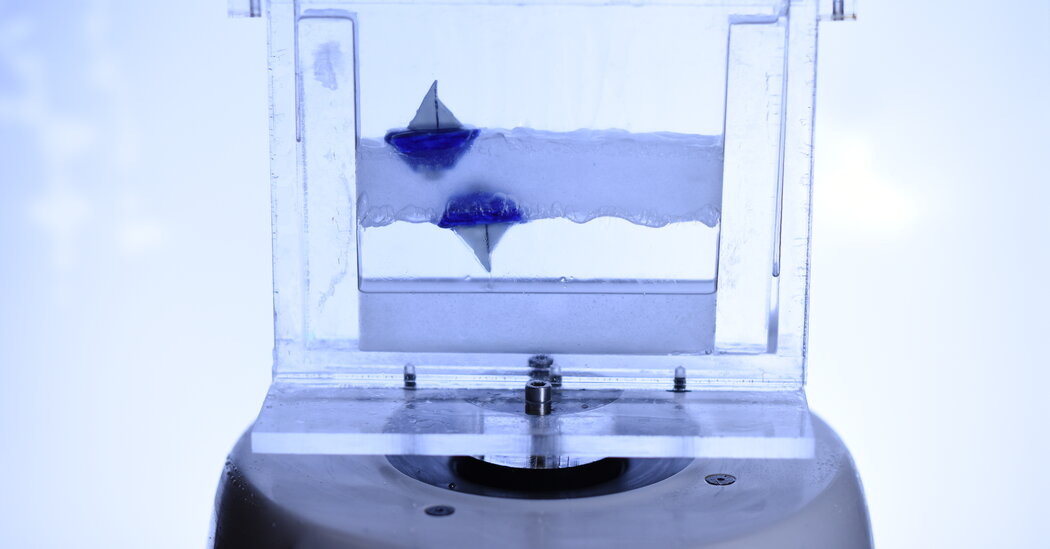 The liquid levitates, and a boat floats along its bottom side. 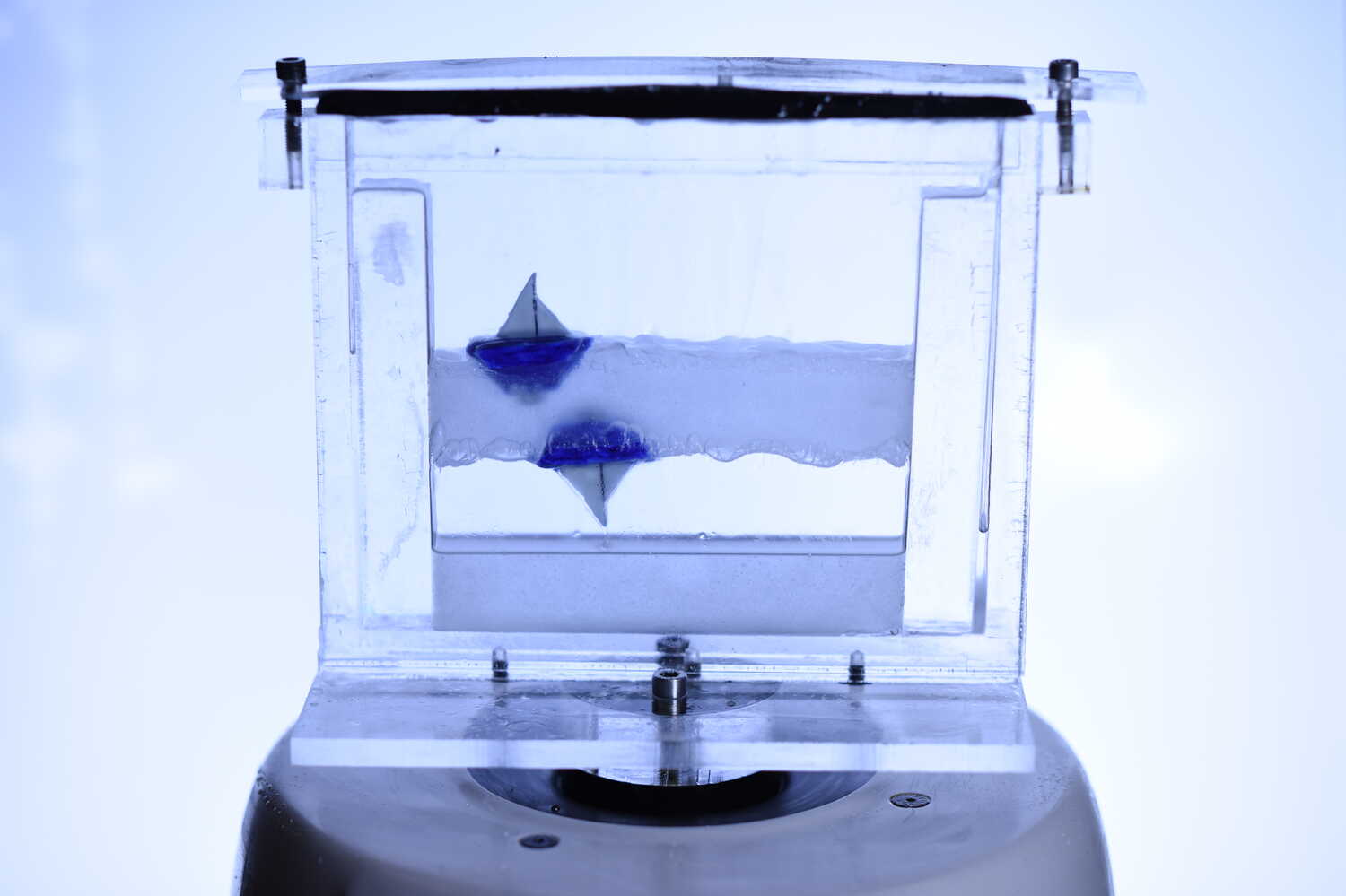 Sail beneath a levitating sea — upside down?

Through a couple of sleights of science, a team of French scientists showed that not only could they make a layer of viscous liquid hover in midair but that a little toy boat would also bob on the bottom side of the liquid layer in the same way that one would normally float on top.

“That was a fun experiment,” said Emmanuel Fort, a professor at France’s ESPCI Paris and an author of a paper published this week in the journal Nature that describes this seemingly impossible feat. “Everything worked well. And I’m still amazed by the results.”

Usually, a denser liquid sinks to the bottom. That’s why oil floats on water. Even if you first pour a layer of oil into a container and then carefully add water on top, the heavier water will start dripping through the oil, forming tentacles that reach the bottom. Soon the water will settle at the bottom beneath the oil.

Dr. Fort’s levitating liquid research started when he heard a talk about Kapitza’s pendulum, named after Pyotr Kapitsa, a Russian physicist who in 1951 described how, if the pendulum were vibrated up and down at the correct frequency, it would remain in the upright configuration indefinitely.

A spark of inspiration came to Dr. Fort: “Instead of having some pendulum upside down, we can maybe have some liquid layer upside down.”

In other words, they wanted to create a layer of liquid on top of air.

That does not work with a layer of water, which easily ripples and becomes unstable. But it does work with glycerol and silicon oil, which are thicker than water. The higher viscosity suppresses ripples.

The vibrations, about 100 cycles a second, caused bubbles injected into the liquid to be pushed downward, forming an air cushion below the levitating liquid. The vibrations also generated a steady rhythm of compressions that kept the levitating liquid intact. When a drip started forming, the upward force of the air nudged the drip back into the layer, keeping it intact.

And quite of bit of liquid can be levitated this way. The researchers demonstrated they could lift about half a quart, and the liquid could spread about eight inches wide.

In principle, they could have done much more. “There’s no limit; you just have to shake more,” Dr. Fort said.

But the bigger shaking platforms cost a lot more, and this was peripheral to Dr. Fort’s usual work: biomedical imaging. He has also looked at how droplets and waves in water can serve as models for certain aspects of quantum mechanics.

A search through the scientific literature revealed levitating liquids with vibrations was not new knowledge; other scientists had discovered the phenomenon decades ago.

But Dr. Fort’s team identified something unusual: that objects could float along that bottom layer of a levitating liquid.

Because of the weight of the liquid, the air underneath the levitating layer is denser, and that denser air is pushing the boat up into the liquid, counteracting the downward force of gravity.

The net effect is that it floats upside down.

“The global vibration helps you to stabilize this equilibrium position,” Dr. Fort said. “It’s not intuitive.”

Indeed, the scientists were surprised, too. “We were thinking that it would simply fall,” Dr. Fort said.

The scientists initially used small round beads for their research, but they then started using their 3-D printer for other shapes of plastic to float upside down. That included ducks and frogs. Those all floated upside down on the bottom side of the levitating liquid.

“But I think the boat was awesome,” Dr. Fort said. 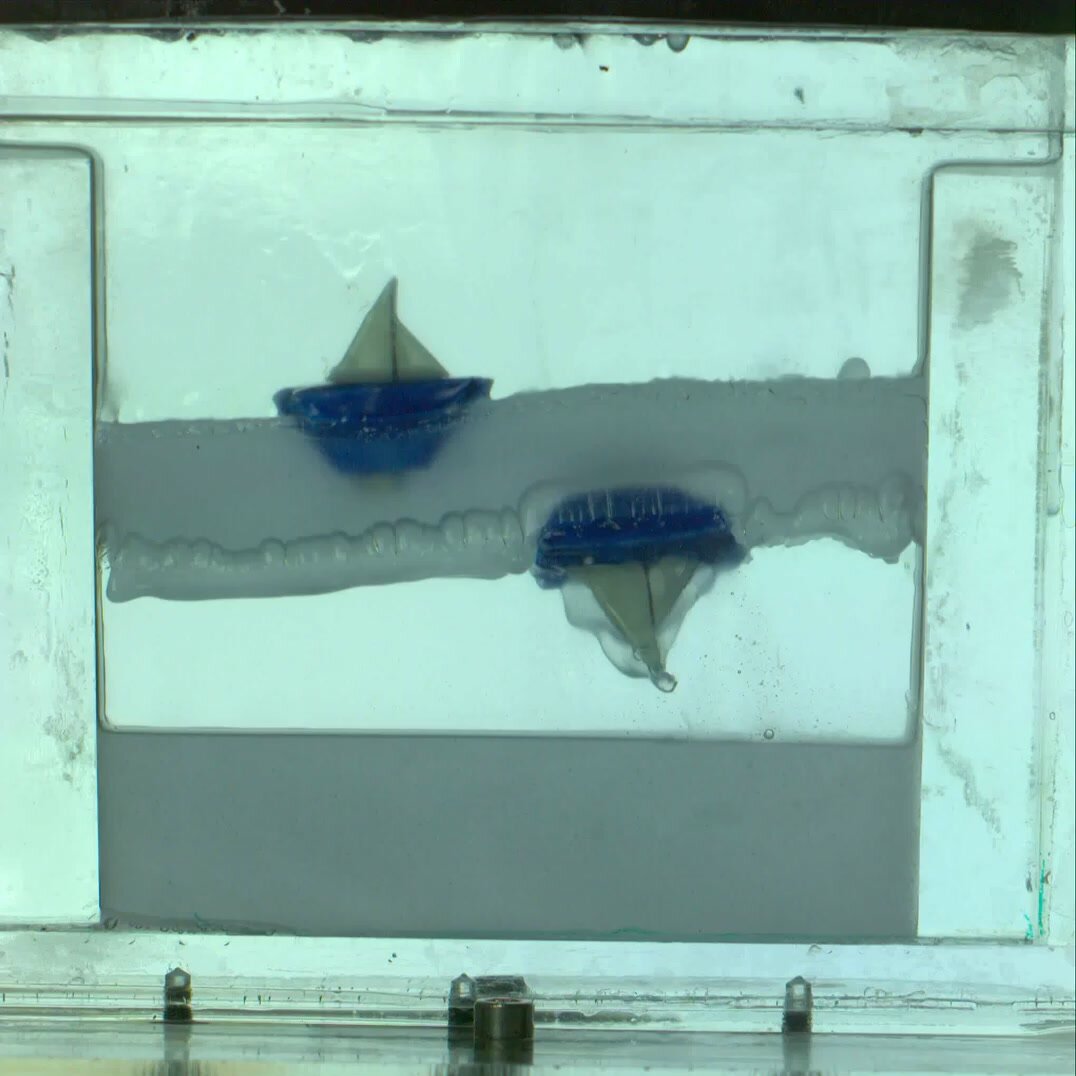 While the levitation of the liquid was known, the researchers showed that objects could float along its underside, too. Video by Fort et al.

In an accompanying commentary, Vladislav Sorokin of the University of Auckland in New Zealand and Iliya I. Blekhman of the Russian Academy of Science wrote that the research “suggests that many remarkable phenomena arising in vibrating mechanical systems are yet to be revealed and explained, particularly at interfaces between gases and fluids.”

Dr. Fort said that the research could have practical applications in the mixing of liquids and solids and possibly unmixing them back into separate components.

People who came to the laboratory and saw the experiment generally had two reactions, Dr. Fort said. One was to not believe it, that it was some sort of trick.

But others, with a more artistic point of view, compared it to poetry.

“Indeed when you see these boats, it’s a bit like fantasy,” Dr. Fort said. “That was also a very nice part outside of the narrow scope of science.”

Environmental News Network – Connecting to the Sḵwálwen Through the Land

With Every Stroke, Gaining Confidence In and Out of the Water