A forum for female voices in international security 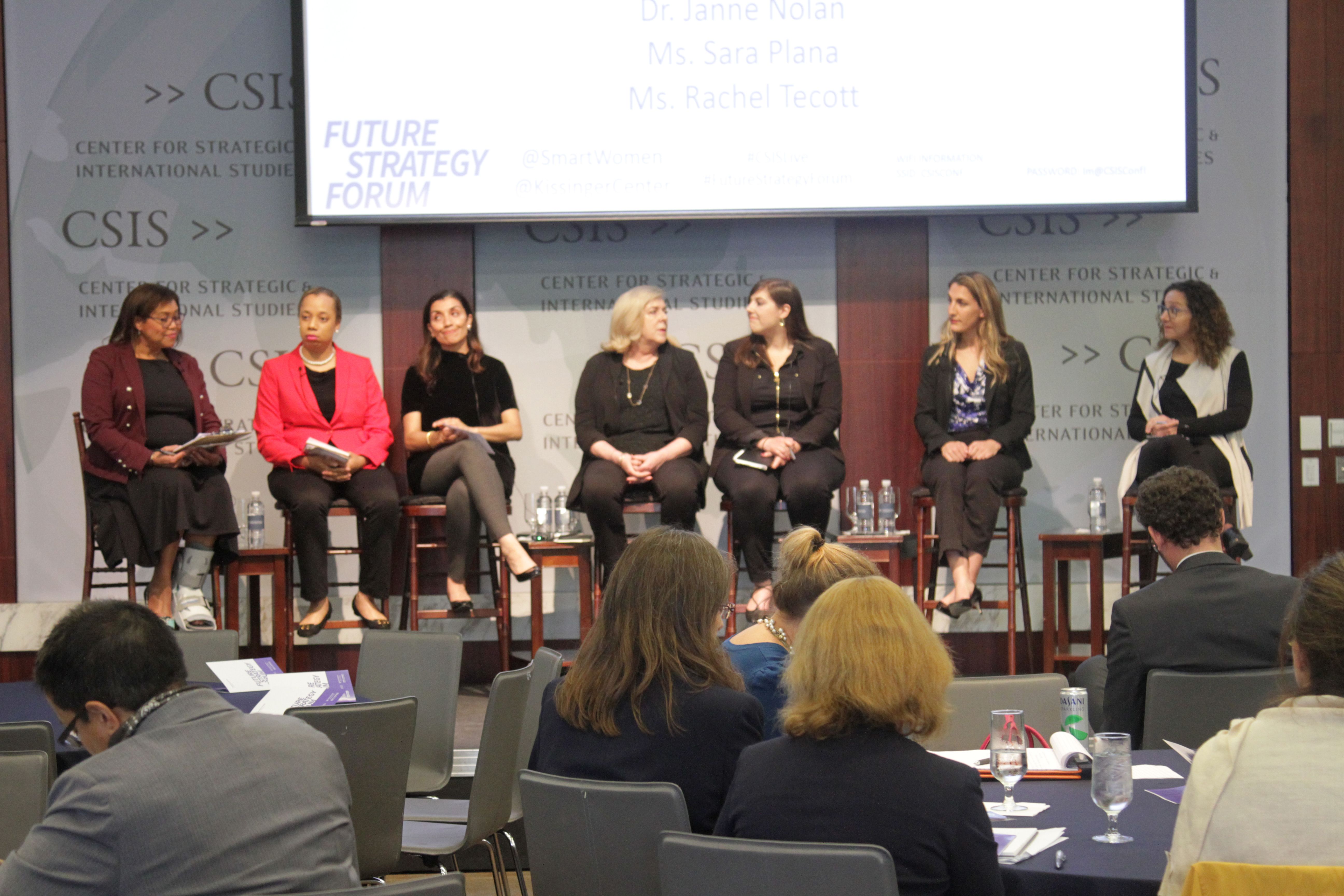 “Our field has traditionally been male-dominated, and many women in security studies today still find themselves in rooms of mostly men,” says Sara Plana, a fifth-year doctoral candidate in the MIT Department of Political Science. Women pursuing careers in security studies — especially women of color — confront greater challenges than men in publishing research and scoring coveted public policy or teaching positions, she notes.

These longstanding institutional barriers to women have proven dauntingly resistant to change. But recently, Plana and Rachel Tecott, also a fifth-year doctoral candidate in political science, came up with a plan to address the issue.

In 2018, they launched the Future Strategy Forum (FSF), an initiative amplifying the expertise of women scholars and practitioners in international security while creating opportunities for connection. At a conference held each spring in Washington, all-women panels and keynote speakers discuss substantive research organized around specific themes.

Sponsored by the Center for Strategic and International Studies (CSIS) and the Henry A. Kissinger Center for Global Affairs at Johns Hopkins School of Advanced International Studies (SAIS), with support from the Bridging the Gap Project and MIT’s Security Studies Program, the forum also brings graduate students to the nation’s capital for a day of cutting-edge presentations.

“Before the FSF I’d never been to an event about international security where all the speakers are women,” says Tecott, who is writing her dissertation on U.S. efforts to build partner militaries. “It’s a powerful experience for an audience to hear all-women panels discuss the rise of China, economic statecraft, or military technology. Eventually, we hope it’s not such a novelty.”

“We have multiple goals with the forum,” says Plana, whose PhD research investigates the ways that states sponsoring nonstate armed groups try to control the behavior of these groups. “We want to connect scholars and practitioners who wouldn’t otherwise be speaking to each other, a lateral kind of network, and also vertically foster mentorship of women graduate students eager to learn about career paths in policy and academia.”

The Future Strategy Forum emerged from the efforts of Plana and Tecott as co-chairs of a Boston-based organization of graduate students, Women in International Politics and Security. This group, funded by the MIT Center for International Studies and Harvard University’s Kennedy School of Government, “brings women together to workshop each other’s research, address issues facing women in our field such as publishing bias, or specific difficulties conducting fieldwork,” says Tecott. “It’s a space where women can lift each other up.”

The group, which had limited resources, hosted meetings in Boston to which they invited women in the field of international relations from around the country, including D.C.-based security practitioners. But Tecott and Plana realized they could accomplish more by inverting the concept:

“We were spitballing, and thought it might work better in terms of expenses to bring our membership down to D.C. to meet a bunch of women experts at one time, rather than bringing individuals up here,” says Plana.

“We saw that it would be possible not only to bridge the academic-to-policy divide, but also to incorporate junior and senior voices, as well as diverse perspectives from around the country,” says Tecott. “That kind of cross-pollination makes for more creative conversations.”

Plana and Tecott broached their idea to Kathleen H. Hicks ’10 PhD in political science, director of the International Security Program at CSIS.

“After she heard what we were envisioning, Dr. Hicks told us to dream bigger,” recalls Tecott. Hicks committed CSIS funds, and connected with Francis J. Gavin, director of the Kissinger Center for Global Affairs and a former MIT political science professor, who offered additional support. Together with their new partners, they began planning their inaugural conference for spring 2018.

Three years later, “the conference has really taken off,” says Plana. “With our partners we’ve been able to put on a professional conference that’s hosted more than 150 people, with more than 20 panelists each year.”

The organizers continue to experiment with different formats and offerings to advance the initiative’s central goals. In the first year, for instance, one panel devoted to bridging the academic and policy gap brought in women with PhDs who had moved from academia into the policy world. The second year of the forum provided subsidies to 25 PhD students to attend. During the day’s lunch session, tables hosted a mix of audience members and invited speakers with formidable credentials in such places as the State and Defense departments, the FBI, and major research universities. “This democratized access to really important women practitioners and scholars,” says Plana.

Plana and Tecott have passed the baton this year to new leadership on the MIT side: Eleanor Freund, a second-year PhD student whose current research examines China’s votes in the UN Security Council to illuminate that nation’s concerns about international interference in state sovereignty. Together with Plana and Tecott, Freund is helping institutionalize the role of graduate students at MIT and other research universities in planning and executing the conference.

The COVID-19 pandemic altered the format and theme of this year’s forum; the original 2020 idea was to be The Future of Technology and National Security, and will happen next year. In spite of this curveball, the organizers believe their work will continue to yield dividends for women in the field, including themselves.

“I was not expecting how much this conference would resonate with people, and how much they appreciated the opportunities to connect with so many of the top women in the field,” says Plana. “This is true of my own experience: Over the past few years, the networks I built through this forum have directly helped my research in so many surprising ways.”

“We’re building on the work of so many women before us, and are part of a much larger movement promoting women in this space,” says Tecott. “By bringing in perspectives that might once have been overlooked, we’re getting important ideas out there. That’s what FSF is about — advancing international security by making sure that the best ideas have a chance to be heard.”

The changing world of work

Protecting seafarers and the global supply chain during Covid-19