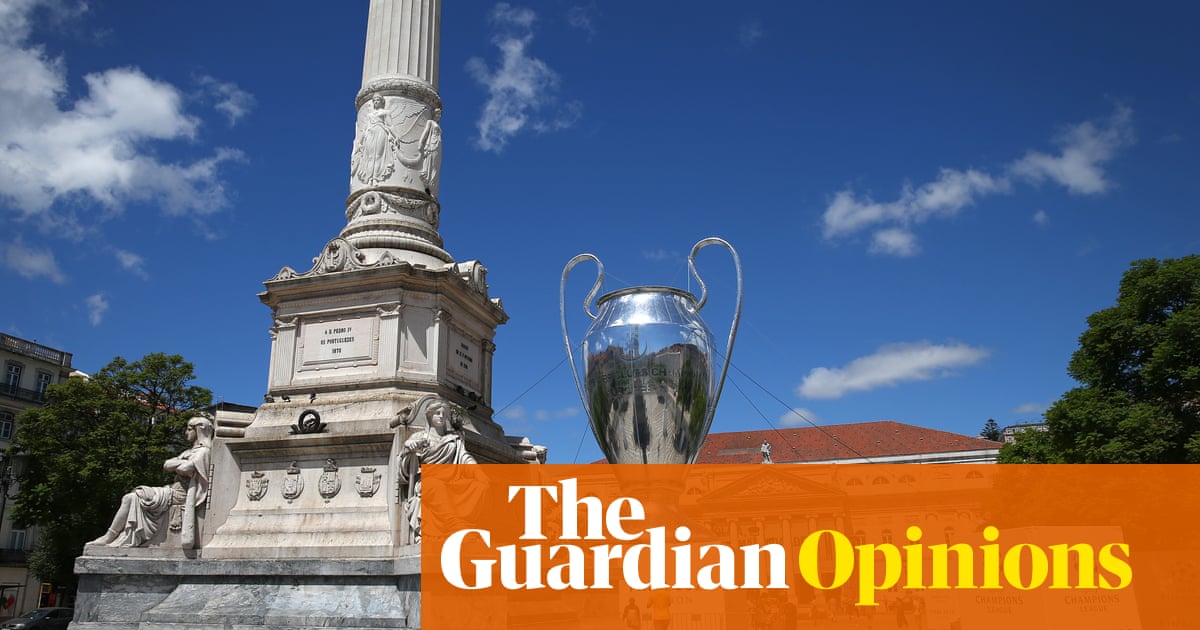 Like everything else in 2020, the football season in Europe has been unusual. The Champions League final this Sunday, its traditional climax, is three months late. All eight quarter-finalists have been quarantined in Lisbon. What normally are two-legged home-and-away ties have been reduced to one match played in an eerie, empty and neutral stadium. Even games of the calibre of Bayern Munich’s 8-2 evisceration of Barcelona were rendered hollow and bizarre.

Yet, as with the wider impacts of the world’s lockdowns, this has been good news for football’s carbon emissions. Last year, the World Land Trust estimated that the Champions League final alone would generate nearly 10,000 tonnes of carbon. In the absence of a crowd, it is estimated that this year’s will be under 3,000 tonnes. Uefa promises that all will be back to normal for 2021, and who could not long for the return of crowds and their electric energies? But the climate crisis will still be with us.

In any case, there is no going back to normal. Football is going to feel the impact of the climate emergency very soon. More very hot weather is going to be a problem for spectators and players alike. The physiology of overheating is complex, but once it starts hitting 35C, and you are playing football, it’s all bad news. Memory, hand-eye coordination and concentration all start to suffer, then there are heat cramps, heat exhaustion and heatstroke. There are going to be a lot more days like that in the global football calendar in the next few decades. Pre-season training in the Mediterranean is becoming physiologically dangerous. Grassroots and informal play in great swaths of the global south will become intolerable.

In northern Europe the rising number of extreme weather events will also disrupt the game. In 2015, torrential rain accompanying Storm Desmond saw Carlisle United’s Brunton Park flooded and the club forced out of the stadium for seven weeks, at considerable financial cost. Expect more of this.

Using mapping technology, combined with climate change models, we can see that by 2050 Werder Bremen’s Weserstadion and Bordeaux’s Matmut Atlantique will be flooded annually. In England, 23 of the 92 league grounds can expect partial or total annual flooding of their stadiums by 2050: four in the Premier League, four in the Championship, eight in League One and seven in League Two – including Grimsby Town’s Blundell Park, which will sit beneath the new North Sea. Similar fates await estuarine and coastal stadiums everywhere.

If the football world is going to mitigate the worst of these risks, it needs, like everything else, to make itself carbon zero, and preferably in the next decade. What might that look like? First, as most studies show that 70% of football’s emissions come from spectator travel, and we still want a crowd – without which the whole show is barren – these need to be minimised and offset. Uefa has led the way on this, committing to offsetting aviation emissions from Euro 2020 – now postponed to next year – out of its own budget by investing in reforestation projects. Uefa should also extend the programme to next year’s Champions League – and such practices simply must become the norm for all commercial football.

Second, football needs to end its reliance on hydrocarbon sponsorship. The final stages of the Champions League have been particularly soaked in fossil fuels, with Gazprom sponsoring Uefa, Emirates airline backing Lyon, and PSG owned by Qatar (and Qatar Airways a partner of Bayern Munich). Third, every football association, broadcaster, sponsor and club needs to commit to carbon-zero practice by 2030, taking their lead from the best in the sector: Forest Green Rovers are UN-certified carbon zero, with vegan food, a new, wooden stadium and 100% renewable energy use; in the Bundesliga many clubs are massively reducing waste, installing solar panels and subsidising public transport.

Self-interest and virtue might, for once, overlap. Football has its own reasons for going carbon zero, but its efforts are just a fraction of what we must do collectively. Its catalytic potential, however, is immense. Few human practices offer such an extraordinarily large, global and socially diverse constituency as those playing and following football. Making a carbon-zero world the commonsense priority of the football world would make a huge and very visible contribution to making it the commonsense priority of all politics.

Then there is the question of hope, without which no politics of climate action is possible. This is in short supply. But football, from the street to the stadium, generates hope: that no cause is lost until the game is actually at an end; a past that tells us miraculous recoveries and rallies are possible; that human beings, collectively, have the heart and the wit, when the time comes, to make it happen. That is a precious set of cultural treasures to hold in trust for the world. If football is ready to adopt radical change in the field of climate action, it might be able to offer them, in all good faith, to humanity. And then you just never know.

• David Goldblatt is the author of The Age Of Football: The Global Game In The Twenty-first Century (Macmillan). This article is based on his latest pamphlet with the Rapid Transit Alliance called Playing Against the Clock: Global, Sport, Climate Change and the Case for Rapid Change

‘Hijacked by anxiety’: how climate dread is hindering climate action