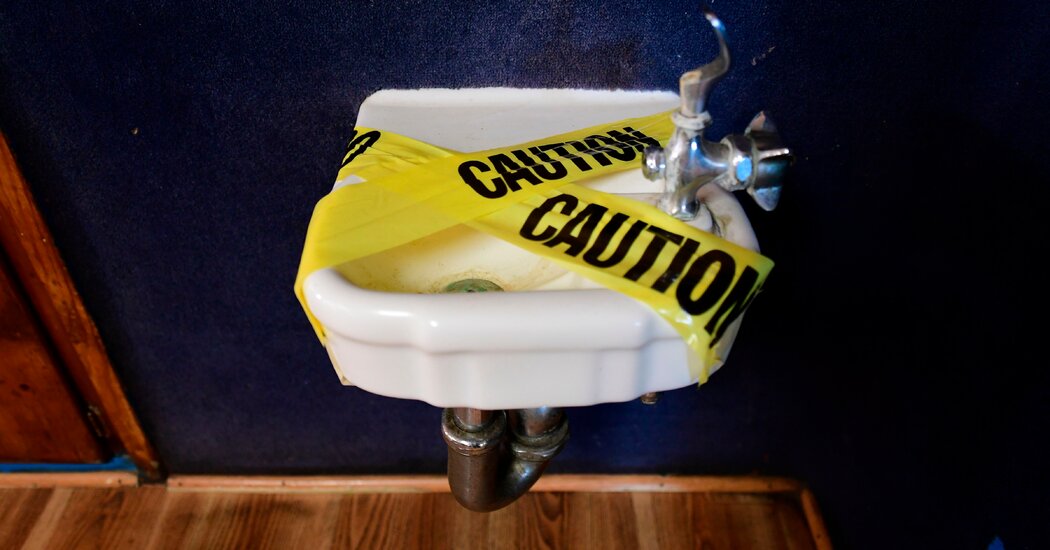 A number of schools found the bacteria that causes Legionnaire’s disease in their water, and experts say more should expect to see it.

Experts worry that water was left to stagnate in plumbing during lockdown, and that schools don’t have plans or effective guidance for dealing with the effects of prolonged shutdowns.Credit…Frederic J. Brown/Agence France-Presse — Getty Images

The new coronavirus is not the only illness that teachers, students, parents and staff will have to worry about as some schools attempt to reopen this fall. Legionella could lurk in the water supplies of school buildings, and some measures to keep people in schools safe from coronavirus may even increase risks from deadly illnesses caused by the bacteria.

“It is unusual to hear about nine schools in a one-week period having a detection of Legionella,” said Andrew Whelton, an associate professor of civil, environmental and ecological engineering at Purdue University in Indiana who has been studying the effects of lockdown on water systems. He said that more schools may be testing for the bacteria than in a typical year.

Legionella, usually Legionella pneumophila, is the bacteria that causes Legionnaires’ disease, a respiratory condition. It can form in stagnant water and then disperse through the air and be inhaled when, for example, a shower or tap is turned on. It can be fatal in one in 10 cases, according to the Centers for Disease Control and Prevention. Although young children are less at risk of Legionnaires’, older students, adults and people with compromised immune systems are vulnerable.

To protect against the spread of coronavirus, many school buildings have been unoccupied since March. Their bathrooms, cafeterias and sports facilities have gone unused. While low occupancy in schools is typical during summer breaks, many are open for summer school and other activities. Experts worry that water was left to stagnate in plumbing during lockdown, and that schools don’t have plans or effective guidance from health authorities for dealing with the effects of prolonged shutdowns.

“Schools generally do not have a water management plan,” Dr. Whelton said. “There’s a myth that most do. They don’t in my experience.”

Precautions that schools may take to limit coronavirus infection risk could also add to Legionella concerns. For instance, some schools are turning off drinking fountains to prevent oral spread of the virus, or closing off every other sink to ensure social distancing. Some sports facilities also remain closed because of the risk to student athletes and coaches.

But stagnant water in unused drinking fountains or sink plumbing could be a good reservoir in which the bacteria could grow. And shower heads like those found in locker rooms are common places for Legionella to proliferate. Facilities managers will need to be on guard for the bacteria in school athletics complexes if sports start again next spring. And Dr. Whelton said that many people responsible for managing buildings’ water systems, “had no idea you can acquire Legionella from showers and toilets.”

The C.D.C. has issued guidelines for business and building reopenings after coronavirus lockdowns. A spokeswoman from the agency said that its guidelines are “applicable to all types of buildings,” including schools. But the vagueness of many of the guidelines, according to Dr. Whelton, means that schools can do as much or as little of general preventive steps and claim to be compliant.

The usual way to guard against Legionella growth is a process known as flushing. Bringing fresh water into the system keeps a small dose of chlorine in the system, which limits the bacteria’s ability to propagate. But flushing has to be done regularly and for all outlets. That means running every tap, shower and toilet.

One of the schools in Ohio that found the bacteria, Englewood Elementary in the Northmont City Schools district outside of Dayton, began flushing its system in July. When a water management company discovered Legionella last week, they shut down all the water in the building and sent a high level of chlorine through the system. A spokeswoman from the district said that they are continuing to test the water to ensure its safety.

The only way to tell if the flushing is effective is to test the water. Flushing once does not get rid of Legionella if it is present. Milton Union High School in Ohio began testing their water in late July. They found that after 72 hours the chlorine level had dropped to zero. They flushed again and when they tested 24 hours later it was back again to zero. They tested the water and found Legionella.

The latest on how schools are reopening amid the pandemic.

Caitlin Proctor, a postdoctoral fellow at Purdue who has been studying Legionella during lockdown, said that despite the use of chlorine, the bacteria’s biofilms can protect some of them from disappearing completely. “They can proliferate again once that disinfectant dissipates.”

Officials of the Fox Chapel Area School District in a Pittsburgh suburb, which also detected the bacteria in multiple schools, said in an email to parents that they were sending high-temperature water through the system. This process, known as thermal shock, was proposed by county health authorities as another means of killing off the bacteria. However, some industry groups question the effectiveness of thermal shock for stopping Legionella.

Some schools do not have the budget to test for Legionella and other waterborne risks. But even those schools that do are encountering a lack of authoritative advice. Many, for example, test their water directly after flushing. Because the water is fresh, the Legionella will not show up, rendering the test ineffective.

“You’re not supposed to measure immediately after you flush, but that’s not so clear in the guidance,” said Michèle Prévost, a civil engineering professor at Polytechnique Montreal, who has worked on studies on Legionella and drinking water in the United States. Knowingly or unknowingly these schools are essentially cheating the test.

And there is no requirement that schools test for Legionella. Nor is there a mandate that they report it if they do find it. Health authorities are required to report to the C.D.C. cases of illness caused by Legionella, but not the presence of the bacteria. Some of the schools in both Ohio and Pennsylvania opened their doors to students this week despite being unable to confirm the elimination of Legionella, which can take weeks.

Dr. Whelton said that if more schools tested for the bacteria, more would likely detect the problem. But it remains to be seen how many will choose to do so.

“If parents haven’t heard from their schools about whether or not testing is being conducted, then they should start asking questions.”