The Guardian view on the US Democrats: Biden seized his moment 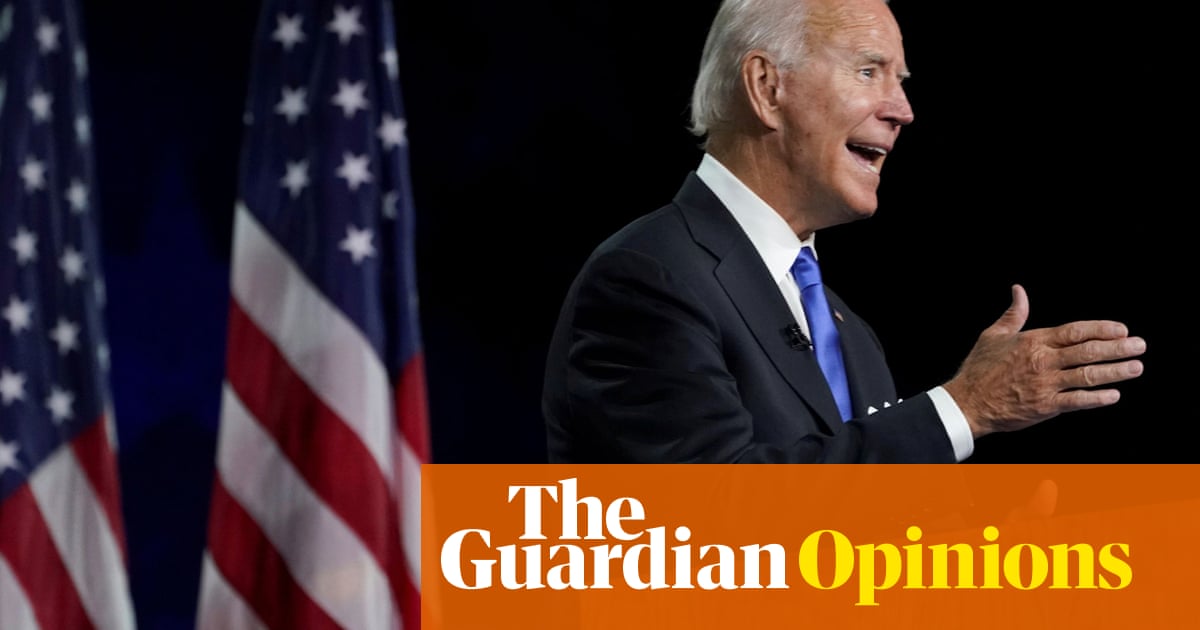 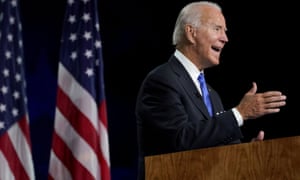 Joe Biden speaking during the Democratic convention. ‘His offer of hope and light is well crafted for such dark times.’ Photograph: Kevin Lamarque/Reuters

There have never been two campaign gatherings like this week’s US Democratic convention and next week’s Republican one. Stripped to their essentials by the coronavirus pandemic, the 2020 conventions cannot match the energy of normal years. Yet the big speech by the presidential candidate at the convention remains a defining campaign moment, and this year is no different. The greater severity imposed by the virtual convention is also appropriate. For this is not a normal US election year. It is one in which the central contest between Donald Trump and Joe Biden will define the future of the United States and the world like few others.

Because of the constraints, the Democratic convention lacked true razzmatazz. In that respect it was tailor-made for Mr Biden’s decent, stubborn but markedly unexciting political message. And yet the lack of glitz had certain advantages. It meant that the nightly coverage offered to American voters this week was more serious-minded. The televised broadcasts were full of ordinary people’s video accounts of what they are going through as a result of the pandemic, recession and racism. The format also meant that Mr Biden could use his acceptance speech to cut to the chase about the issues at stake in November’s election, rather than play up the rhetoric that would have been expected in a packed hall. In any case, Barack Obama had powerfully supplied that form of oratory the previous evening.

Mr Biden nevertheless delivered an effective and successful speech. He did not mention Mr Trump by name at any point. Yet everything he said in his 25-minute address was completely explicit about the profound contrast between the two candidates. America was experiencing “too much anger, too much fear, too much division”, he said. In the heart of the speech, he zeroed in on four policy crises which together define the choice voters must confront – the worst pandemic in a century, the worst economic crisis since the 1930s, the biggest movement for racial justice since the 1960s, and the “undeniable” threat of climate change. Together, these crises faced America with a perfect storm, through which Mr Biden promised “a path of hope and light”. Such language can sound vacuous, but Mr Biden was absolutely right about the four great issues. He has also usefully cast himself as the candidate of optimism.

The Democratic leader made much of his claims to be a unifier. His choice of Kamala Harris as his running mate has helped. The convention also went some way to unite this party for the task to come. There were significant speeches from defeated rivals, notably Bernie Sanders, who has rallied behind Mr Biden since the primary season ended and played his hand well during subsequent policymaking processes. Elizabeth Warren made a strong and humane contribution too. Mr Obama’s speech was a stirring reaffirmation of his belief in an American system of democracy and justice which Mr Trump has done so much to undermine and in which the faith of many natural Democrats has been deeply challenged by events including police killings. Although Mr Biden is a candidate from the heart of old Democratic politics, it is worth noting that this year’s convention had a watershed feel because it was the first for decades not dominated by the Clintons.

Mr Biden will not be an inherently exciting Democratic candidate. There are good reasons for asking whether he has either the vision or the capacity to turn post-Trump America around successfully. He is instinctively happier reaching out to the middle ground than driving the new radical agenda that the times also demand. But he came through this week much better than some feared. His campaign, like his life, has shown resilience and judgment. His offer of hope and light is well crafted for such dark times. Now Mr Biden must also beat Mr Trump. Now it gets harder. The world is willing him on.