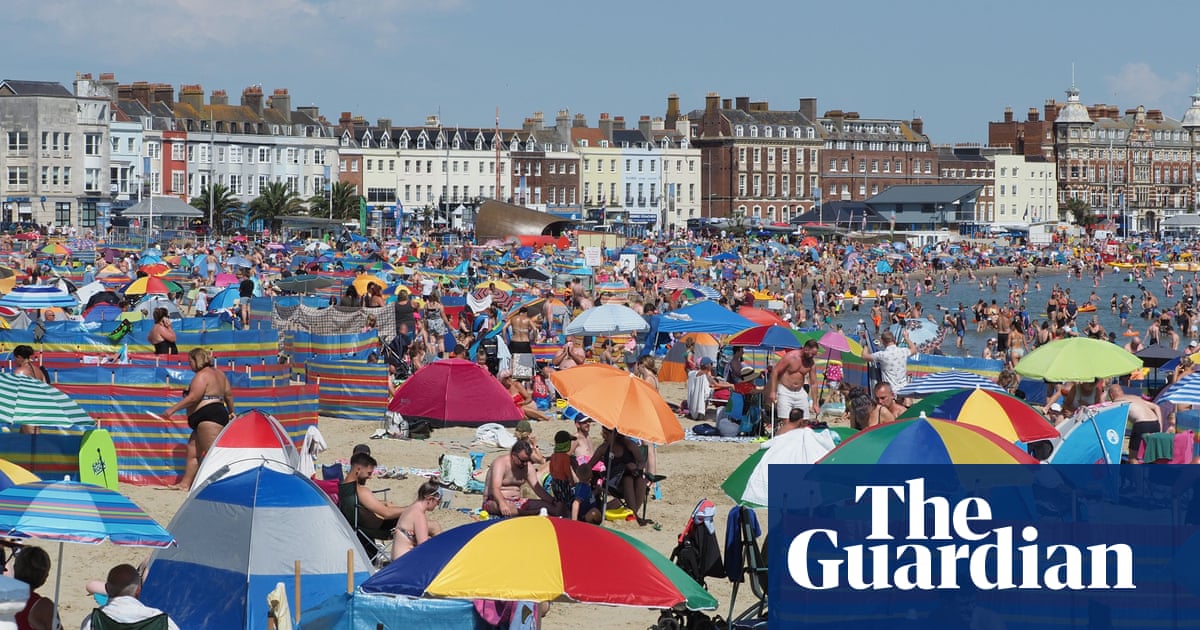 As people flock to beaches and parks this weekend after the hottest August day in 17 years, a leading health expert has warned that such heatwaves will become more regular – and highly dangerous – if nothing is done to curtail the climate emergency.

Temperatures reached 36.4C (97.5F) in Heathrow and Kew Gardens on Friday, the highest on any day in this month since 2003, the Met Office said. The hot weather in some parts of the country is expected to give way to thunderstorms early next week.

Ilan Kelman, a professor of disasters and health at University College London, warned that the sort of weather being seen in southern England, which poses a serious risk to vulnerable people, would become more regular unless action was taken.

“These temperatures are unfortunately in line with the expectations for heat under climate change, which is one of the most concerning health impacts,” he said.

“Without stopping human-caused climate change, these levels of summer heat and humidity will become regular, making it highly dangerous for us to be outdoors and even indoors without continual cooling. Air pollution can also worsen under heat with its knock-on health effects, such as for cancer and asthma.

“Irrespective of urban heat islands and natural climate variabilities, the human signal in climate change is showing in these heat patterns.”

HM Coastguard has reported a surge in the number of callouts on Friday as people flocked to beaches. About 70 incidents required a response in the morning, which the coastguard said was above average for this time of year, as beachgoers arrived as early as 9am.

“The coast is very busy today and that’s grown across the morning and will continue to grow as the day goes on,” said Matt Leat, of HM Coastguard. He said he expected to see a similar number of incidents to Friday 31 July, which was the organisation’s busiest day in four years.

“It’s highly possible some of the beaches are the busiest in a number of years,” he said, as the Coastguard warned people to be careful and avoid using inflatables in the water because they can be blown out to sea.

There were also warnings to avoid some crowded beaches on the south coast. By Friday afternoon, Bournemouth, Christchurch and Poole (BCP) council’s beach check app showed 19 of its 24 beaches under red alert, warning people to avoid the areas as safe social distancing is not possible.

The remaining beaches were under amber alert, meaning they were congested and beachgoers should “stay alert”.

Daily weather is caused by the interaction of the strong global heating trend being driven by carbon emissions and local variability. The climate crisis has already made UK heatwaves 30 times more likely and extreme temperatures led to 3,400 early deaths between 2016-19.

The government’s official adviser, the Committee on Climate Change, said on 25 June that “the UK is poorly prepared for the very serious impacts of climate change, including … overheating”.

Recent research showed the likelihood of the UK experiencing 40C temperatures for the first time was “rapidly accelerating” because of the climate emergency. Another analysis indicated that, even with some cuts in emissions, London would have the same climate by 2050 that Istanbul has today, Leeds would be like Melbourne, and Edinburgh like Paris. All three foreign cities have already broken 40C temperatures.

“Climate change is exerting an increasing impact on the UK’s climate,” said Mike Kendon, lead author of a Met Office climate report published last Friday. “Since 2002 we have seen the warmest 10 years in the series. By contrast, to find a year in the coldest 10 we have to go back to 1963 – over 50 years ago.”

The coronavirus lockdowns across the world have led to sharp drops in carbon emissions, but this short-term action would have “negligible” impact on the climate emergency, a study published on Friday found.

However, the research also showed that putting the huge sums of post-Covid-19 government funding into a green recovery and shunning fossil fuels would give the world a good chance of keeping the rise in global temperatures below 1.5C. The scientists said we were now at a “make or break” moment for keeping below this limit, which was agreed by the world’s governments to avoid the worst impacts of global heating.

A wide range of business, economics, health and environmental groups are urging governments including the UK to implement a green recovery.

Ishani Kar-Purkayastha, a consultant in public health at Public Health England, said that while many people welcomed spells of warmer weather, others found it difficult to cope. She said those recovering from Covid-19 or self-isolating, as well older people and people with underlying health conditions, were particularly vulnerable.

“If you need to provide care to someone at risk from hot weather, follow government guidance on how to do this safely. The most important advice is to ensure they stay hydrated, keep cool and know how to keep their homes cool.”