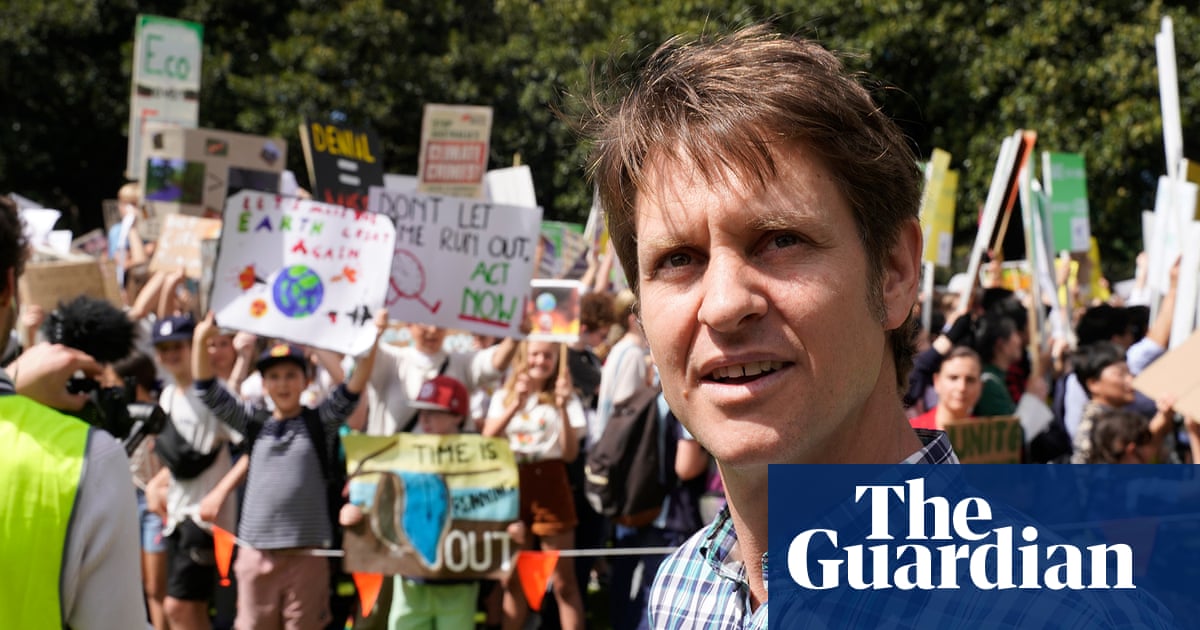 There’s a scene in Fight for Planet A that is both absurd and thrilling. The host, Craig Reucassel, has tracked down the prime minister, Scott Morrison, at an event at a Sydney beach. A pile of black balloons representing Australia’s carbon emissions have been attached to the back of his shirt and as he runs down the beach chasing Morrison, one really does wonder if he’ll just lift off and float away. The prime minister’s minders stop Reucassel before he can tackle the prime minister who, in bare feet and boardshorts, is walking away as quick as you can in soft sand. But the metaphor is obvious: Morrison does not want to engage with Australia’s outsized emissions problem.

Over three episodes, the team that made the ABC’s highly successful War on Waste delve into the more abstract but urgent issue of carbon emissions, and with it a vital question: how do you convince Australians that something they cannot see represents their greatest existential threat?

Fight for Planet A uses balloons to give Australia’s emissions a visual representation, and right from the first episode, we’re left in no doubt that there are too many of them. But what to do about it? And do we have the bandwidth to deal with the climate crisis now given everything else that’s going on in the world?

The onset of the coronavirus pandemic initially meant the air date for the show, which was filmed last year, was pushed back from June to August. Stephen Oliver, manager of documentaries at the ABC, thinks that now is the time to get the climate back on the agenda.

“No one knew how long the pandemic would last, how serious it would be, how it would change people’s psychology. It’s still bad, but to some extent, with the exception of the situation in Melbourne, we have come to terms with it,” he says.

And although global lockdowns have caused emissions to plummet, it is long-term behaviour and policy change that will make a difference in the long term. So how do we make that happen?

Fight for Planet A is a solutions-based show that aims to empower viewers to cut their own emissions at home and in their communities.

By way of example, five Australian households were chosen to take on the show’s “climate challenge” to reduce the carbon emissions generated by the energy they used, their modes of transport and their food production.

Can the wealthy family with underfloor heating and a massive TV for their pets cut their electricity bill? Can the share house of five blokes use less hot water and skateboard to uni instead of driving an old banger?

Those strategies for individuals wanting to reduce their carbon footprint include everything from changing showerheads so less water is used, to ditching the car, to switching to solar panels. There’s a good segment on how easy it is to cut emissions in schools by turning off power points at the end of the day.

Other solutions are more expensive and thus more difficult – such as trading in your old fossil-fuel-guzzling car for an electric vehicle (the cheapest in Australia starts at around $50,000).

When asked if a lot of the individual environmental fixes are geared towards the rich, Reucassel told Guardian Australia: “People who are wealthier – say, in the top 50% of income – have a larger carbon footprint. They travel more, their houses are bigger, they use more energy. We need to call on the rich people first – we shouldn’t be putting more of the burden on poorer people.”

But does all this community and individual empowerment let the government and big business off the hook?

Reucassel says: “I wouldn’t have done this show if it had only been about individual change. But people becoming involved and interested in an issue changes the political debate and more strongly influences the business debate. We can underestimate the role that the public can take in leading.”

Councils too have proven to be proactive when it comes to grassroots climate action, says Reucassel, “much more so than leadership at a federal level, which tends to be really depressing”.

“But we can all solve the problem of climate change. This is empowering. We can give people solutions rather than just bunker down waiting for more horror to hit us.”

“The hardest part is getting people to visualise emissions,” says Reucassel. But knowledge is power. “In Australia, change is up against far more vested interests – that’s why we need a population that is knowledgeable and engaged.”

Oliver agrees. “It’s about getting people to be more engaged in the issue instead of feeling a bit angry and hopeless. If you only focus on the big corporations and the government you can get angry, frustrated and just kind of retreat from the conversation.”

• Fight for Planet A is showing on ABC on Tuesdays at 8.30pm

TV Taught Me About AIDS. ‘It’s a Sin’ Reminded Me How Far We’ve Come.