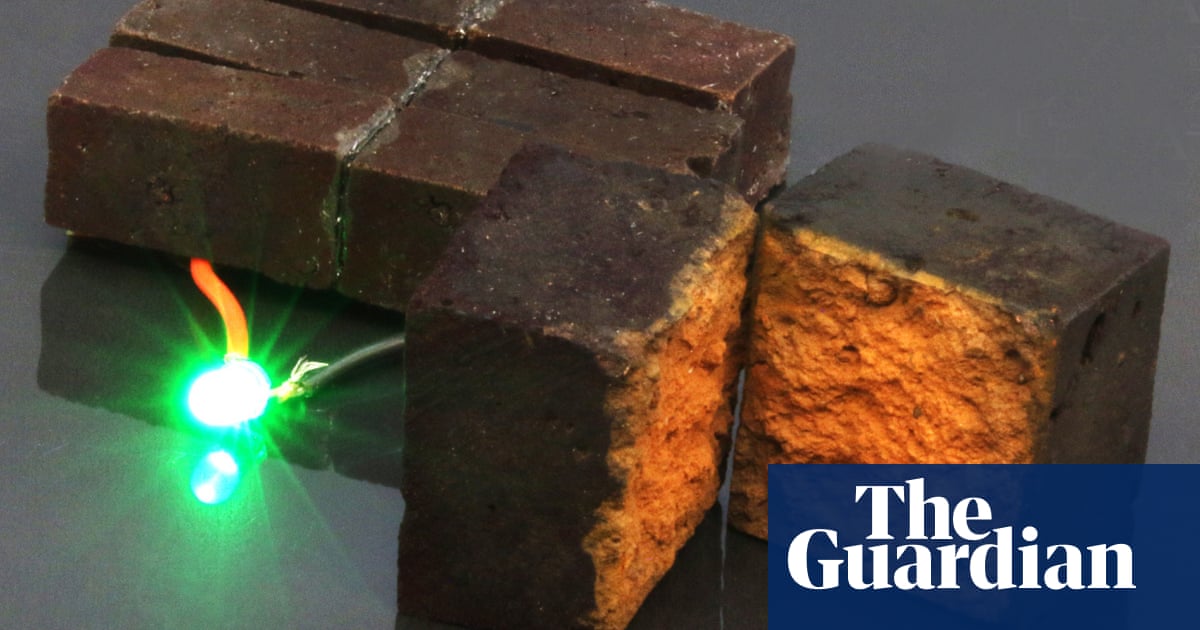 The humble house brick has been turned into a battery that can store electricity, raising the possibility that buildings could one day become literal powerhouses.

The new technology exploits the porous nature of fired red bricks by filling the pores with tiny nanofibres of a conducting plastic that can store charge. The first bricks store enough electricity to power small lights. But if their capacity can be increased, they may become a low-cost alternative to the lithium-ion batteries currently used.

Researchers around the world are working to increase the energy density of supercapacitors, as well as the charging speed of batteries. Finding better ways to store electricity is a crucial part of fighting the climate crisis, as it would allow abundant but intermittent renewable energy to be stored until it is needed.

“A solar cell on the roof of your house has to store electricity somewhere and typically we use batteries,” said Julio D’Arcy, at Washington University in St Louis, US, who was part of the research team. “What we have done is provide a new ‘food-for-thought’ option, but we’re not there yet.”

The energy density of the first power bricks, reported in the journal Nature Communications, is just 1% of that of lithium ion batteries. D’Arcy believes this can be increased tenfold by adding materials such as metal oxides to store more charge in the brick, which would also make the power bricks a commercial proposition.

Dan Brett, a professor of electrochemical engineering at University College London, UK, said: “Heat has been the overriding area of interest when considering energy storage within the fabric of buildings. This study shows there is potential to store electrical energy as well. The performance is a long way short of bespoke supercapacitors, but the principle is proven and there is significant scope for improvement.”

The researchers created small prototypes of the power bricks using chemical vapours to react with the red iron oxides in the bricks and then to form a network of plastic nanofibres. A special plastic, called Pedot, was used as it is a very good conductor of electricity. The reactions turned the red bricks a dark blue colour.

Another advantage of supercapacitors is that they can be charged and recharged many more times than batteries before losing their ability to store electricity. The power bricks can be cycled 10,000 times before their capacity falls significantly.

The charge stored by the first bricks is too small to give a shock when touched. But a wall of connected bricks would need an insulating coating and the scientists demonstrated this using epoxy resin, which even allowed the bricks to work underwater.

The reactions used to create the power bricks may have a small weakening effect on their structural properties, D’Arcy said, but in any case bricks were most commonly used today in houses as decorative facades.

Richard McMahon, a professor of power electronics at the University of Warwick, UK, said the research was intriguing. “Energy storage is of great contemporary interest, especially in the electrical form. [But] although this work is an interesting demonstration of a possibility, it is a long way from practical application.”

The cost of lithium ion batteries has plummeted by 90% since 2010, and pumped hydro power schemes are effective where there are mountains. But storing large amounts of electricity remains a challenge, prompting a search for alternatives.

One company uses gravity to store energy by stacking large bricks into a tower, then releasing the energy by dropping the bricks back to the ground. Similar schemes using heavy weights and mineshafts are also being explored.

Compressing air into a liquid to store energy is another option, with a large plant now in construction near Manchester, UK. Some experts are backing hydrogen, which can be produced by splitting water using renewable energy.