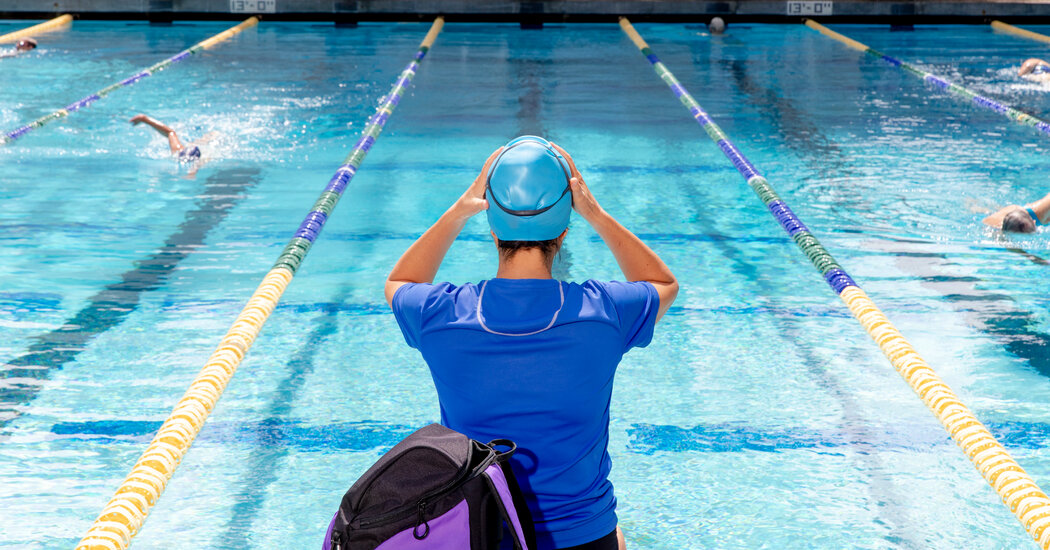 Reopenings around the country have varied, but one thing is consistent: Summer crowds are not allowed.

At El Cerrito Swim Center, swimmers are allotted 45 minutes and a lane to themselves.Credit…Cayce Clifford for The New York Times

The timeless soundtrack of a public pool in summer is largely silent this summer. No shrieking children, no splashy entrances or periodic whistle blasts and curt admonitions from lifeguards (“Walk! Don’t run!”), little of the buzzy hum of happy people chatting in and around the water.

On a recent weekday morning at El Cerrito Swim Center, a popular East Bay pool complex in Northern California that normally has more than 550 visitors a day, the air was so still that one could hear birds chirping and the shuffling of flip-flops as a small group of masked patrons tentatively filed onto the pool deck for their allotted 45-minute lap swim.

Eric Rhodes was one of those swimmers. It was the first time in four and a half months that he’d been back. Pre-pandemic, Mr. Rhodes, 70, hits the pool three times a week.

One of those sessions is usually a practice with the Berkeley Aquatic Masters team, of which he has been a member for two decades. How did it feel to get back in the water? “Slow,” he said with a sigh. “But it was really great to jump in and be aquatic again, instead of land-borne.”

The pool had reopened only two weeks earlier and accommodations for this pandemic summer were in effect. Would-be swimmers have to make reservations online. Socially distanced staff go through a health checklist with patrons in the parking lot, everyone in masks.

Lifeguards are equipped with the usual red rescue tubes, but also disinfecting pump bottles. And each lane of the 10-lane pool is designated for one swimmer at a time (two swimmers if they’re from the same household).

During the 15-minute break between swim sessions, lifeguards must now be bouncers and enforce mask wearing and social distancing rules. They act as sanitation workers as well, spraying disinfectant all over outdoor showers and high-touch surfaces like hand railings and ladders. One of the lifeguards on duty, Alejandra Robins, had a Zen-like approach to her newfound duties.

“In some ways this is nice, because it’s a lot quieter and easier to focus on my job,” said Ms. Robins, 19, who grew up in El Cerrito. She will be heading off to her freshman year at Vassar College this fall, where masks and social distancing will also be the rule.

“Like everything else right now, the pool experience is much more restricted,” she said. “But I do miss the bigger community I usually work with, that random come-and-go of patrons. To me, that’s what makes it so pool-like.”

Relaxing at a pool in a pandemic feels like a Prohibition-era metaphor. We’re all craving a certain sweet liquid escape, but most of us aren’t allowed to have it. There are laws regulating access. It’s not available everywhere, but people with connections are more likely to find a way to get it. And temperance, it turns out, is mighty hard.

The structure of pool reopenings around the country has varied by timeline and degree, but one thing is constant: summer crowds are not allowed. In Illinois, a handful of community pools reopened in mid-June at a maximum of 50 percent capacity, but all public pools within the Chicago Park District remain closed.

On July 24, the New York City Department of Parks and Recreation began a phased reopening of 15 of its free public swimming pools, including the Kosciuszko Pool in Brooklyn, Wagner Pool in Manhattan and Liberty Pool in Queens; the pools can operate at 70 percent capacity.

Swimmers are required to wear a face covering for entry, to be removed only when they enter the water. Six feet of social distance is required between households.

In California, state health guidelines have allowed for pools to reopen with the approval of local authorities, but the devil is in the details. Most municipal pools run at a deficit even in non-coronavirus times, said Beth Frazer, the recreation supervisor of facilities and aquatics for the city of El Cerrito.

Her challenge has been to serve as many in the community as possible while adhering to health guidelines laid out by the city and county, as well as by the Centers for Disease Control and Prevention.

“We’re the only pool open on this side of the East Bay hills, which means we have very limited capacity and an increased population to serve,” Ms. Frazer said, noting that area pools in the surrounding cities of Richmond and Albany remain closed. She said that it’s an impossible puzzle: “Right now we have only 90 or so time slots a day — and 200 to 300 people who want to swim.” People with reservations come and line up outside according to lane assignment.

The facility normally serves a diverse population across age, race and income, with a full calendar of swimming lessons, camps, swim team and water polo practices, water aerobics, lap swim, rec swim, birthday parties and lifeguard training. Without those programs and the revenue they bring in, the cost of admission has gone up — from $7 to $10 for residents and $12 for nonresidents — much to the chagrin of those in the community who are used to more affordable fees.

“The expense is a limitation. I can’t afford to go more than once a week,” said Carol Jameson, 62, who lives in Richmond. “My swimming before the pandemic was rich in so many ways that I took for granted. But I do understand they’re doing the best they can and that all of these restrictions are necessary for our health.”

One of those entrusted with maintaining the health of the pool and its patrons is Anthony Wong, of Two Brothers Pool & Spa in nearby El Sobrante. Mr. Wong has been taking care of the pump room and pool at this swim center for 20 years; he comes by once a day to check and maintain the facility’s chemical levels.

“It’s a whole new world — every city is being different right now with its rules, so it’s been super-hectic,” he said. “With the swim center it’s easier, because swimmers come by appointment only and they have staff to wipe stuff down and keep things clean.”

“We’re on a lighter scale with chems because daily use is cut down to about an eighth of the usual numbers,” he said, referring to chemicals.

Family swim hours, which finally started up again on July 24, are a far cry from the usual sprawling splash park and rec pool water slide experience. On a recent afternoon, two groups of up to five people each were allowed to swim on opposite sides of a divided lane. But Lisa Faria, who was among the first in line with a reservation for her husband and two daughters and herself, was happy.

“It was short, only 45 minutes, but the kids had enough time to pretend to be mermaids and have fun and practice freestyle,” Ms. Faria said. “It was great. Everything felt clean. I could smell the hand sanitizer.”

Over the last few months, her daughters — Gaby, 9, and Emma, 8 — had been keeping a close eye on the swim center, wondering when it would open. Most summers, she said, the girls attend a parade of swim camps, swim lessons and birthday parties here.

Swimming gives her family a sense of peace and lightness in what can feel like an all-too-heavy and overwhelming world these days, Ms. Faria said. “Fingers crossed that this keeps going, that it can work,” she said. “I hope we find many more days of swimming.”

Bonnie Tsui is the author of “Why We Swim.”

NASA Needs to Find Ice on the Moon. This Rover Will Lead the Search.