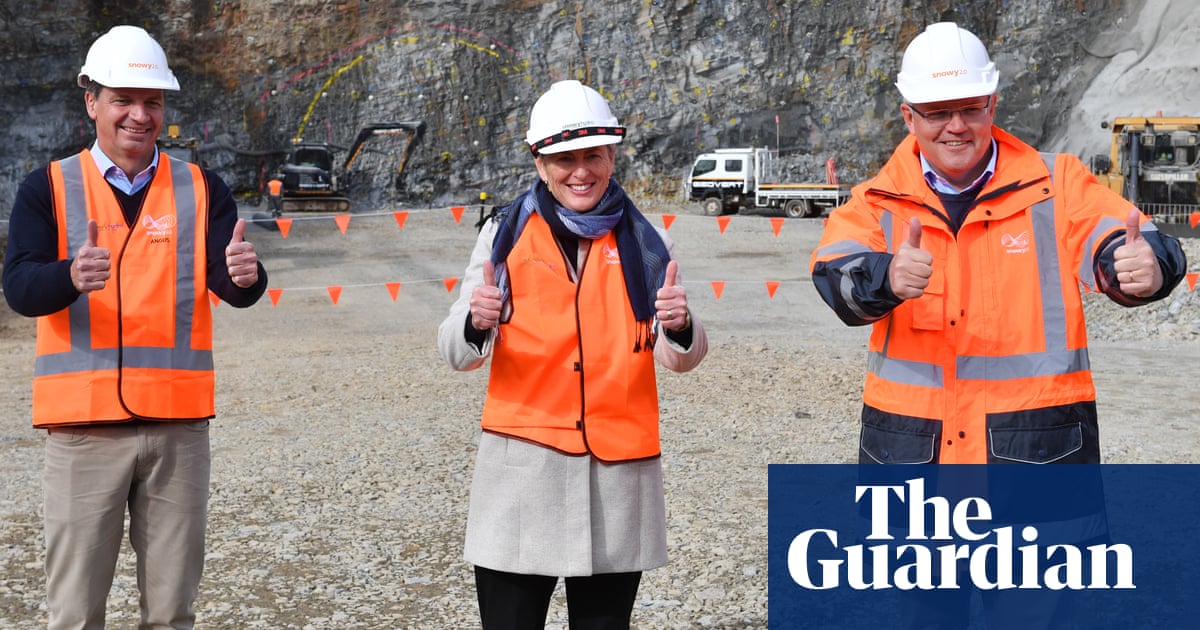 Scott Morrison has announced federal approval for the Snowy 2.0 project in the closing days of the Eden-Monaro byelection campaign, declaring Snowy Hydro would spend $100m on measures aimed at allaying environmental concerns.

The prime minister told reporters on Tuesday he was excited to announce “the thumbs-up, green light for the Snowy 2.0 project to now move to its full implementation phase” with construction to begin over the next two years.

“We know we need to get this up and running to meet our timetable for getting this energy into the system, to getting our emissions reduction targets achieved, and ensuring that the jobs that are so necessary now … as we’re building our way out of the Covid recession,” Morrison said at a media conference, where he was introduced by the Liberal candidate for Saturday’s byelection, Fiona Kotvojs.

Last month the New South Wales government gave its approval for the 2,000-megawatt pumped hydro storage project in the Snowy Mountains but it still required federal environmental approval before work could start.

The federal environment minister, Sussan Ley, said on Tuesday she had signed off the final approval and highlighted a commitment by Snowy Hydro to spent $100m on biodiversity and environmental enhancements.

These funds would include $73.8m for an offset fund through the NSW National Parks and Wildlife Service “to protect threatened species and deliver long-term conservation outcomes”, a government statement said.

Ley thanked Snowy Hydro for its work on the environmental impact statement “to make sure that the threatened species, the communities, the precious amenity of Kosciuszko national park will be protected, remediated and even enhanced”.

“Remember that the construction footprint for this second stage of this nation-building renewable energy project is just 0.1% of the park,” she said.

“The actual final operating area is just 0.01%. So I’m giving a sense of the vastness of Kosciuszko. Yes, it’s an intense activity but we will, in remediating, in enhancing, in looking after the species that are so important to making this park special, invest through Snowy Hydro – they will invest $100m.”

Snowy 2.0 was announced by the then prime minister, Malcolm Turnbull, in March 2017 as a 50% expansion and transformation of the historic Snowy scheme to include pumped hydro storage that could be called on to provide electricity when required.

He said the project would provide some of the “firm” generation needed as more variable wind and solar power was introduced into the national grid. It was expected to cost $2bn, a sum that has since more than doubled.

The development has been criticised by some energy specialists, environmental groups and scientists. In March 30 engineers, economists, energy professionals and environmentalists wrote to Morrison to call for a final decision on the development to be delayed to allow an independent review, and said there was evidence it would cost far more and deliver far less than promised.

They said it would permanently damage a much larger area of the Kosciuszko national park, that about 40% of the energy would be lost before it reached consumers and it was likely to cost at least $10bn. The director of the Victoria energy policy centre at Victoria University, Bruce Mountain, said there were cheaper and more environmentally friendly alternatives.

Mark Lintermans, an associate professor at the University of Canberra, resigned as chair of the NSW threatened fishes committee after the project won state government approval in May.

Lintermans said he would not serve an administration that had “wilfully ignored” the development’s impact on species including the critically endangered stocky galaxias, which he said was likely to be driven to extinction in the wild. The National Parks Association of NSW described the project as “environmental vandalism”.

Ley was asked on Tuesday how the government could reassure the public that proper care had been taken, in light of the range of environmental concerns raised by expert scientific advisers to government.

She said Lintermans had been concerned about the NSW environmental impact statement and she had asked her department to speak to him.

“Now it’s really important to understand that Snowy will be investing $25m in effectively netting the tunnels that lead from Tantangara reservoir in the incredibly unlikely event that … pest fish could manage to come up the tunnel into Tantangara and damage the natural environment for the stocky galaxia. So we’ve got it covered.”

There would also be a $5m captive breeding program in a separately built weir, Ley added.

It’s not the first time the federal government has sought to highlight Snowy 2.0 as part of campaigning for the Eden-Monaro byelection. The Liberal candidate also introduced Morrison at a press conference at Polo Flat on 19 June, when the prime minister declared that the government was “all in for Snowy 2.0”.