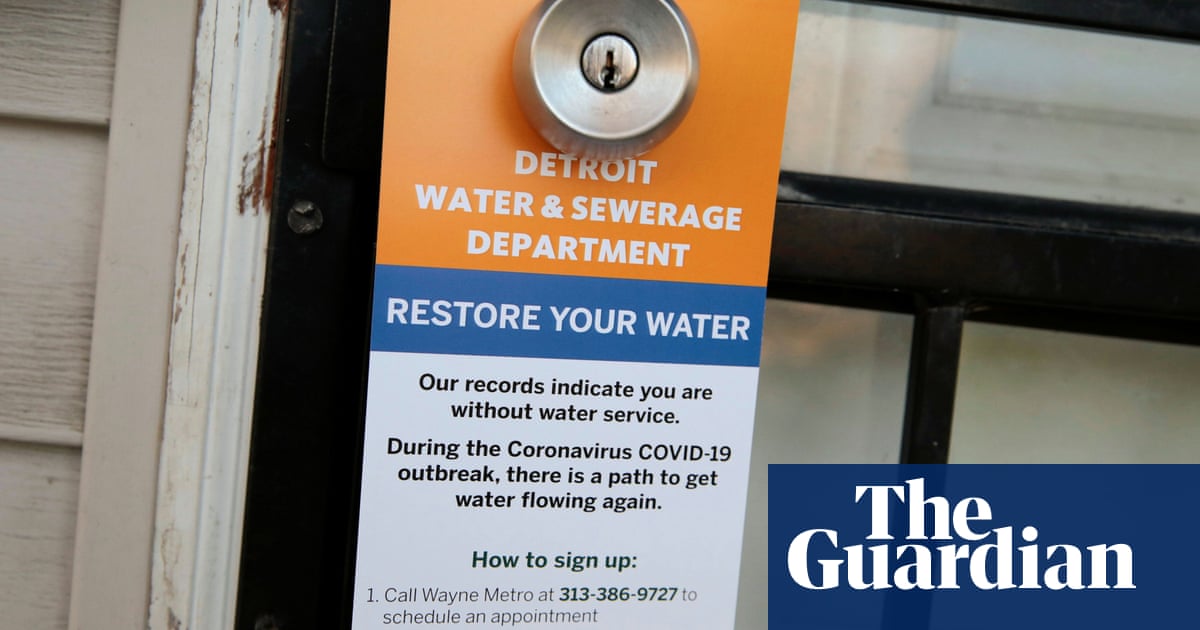 A coalition of civil rights groups have filed a landmark class action to permanently ban water shutoffs for Detroit residents and force the city to implement an affordable payment plan.

Detroit, which has one of the most expensive water rates in the country, has disconnected more than 140,000 households since 2014, as part of an internationally condemned debt collection scheme which has left thousands of vulnerable residents without running water for months or years.

The federal lawsuit, led by the American Civil Liberties Union (ACLU) and the NAACP Legal Defense and Education Fund (LDF), claims the mass shutoffs have disproportionately affected the city’s black residents and endanger the physical integrity of those left without running water.

It comes just weeks after a landmark Guardian investigation into water poverty revealed how millions of Americans risk losing access to water and their homes because of unaffordable water bills.

The plaintiffs are six low-income black residents, whose stories illustrate the bleak conditions suffered by thousands of Detroiters as a result of losing access to running water.

Jacqueline Taylor, a homeowner living off of $860 in monthly social security benefits, received a $1,500 bill in 2016 for water usage during a period when her home was empty while she recovered from a hip replacement at a rehab facility. She spent months questioning the bill, but eventually her taps were disconnected in mid-2018, by which point the water department claimed she owed almost $6,000 in arrears. Taylor lived without water until March 2020, when the utility reconnected her as part of the city’s pandemic plan.

Detroit was the first city to order a moratorium on shutoffs because of the pandemic after health experts warned that frequent hand-washing was crucial to curtail the spread of the virus. The utility has reconnected almost 1,250 households since March, but the lawsuit claims that such temporary measures do not go far enough.

“[When the temporary moratorium expires] Detroiters will once again be left with huge bills they cannot possibly afford, forcing residents back into the cycle of water shutoffs. It is time to throw shutoffs on the dust heap of deeply disturbing practices that contribute to the structural racism our nation is finally attempting to dismantle,” said Mark Fancher, director of the ACLU of Michigan’s racial justice project.

The lawsuit, against the city of Detroit, the mayor, the public water utility, and the Democratic governor, Gretchen Whitmer, alleges that the mass shutoffs violate the 14th amendment to the US constitution, state civil rights law and the Fair Housing Act because they disproportionately affect black residents.

According to the legal filing, between January 2017 and July 2018, 95% of water shutoffs in Detroit occurred in majority black neighbourhoods, while neighbourhoods with minority black populations had, on average, 64% fewer shutoffs than those with mostly black residents. These disparities are statistically significant and persist even when controlling for differences in income.

“People should not be punished for being poor and black,” said Coty Montag, senior counsel at LDF. “If state and city officials are serious about ending structural racism, they can start by putting an end to Detroit’s water shutoff policy and instituting an effective water affordability plan.

In a separate class action, the LDF is suing the city of Cleveland for the alleged discriminatory use of liens, legal claims on properties for overdue water bills, which increase the risk of foreclosure.

Even before the coronavirus economic fallout, Detroit’s poverty rate was about three times the national average at 35%, which made rising water and sewer bills simply unaffordable. Some families have been forced to live without water for years, or abandon their homes, while others are trapped in a cycle of water insecurity with repeated disconnections.

One plaintiff, Lisa Brooks, lives in rented accommodation with her two children, aged 14 and 16, with only $1,200 in monthly disability benefits. She has multiple chronic medical conditions,while her 16-year-old son has asthma and uses a nebulizer, which requires water. The family was disconnected in 2018 for about a year, after which Brooks entered a payment plan that cost approximately 17% of her monthly income. It was simply unaffordable, and the family was again disconnected in the winter of 2019 and lived without running water until March 2020.

Both Taylor and Brooks owe money to the water utility and will be at immediate risk of disconnection when Detroit resumes shutoffs after the pandemic.

The civil rights coalition is calling for a total ban on shutoffs in Detroit and an income-based water affordability billing plan, similar to the one adopted by Philadelphia and planned for Baltimore.

The Detroit-based lawyer Alice B Jennings said: “For every human being who lives without water, there is a story of suffering.”

In a statement, Gary Brown, director of the water and sewerage department, questioned the relevance of the lawsuit given that shutoffs were suspended on 9 March.

“[It’s] been so successful, those suing today could not find a single plaintiff in Detroit living without water service and, in fact, the plaintiffs benefited from current programs.”

He added that the mayor had recently announced a new community outreach team to work with low-income residents to ensure they do not lose water access, while the governor has extended the moratorium on shutoffs until the end of 2020 and secured $25m to provide bill forgiveness for water and energy debts incurred during the pandemic.

A spokesperson for Whitmer said: “We do not comment on pending litigation, but going forward, the governor remains committed to working with the legislature and the federal government to develop long-term policy solutions to make water affordable for every family in Michigan.”