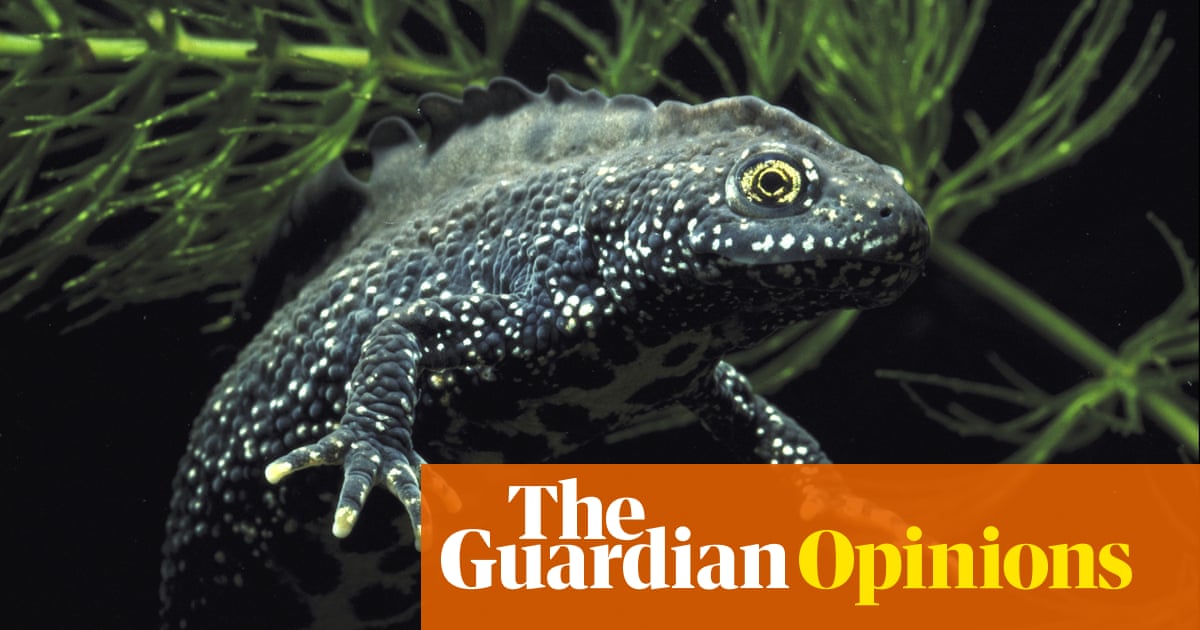 First, I should lay down my cards and show my hand. My name is Jules, and I am a card-carrying fan of newts. I have a pond. I once ran an amphibian helpline for people with questions about newts. I have worn a newt costume at family events. I can’t stress this enough: I genuinely like newts.

Earlier this week, newts featured in Johnson’s Build, build, build speech – where plans were announced to revive Britain’s flagging economy with a programme of construction – housing, hospitals, prisons, roads, schools. But this wasn’t a star turn for newts. Far from it.

“Covid-19 has taught us the cost of delay,” Johnson said in the speech. “Time is money. And the newt-counting delays in our system are a massive drag on the productivity and prosperity of this country.”

By “newt-counting” Johnson is nodding to the EU’s Habitats Directive, which sees countries under EU and UK law obliged to offer protection to the most regal of newts, the great crested newt. This means that its habitats (ponds, mostly) require protection from those eager to demolish them to make way for other things, and, in some cases, the requirement that new ponds be dug for them if this is not possible. To gauge whether great crested newts may or may not be present on a site before any building takes place, a survey is sometimes undertaken – newts are “counted” in Johnson-speak.

At this point, you may find yourself duty-bound to tell me some things you think you know about newts and other threatened species (such as bats) that apparently hamper the economic growth of our country. You’ll tell me that newts slow down the speed at which housing developments can be built, leaving people in the hands of rented accommodation for longer. You’ll tell me that great crested newts can be quite common locally in parts of Britain, unlike in the rest of Europe, but we have to protect them because of some arcane EU law. You’ll tell me that they add thousands of pounds to the (cash-strapped) developer’s bill.

Well, firstly, it’s certainly true that we appear to be slower than other countries in Europe at building houses, but is it really the fault of newts and other threatened species? According to 2018’s independent government review into build-out rates (commissioned by former chancellor Philip Hammond) the answer is no. Apparently, the problem is that developers are often too fixated on three-bedroom properties in the £400,000 price bracket whose release on the market can be staggered to “guarantee a steady stream of buyers”. It’s this, more than anything else, that slows things down.

The idea that protected species law is written on some Brussels tablet of stone is another straw man. Yes, great crested newts are legally protected, but the way we implement that legislation regularly changes. Last year, for instance, the government announced to great fanfare that it was streamlining the whole process of issuing newt licences, so that developers can get to work more quickly. Strange that Johnson didn’t refer to these actions, undertaken by the previous Conservative government, which he waspart of. Nope, no point. We need a scapegoat, he thinks. Again.

This is a shame because great crested newts really should be something we celebrate in Britain. The new ponds that great crested newt mitigation encourages, for instance, can be of important local value. In fact, if you live in a new housing estate and enjoyed your lockdown walks next to a gorgeous leafy pond, it may be newts you have to thank. In this way, rather than inhibit growth, the great crested newts (and the legislations they are afforded) can help communities retain, even enhance, their economic value over time. These ponds also store carbon at a rate almost unmatched by any other terrestrial habitat. And crucially, each new pond counters the loss of the 500,000 countryside ponds (each supporting thousands of species) that were lost or filled in during previous decades.

What’s most frustrating about all of this bluster is that it takes us away from the bigger picture. That rebooting the economy doesn’t happen in a press conference, hard hat on head and wacky grin for the photo-op, but in working in partnership with the organisations that understand the issues, that can help restore nature, tackle the climate crisis, and rebuild communities and local economies in the process. This rhetoric pits nature against economic development and reduces us all in the process.

We all want the UK to prosper. What we don’t need is more straw men and enemies at the gates. It’s not that we want or expect more from Johnson. It’s that, truthfully, we are going to need to end this false dichotomy between the natural world and the economy if we are to emerge from this turbulent time in a better state than before.

Flexible material shows potential for use in fabrics to heat, cool

UK weather: a month’s rain could fall in two hours as heatwave breaks