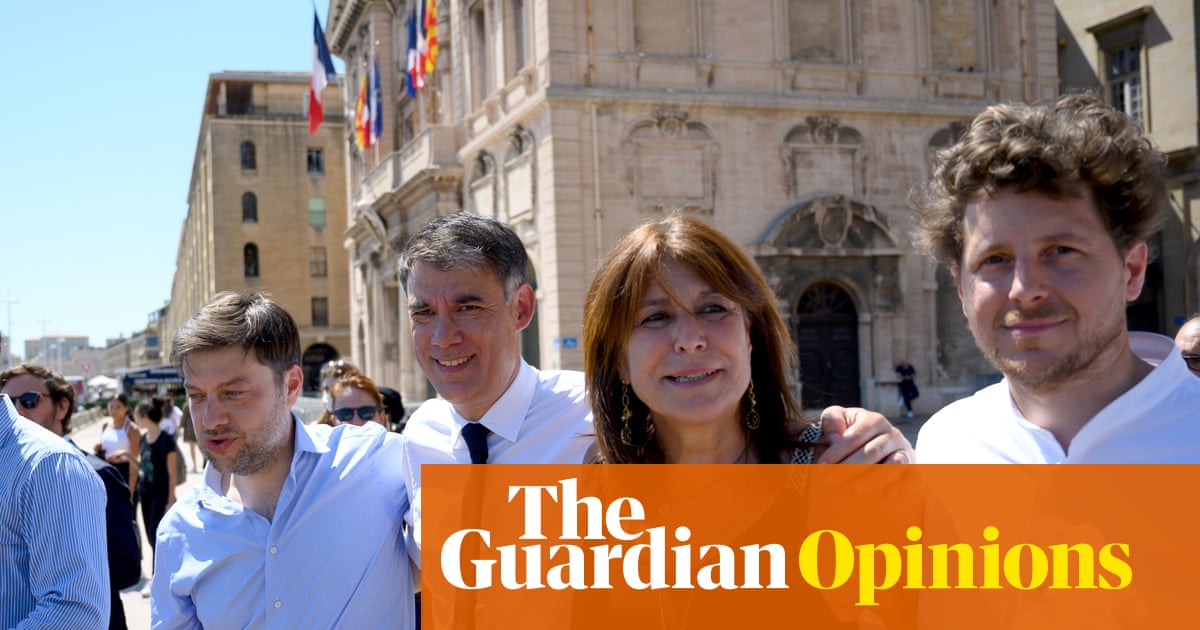 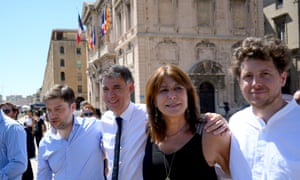 Michèle Rubirola, who has been elected mayor of Marseille, stands with other mayoral candidates of leftwing alliance ‘Printemps Marseillais’ in front of the city hall. Photograph: Christophe Simon/AFP/Getty Images

Lyon, Strasbourg and Bordeaux; Besançon, Poitiers and Tours: the list of powerful cities that turned green, after France’s municipal elections last weekend, was long and impressive. Marseille has been a conservative fiefdom for decades. But a leftwing alliance propelled Michèle Rubirola, the candidate of Europe Ecology – France’s Green party – to the mayoralty. These were totemic victories, turning the once-peripheral Green party into a significant player in urban France.

Sunday’s polls should have taken place in March but were postponed as France locked down. Perhaps because of that delay, and the lingering presence of Covid-19, turnout was low. That may have disproportionately helped Green candidates, whose voters tend to loyally turn out for local elections, and Europe Ecology is still well down the pecking order in national polls. But these caveats aside, the “green wave” in France offers heartening evidence that environmental priorities are truly beginning to shape and influence politics in Europe.

In Ireland, the new grand coalition of Fianna Fáil and Fine Gael depends on the support of the Green party, which will insist that a pledge to cut carbon emissions by 7% a year is kept. Austria is governed by an alliance of the populist right People’s party and the Greens. Eco-targets are being fast-tracked and the Green minister for climate protection, environment and energy is seeking to make Austria carbon neutral by 2040. The Green-dominated bloc of MEPs in the European parliament is also a force to be reckoned with.

The biggest prize of all could be won in next year’s general election in Germany, where polls suggest that Die Grünen may overtake the Social Democrats as the country’s leading progressive force . A “greencon” coalition is seen as a plausible future government, after Angela Merkel stands down following a 15-year chancellorship.

It seems certain that the politics of Covid-19 played a part in generating green momentum in France. The origins of the pandemic, and its effect on globalised supply chains, has led to a renewed focus across Europe on food security, local produce and environmental standards. A forced re-evaluation of urban living has led to new government money for greener forms of transport and a focus on home-working. Cities such as Bordeaux and Lyon can now be expected to be at the forefront of innovation and experiment in designing greener, cleaner cities for the future.

The French president, Emmanuel Macron – whose own party endured a poor election night – has quickly made new environmental commitments in the wake of the results. Mr Macron has promised to provide an extra €15bn to smooth a transition to a low-carbon economy and to implement some of the demands of the citizens’ assembly he convened on the climate emergency. In negotiating bailouts with France’s stricken car and aviation industries, he has demanded stiffer electrification and emissions reduction targets. At a European level, Germany, whose six-month presidency of the EU began this week, is expected to press for more ambitious targets for emissions reductions by 2030.

All these developments are welcome. But a crucial aspect of a great night for the Greens in France should not be forgotten. The famous victories were driven by younger voters living in relatively prosperous cities. In much of rural and small-town France, where the gilet jaunes protests were sparked by a fuel tax rise, environmental radicalism is viewed as a luxury option for the well-heeled metropolitan middle classes. Making the case for a green post-Covid-19 recovery, the triumphant new mayor of Lyon, Grégory Doucet, rightly said this week: “Ecology is not the enemy of the economy, it’s its best ally.” But in Europe’s fearful post-industrial heartlands, this is an argument that still needs to be won.

Booming blooms: how algae are turning the alps pink