Nestlé Weighs Sale of Water Unit in Push Toward Sustainability 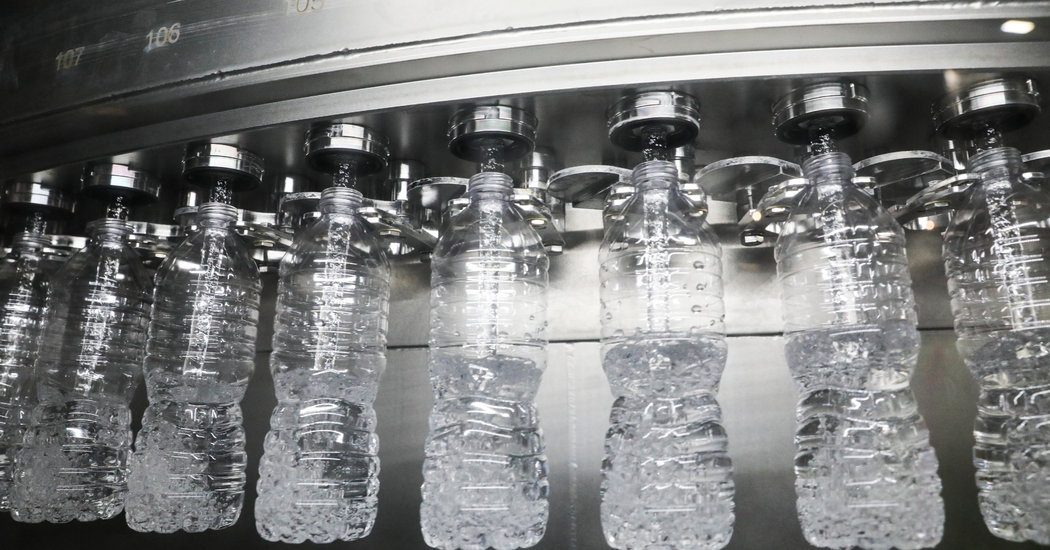 Facing tepid sales and criticism from environmental groups, the Swiss food giant is looking to exit brands like Poland Spring and Deer Park.

Water bottles in production at a Nestlé plant in High Springs, Fla.Credit…Eve Edelheit for The New York Times

Nestlé is considering selling most of its bottled water operations in the United States and Canada, the company said on Thursday. That business accounts for a significant share of the Swiss food giant’s sales but has also drawn criticism from environmental groups.

The company generated revenue last year of 3.4 billion Swiss francs, or $3.6 billion, from American water brands it owns like Poland Spring, Deer Park and Zephyrhills, and from delivering purified water to homes and businesses. That figure does not include higher-priced import brands like Perrier, S. Pellegrino and Acqua Panna, which are more profitable and which Nestlé intends to keep.

Nestlé, the world’s largest food company, has come under fire from groups that say it drains natural water supplies to bottle and sell at a profit. Environmental activists regard bottled water as inherently wasteful, at least in countries with drinkable tap water, because of the energy required to transport it to stores. Bottled water also contributes to the global glut of plastic waste.

With corporations under intense pressure to help fight climate change, Mark Schneider, Nestlé’s Tesla-driving chief executive, has been trying to show that the company can be both sustainable and profitable. Nestlé, whose brands of baby formula, ice cream, chocolate, pet food and coffee are omnipresent worldwide, has been moving into plant-based meat substitutes, promising to reduce sugar and fat content in its products, and aiming to make all of its packaging recyclable by 2025.

Nestlé announced on Thursday that, also by 2025, it will replenish all of the water it draws from watersheds while taking measures to offset the carbon dioxide produced by bottled water production and transport.

Image The Nestlé plant in High Springs.Credit…Eve Edelheit for The New York Times

During a telephone interview, Mr. Schneider said Nestlé had decided to consider exiting the U.S. water brands in part because they were not selling as well as the company would like. American consumers are less willing to pay for bottled water than Europeans are.

Mr. Schneider acknowledged that environmental concerns had hurt sales. Those concerns are easier to address with imported brands that command a higher price, he said.

“As you go higher in the price range, there is more room to invest in the sustainability goals,” Mr. Schneider said. “The environmental agenda and business agenda are very much aligned.”

Mr. Schneider declined to comment on whether there were any potential buyers for the water business, and noted that there were options besides an outright sale, like a partnership. Last year, Nestlé sold a majority of its Herta lunch meat business in Europe to Casa Tarradellas, a Spanish company, but kept a minority stake.

Zephyrhills water at the Nestlé plant in High Springs.Credit…Eve Edelheit for The New York TimesContinue reading the main story

UN-Water Chair: After the pandemic we must build hope through water and sanitation